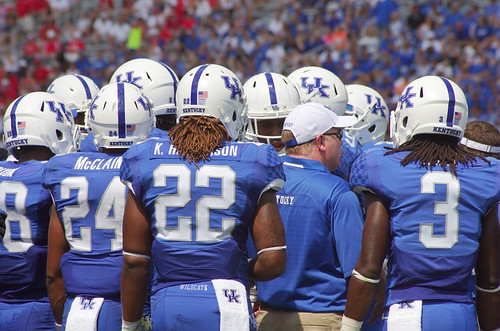 "If we played 10 games, they might nine but not...this...game." "No one, and I mean no one, comes into our house and pushes us around." "Life is this game of inches--and so is football....The inches we need are everywhere around us, in every break of the game, every minute, every second. On this team, we fight for that inch....I can't make you do it. You gotta look at the guy next to you, look into his eyes. I think you're gonna see a guy who will go that inch with you, you're gonna see a guy that will sacrifice himself for this team....Either we heal now as a team, or we will die as individuals. That's football guys. That's all it is. Now, what are you gonna do?" So who should Mark Stoops channel in his pregame talk this Saturday? Kurt Russell as Herb Brooks in "Miracle? Clelcie Ross as Dan Devine in "Rudy"? Or maybe Al Pacino as the coach in "Any Given Sunday"? Upsets happen every week. The first key for the Wildcats to have chance to deliver their own "shock-the-world" moment against Louisville is truly believing they are capable of doing. Ofcourse, the hard part is then to go and take what they want against a very talented rival who is not reading from a movie script. = = = KEY STORYLINES/MATCHUPS --UK secondary v. Bridgewater. Getting Cody Quinn back this week is a big plus, giving the Cats four cornerbacks to rotate against a top-notch receiver corps. None of the four has ever picked off a pass in a college game, so it's goes without saying that Saturday would be a good day to end that drought. --Start fast. Since 2000, Kentucky has beaten Louisville every time it held the lead after one quarter and lost every time it trailed the Cardinals. Over the last two seasons, UK has struggled to score early, managing only 38 first-quarter points all of last season. But last Saturday, the Cats set a school record with 24 points in the first quarter. Nobody expects a repeat of that against UofL but taking a lead into the second period would certainly bode well for the Cats' chances. --Run the ball effectively. There's been some concern among Card fans about their team's so-so rushing attack in the win over EKU. The team with the most rushing yards in this rivalry game has won 17 years in a row. For Kentucky to win that stat, the highly-touted UK front four needs to live up to its preseason hype. = = = NUMBERS GAME --Under Charlie Strong, only six opponents have managed to gain 400 or more yards (one of them was Kentucky in 2010) and the Cards are only 3-3 in those games, with the three wins coming by a combined margin of 16 points. --Teddy Bridgewater is a bonafide Heisman Trophy candidate but his stats at least look more mortal when you can get him into a close game. Last season, in games decided by less than a touchdown, his completion percentage was 62 percent and he threw five of his eight interceptions for the year in those games. (His completion was above 75 percent in the other games). --Two key stats for UK to win would be rushing yards and turnover margin. Last year, Louisville ran for 138 yards per game at home versus only 104/game on the road. And the Cards were plus-11 in turnovers in their home games but had an equal number of giveaways and takeaways in its games away from home. (stats courtesy of cfbstats.com) = = = QUOTE OF THE WEEK "When I walk to class, I hear the fans talk about it all the time. They stop me everywhere I go and say 'beat Louisville'. I heard about (the rivalry) but I never really paid attention to it until I signed here--then my Twitter started blowing up and I knew it was big."--cornerback/junior college transfer Nate Willis, who grew up in Florida. = = = THIS WEEK IN BIG BLUE HISTORY This week marks the 40th anniversary of the opening of Commonwealth Stadium, as Kentucky defeated Virginia Tech 31-26. The UK lineup that day featured a backfield full of players running new coach Fran Curci's veer offense--quarterback Ernie Lewis (Elizabethtown HS) plus running backs Sonny Collins (Madisonville) and Steve Campassi (Franklin County HS). It's also worth noting that Sunday's anniversary of CWS's opening is also the same day that "Stevie got loose" against Louisville in 2007, to lift the Cats to a 40-34 win (that night still gets my vote as the loudest I've ever heard the crowd in that stadium). --listen to Tom each weekday morning at 9:06am eastern on "The Leach Report" radio network --check out tomleachky.com for more of Tom's coverage of the Cats and follow Tom on Twitter @tomleachky and via Facebook for "The Leach Report"