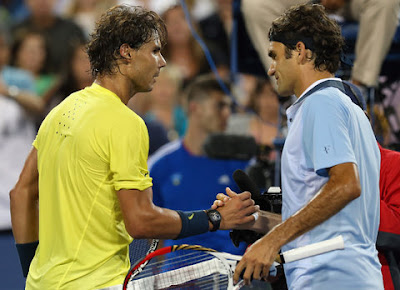 In eight years of covering sports, I have been to a lot of great events. I walked 18 with Phil Mickelson in the Ryder Cup, sat court side as Lebron went after his first NBA title (in Cleveland) and stood on the court as my team won its eighth national championship. And as amazing as those events were, sitting 10 feet from the net watching the 31st edition of Roger Federer vs Rafael Nadal may equalize them.  I am not the type that likes melodramatic, overly poetic attempts to explain the beauty of sport with majestic language that seems to leap off the page (maybe I don't like it in part, because I am not talented enough to do it). But sometimes we have to call a spade a spade and occasionally sports gives you moments that (to quote a guy I knew once in Middlesboro, Kentucky), "are just damn better" than others. No it wasn't a Grand Slam, and yes it was held on an otherwise routine Quarterfinal Friday in Cincinnati, Ohio. But for two hours, there was something special in the air in the otherwise routine Stadium Court here at the Two Directions Open. Two of the best to ever play the game hit new heights (at least for this season) in their game and turned back the clock to produce one of the best non-Grand Slam matches of the year. Andy Roddick tweeted that it was "another level" of tennis and if you watched it, you would most certainly agree. Nadal won in three sets, but the result was almost inconsequential. What mattered is the match happened and the excitement that only these two together can bring to tennis, was repeated once again. When we started "The Outer Courts" at Indian Wells, I had one goal...see Federer and Nadal play one last time in person. For a lot of tennis media, that statement would lead to a collective groan and set of rolled eyes, because for them these two legends playing is old hat. Plus here is a secret about tennis media...they don't particularly love, or even watch, tennis as a spectator. Because their lives are built around the day to day minutia of the tour, big picture moments (especially those they have seen before) are a collective bore. But if you are an outsider, a tennis fan or simply one who loves great sports moments, the scene last night was why you appreciate the sport and it is why I got into doing this blog in the first place. Because of the uniqueness of the event, Drew and I decided early on that we couldn't watch the proceedings in the press box. While the room is nice enough, the smell of stale pretzels, half-empty Diet Coke cans and collective desperation was not the surrounding we wanted for an event to be remembered. As any aspiring blogger would understandably want to do, we wanted to not only get the best view possible, but also bend a few rules in the process. So we made the executive decision (without telling our good Tennis Channel bosses) to sneak where we were not supposed to be and view Federer-Nadal from the best possible seats in the house. For those of you not familiar, there is one bench on court level where photographers are perched, able to sit and take pictures mere feet from the action, without any obstruction to the play. Because of the incredible access, it is for photographers only, and the poster next to the entry way says in big letters "ONLY THOSE WITH A 'M7" PASS MAY ENTER."  Looking at our passes. Drew and I realized that while we were blessed with the "M" credential (for media), we didn't have the "7" (we can't figure out what the 7 is for, but I will guess getting to sit about 7 feet from the action). For many, this lack of accreditation would mean the end of the battle to sit courtside. But not for us. You see, I learned two lessons long ago in life. (1) Pursue whatever you want to happen through all means available...the worst you can be told is "no" and (2) It is better to beg forgiveness than ask permission. If you find an opening, take it and if you are questioned later, play dumb. It nearly always works. Thus Drew and I, complete with no photo equipment more powerful than our iPhone followed a burly men with jeans clinging on to his waist for dear life, looked down as security glared at us and took our seat courtside for the big moment. 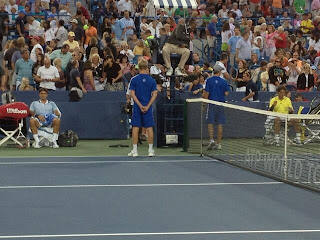 What we were treated to next was an example of why I still believe that a great tennis match is at the very top of the most impressive sporting events in the world. What has always made Federer-Nadal great is the contrast in styles. The grace and elegance of Roger Federer's beautiful game versus the sheer brute strength and force of Rafael Nadal's pummeling of the tennis ball. Federer at his best seems like he is floating on air during play, producing tennis as art with each stroke a detail of exquisite importance to perfect. While in contrast Nadal seems to be in a perpetual, gruesome heavyweight boxing match with the ball, going for a fight-ending knockout with each bicep-flexing forehand. While I had always admired their games from afar on HD television, when viewed in close proximity, their characteristics become even more distinct. Watching Federer from ten feet away is like viewing a painting...his swings are perfect (even when the ball is mishit), his hair never moves an inch and his appearance is immaculate. During changeovers, he simply sits upright in his chair, looking totally at peace and with not a care in the world. In fact, Federer strikes me less as a tennis player than as a model who while posing in a tennis apparel advertisement never actually plays the sport, choosing instead to simply look the part to perfection. Contrast that with Nadal, who from 10 feet looks like as if he just wrestled an ox to the ground, drenched in sweat, clothes sticking to him (no person has ever pulled their underwear out of their crack more during a sporting event in world history), his wild facial expressions suggesting a feeling of constant pain and torture. Nadal doesn't ever look to be at peace during a match, even taking breaks during the match to take his shirt off (to screams of approval from the ladies in the crowd), fix his hair, alter his headband, change his shoes, always in perpetual motion. The contrast is striking and part of what makes their play together great. 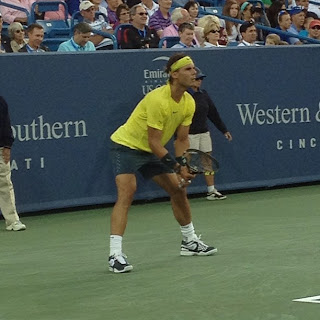 As far as actual play, the first two sets of the match saw Federer at the top of his game, before slipping a bit (and giving away the match) early in the third. Nadal was rusty in set one (he later admitted he was surprised at Federer's good pace), before finding his stride in the final two. In the end, Nadal got the winning result he sought, bringing his overall record over Federer to a somewhat surprising 21-10. However ultimately when I look back at Friday night, my guess is that I will have little memory of the result. Nadal winning a tournament in August, even a Masters 1000 Event will be remembered by almost no one (outside of perhaps the one woman who sat two rows behind me who I overheard saying she has a Nadal pillowcase) when his great career comes to an end, and Federer's final legacy will not be tarnished by a three set loss that still amounts to one of his best performances of the year. Instead, what I will remember is how I felt while the match was taking place. It sounds melodramatic and to be fair it probably is. But there was something special about being so close as these two greats put everything into a battle they both wanted to win. An event is great when you can't find the words to describe it and the most articulate form I could produce occurred when I looked at Drew on the way out and said, "damn that was cool." 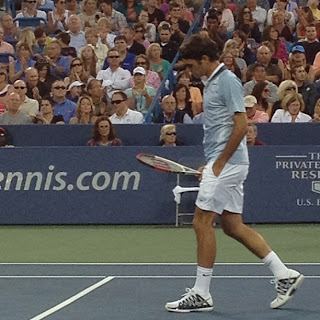 Federer and Nadal have played more important matches in their lives and the tension, while admittedly high for an August Friday before the US Open, is certainly nothing like it would be at a place like Wimbledon or Roland Garros. But I haven't been to those places. What I have seen however is the magic of Federer-Nadal in the most random of all locales, Mason, Ohio, a place best known for Pete Rose, chili and roller coasters. In this least romantic place possible, I felt that distinct tinge of awe you get when you realize you are seeing greatness in person. For the reporter who follows tennis around the world, Friday night may have been no more than a good match at the end of a long week. But for me, it was a special two hours that immediately leaps into my top 5 sports moments of all time. The semifinals and finals are still to come, but for me the Tournament ended the moment Federer declined to challenge Nadal's final shot (it was out) and a great memory was cemented into place.