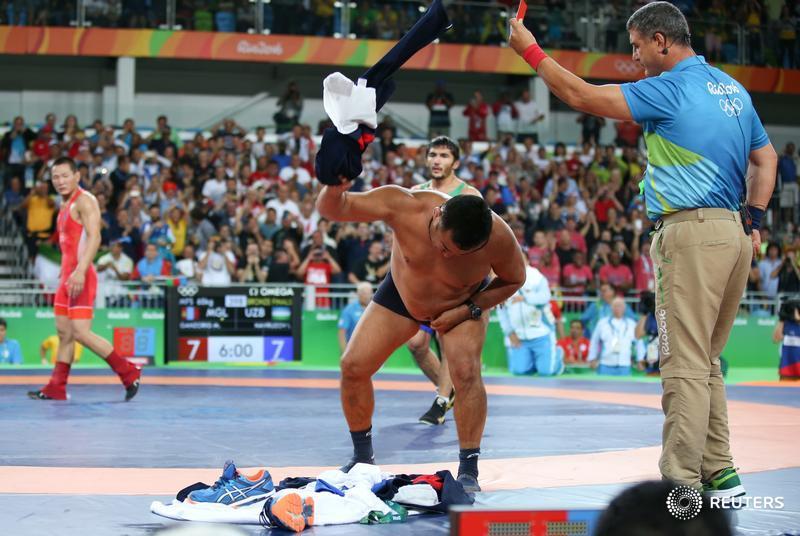 â€@CassLGarrison[/caption] Ever have a day that's so bad you just want to strip down to your skivvies and scream? Well, two Mongolian wrestling coaches did just that yesterday, taking off their clothes in protest when their athlete, Ganzorigiin Mandakhnaran, lost the bronze medal match to Uzbekistan's Ikhtiyor Navruzov. With one second left in the match, it appeared that Mandakhnaran had won, prompting his coaches to run onto the mat to celebrate, only to find out a few seconds later that he had been penalized a point for celebrating too soon. From there, the bronze medal was awarded to Navruzov, and the Mongolians had none of it, throwing out the challenge flag, and when told they couldn't challenge the call, stripping down in protest:

If you feel a case of the Mondays coming on today, I encourage you to try this at work. Let us know how it goes.

UK is letting the media watch part of practice

We are 12 days away from kickoff, and to celebrate, UK is letting media members observe the beginning of practice this morning. Check back in around lunchtime for videos, pictures, and observations, along with Mark Stoops, DJ Eliot, and select defensive players' remarks. Saturday's scrimmage summed up pretty much what we've been hearing throughout camp: the offense looks good, and the defensive front seven looks...well, worrisome. As Freddie Maggard noted yesterday, we all knew the front seven was the team's weak spot, but over the weekend, that vulnerability became concerning. Click here to read more of Freddie's take on it.

Yesterday, the players had a photo shoot with ESPNU 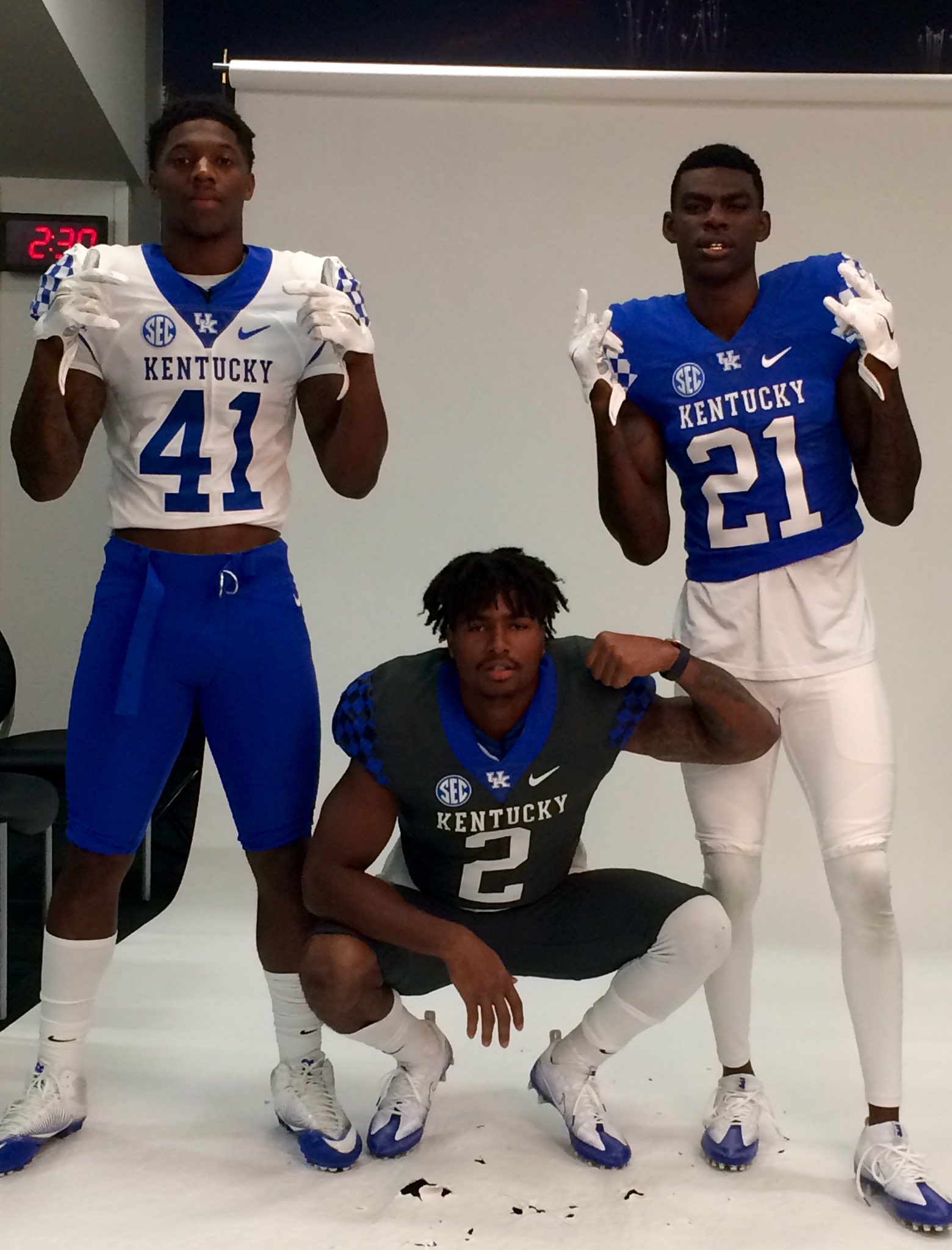 Will Tom Collins and Tanner Fink also got scholarships

Basketball players report back to campus

News has been few and far between when it comes to basketball this summer, but hopefully, that drought is about to come to an end. With classes starting on Wednesday, the basketball team is reporting back to campus after some time off, which means more news should start trickling out from the Joe Craft Center. Prior to the break, here's what we had heard: With the Calipari Fantasy Camp coming up this weekend, I'm hoping that list of insider tidbits grows. 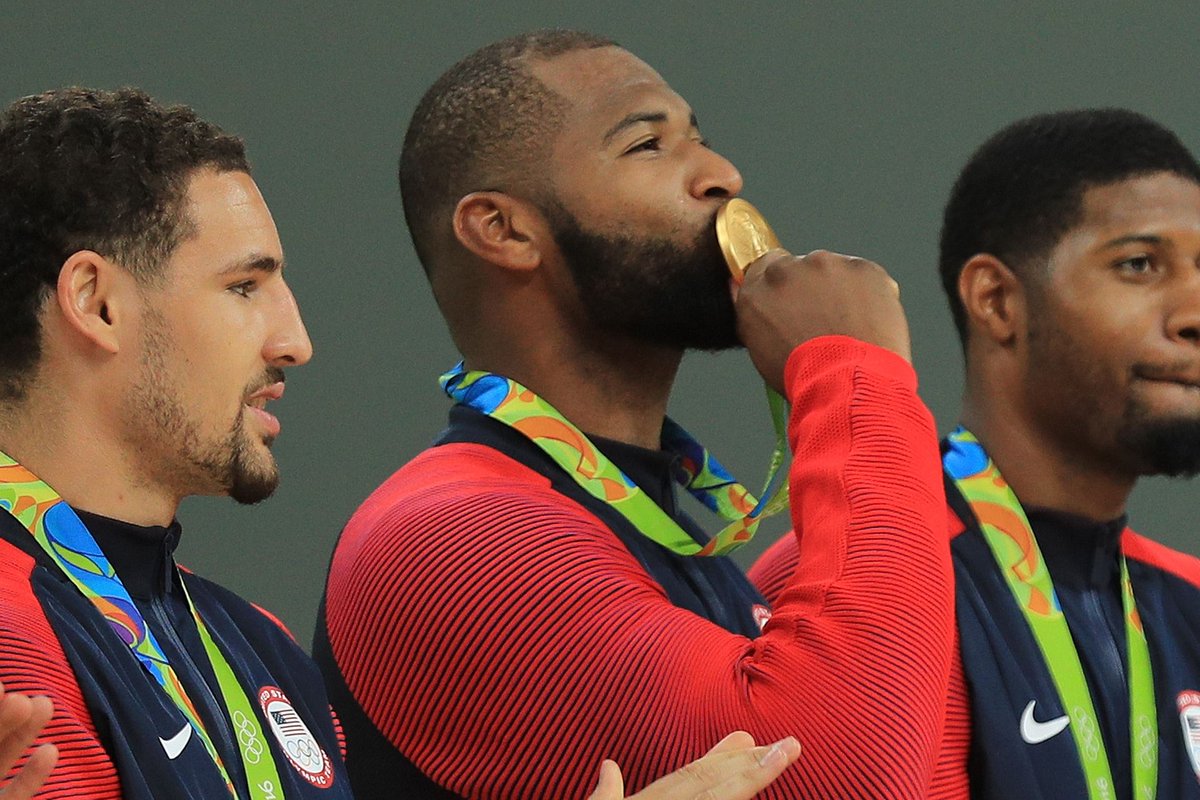 It wasn't exactly surprising, but Team USA beat Serbia 96-66 yesterday afternoon for the gold medal. DeMarcus Cousins chipped in 13 points and a game-high 15 rebounds during his final performance with Team USA, an assertive outing after a few lackluster games in Rio. Afterwards, Boogie told reporters that winning gold was "the best feeling ever." “It’s an incredible feeling,” he said. “It’s all worth it in the end. All the B.S., everything we went through, everybody kind of went through their own type of adversity. We all overcame it. This is the best feeling ever. Honestly, it’s the best feeling ever.” Well done, Boogs.

Did you hear my podcast with Last Chance U's Brittany Wagner?

If not, you've got just enough time to listen to it before Matt, Ryan, and Shannon discuss the show on KSR this morning. Brittany was kind enough to sit down with me for an hour to talk about the show, how she came in to her line of work, and how emotionally exhausting her job can be at times. If you like the show, you'll love this podcast, so please check it out, and send Brittany a thank you note on Twitter @Brittany_MSgirl. She told me she's been overwhelmed by the support from the BBN thus far. To listen, just subscribe to “Kentucky Sports Radio” on iTunes or stream on Podbay.

KSR is in Pikeville