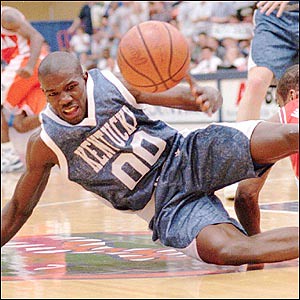 When Calipari mentioned the unveiling of the new uniforms on his call-in show last night (presumably for the Valentine's Weekend Tennessee match up), I got pretty stoked, mostly because: a. I have a surplus of estrogen coursing through my veins which, despite my tomboy-esque tendencies, requires me to get really excited about colors, styles, and other fashion-related crap b. I happen to dislike the current "tight on the top, party on the bottom" look and am hoping we get a little better fit with the next ones. But as with everything that occurs within the scope of the Big Blue Nation, the design and color scheme will inevitably be picked apart, criticized, and blamed for every failure from February 13th on. Let's all pray for a win that day, because the ramifications of losing to UT in said uniforms may move the Lebron-designed threads from Rupp Arena to the sale racks at TJ MAXX and to backyard bonfires across the Bluegrass. Side note: Does anyone else feel like that game is going to be more of a fashion show than an actual basketball game? Add Kentucky's new uniforms to Bruce Pearl's orange suit and ESPN's uncanny dead-horse-beating ability, and you've got a gameday Heidi Klum would be proud of. Setting aside his unfortunate apparel choice at Saturday's game (I found Waldo, and he's a 6'8 prep school student), Lebron is generally a pretty stylish guy. And if the shoes he designed for the team are any indication, I'd guess the uniforms will be right on the trends for today's players. I would never assert that a recruit is going to choose a school for the fashion reasons (in that case I'm not even sure Oregon would have a football team), but having Lebron associated with the school in any way is always going to be a good thing (well, until the sex tapes and hookers start popping up). That being said, just in case Lebron's posse discovered KSR last night and are reading this, three suggestions for the new threads: 1. Black: Although my main man Rich Brooks isn't a fan of the black uniforms, its hard to deny the appeal for today's youth. Since black plays predominantly in the shoes, it's a pretty safe bet that it will show up in the unis as well. Of course the use of black also adds some other positive dynamics: it's slimming on the figure, is neutral and therefore goes well with any tattoos (color or otherwise), and above all, once you go black you really never go back. 2. Respect the Tradition:Look, these uniforms could be fashion masterpieces rivaled only by Tom Ford '96 as the single greatest fashion accomplishment of the last fifty years, but if they even come close to Carolina Blue there will be riots across the state. Same goes for the Kentucky logo. There are certain things that are as Kentucky as Whitaker Bank shots, and these things must remain in tact if Lebron wants even a chance at adoption into the BBN. 3. NO DENIM.-The only thing worse than the denim uniforms is the fact that they were worn by one of the greatest teams to ever play the game and therefore must be viewed way more than if they were worn by another team. Despite any pressure from Harrelson to bring back this unfortunate faux pas of the nineties, here's to hoping we leave the jean shorts in the past. In fact, when Tony Delk finally gets his jersey in the rafters of Rupp, let's not only retire his jersey but the whole line of them. As Tim Gunn would say, "It looks like it's a pterodactyl out of a gay Jurassic Park." "Let's make it work!"