The one team that prefers Okafor has the No. 1 pick
Aritcle written by:

Exactly what we didn't want to happen, happened. Minnesota received the first pick in the draft in tonight's lottery over New York, Philadelphia and Los Angeles. The one team with Jahlil Okafor at No. 1 on its board is the team that will pick at No. 1, and Duke could soon have its fourth first overall selection, the most by any college basketball program. However, though Flip Saunders prefers Jahlil Okafor over Karl-Anthony Towns today, there is still plenty of time for Towns to impress Saunders, while Okafor's weaknesses are further exposed. I fully expect Towns to make a great impression in the weeks to come and overtake Okafor at the top spot. Towns is the right pick, Saunders just doesn't know it yet. But if Minnesota does indeed take Okafor first, Towns will team with Julius Randle in Los Angeles and that's a duo we can all get behind. Not to mention, for Towns' sake, Los Angeles over Minneapolis all day. It's not even close. But, man, it sure would be nice to see another Wildcat walk across the stage first, evening the score with Duke for most No. 1 picks. I guess it's a win-win, although it's still not New York. 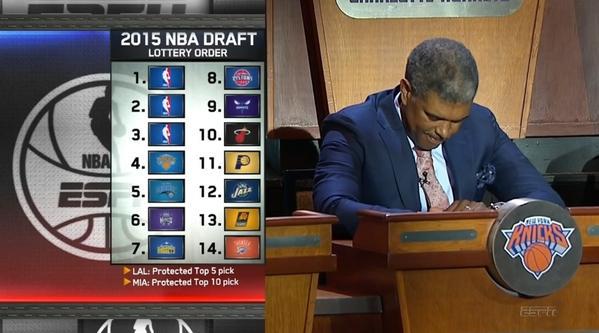