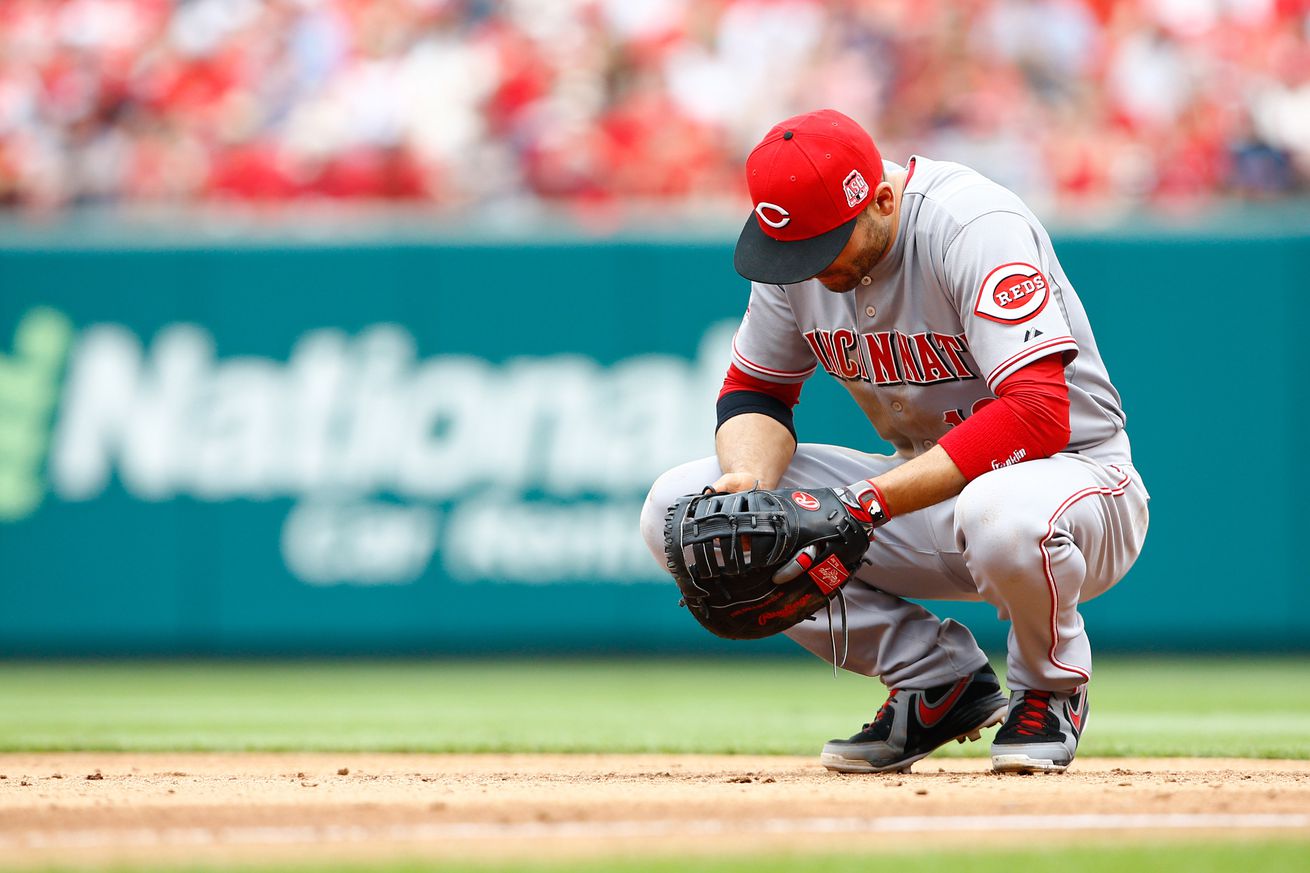 You’re right, this is Kentucky Sports Radio, so why offer a Reds recap? The first football game isn’t for five months, Big Blue Madness is still 151 days away, and you need something to do this summer. Why not give rooting for the Reds a chance? Kentucky has won 82% of their games under Coach Cal. The Reds have won 39% of their games this season. Admit it, you like having a little adversity in your life.

Your Reds recap for this week…

1. Cincinnati finished the week going 2-4 against the Pirates and Phillies. At least they didn’t get swept in either series…

2. Fortunately the rough start to the season hasn’t taken a toll on Brandon Phillips and Joey Votto’s relationship.

3. On the KSR radio show you’ve probably heard Matt complain about the Reds bullpen. This week they only gave up the lead in one game. Still, the Reds have only accumulated three saves on the season. That’s second worst in all of baseball, and only one ahead of the 9-26 Minnesota Twins.

#Reds bullpen has been handed 15 leads from the starters this season. They've surrendered the lead 8 times (53%). MLB average is 23%.

At this point if I had to put a bet on the Reds bullpen closing out a game or Isaiah Briscoe making back-to-back free throws, I’m going Briscoe all day.

4. Reliever Ross Ohlendorf did get the distinction of being the first R eds player ejected from a game this season. On Wednesday night SIX batters were hit in a game between the Reds and Pirates. Several players were hit after both benches were warned, but Ohlendorf was the only pitcher to get tossed. Zach Buchanan spoke with Ohlendorf after the incident, and he claimed that hitting Freese was unintentional.

5. On Saturday night the Reds dropped a game in controversial fashion. Cincinnati was trailing Philadelphia 5-4 in the 9th, and the Reds had the tying run on third. Eugenio Suarez tagged up on a pop out to left, and it led to a collision between Suarez and Phillies catcher Cameron Rupp. Rupp hung on to the ball, Suarez was called out, and the Reds lost.

MLB has taken steps in recent years to try and prevent this type of play from happening. As Mark Sheldon of MLB.com noted, “The Reds challenged, questioning whether Rupp violated Rule 7.13 by blocking the plate.” Catchers aren’t allowed to block the plate prior to catching the ball unless the throw moves them into that position.

6. It’s never fun rooting for a team with a terrible record, but at least they get a high draft pick. Last season the Reds finished 64-98, their worst record since 1982, and landed the #2 pick in the upcoming MLB Draft. C. Trent Rosecrans looked at several mock drafts to see who experts think the Reds might be interested in. Of particular interest to KSR readers is U of L outfielder Corey Ray. He’s been at the top of most draft boards the entire season, and is a legitimate option for Cincinnati with the #2 pick.

7. Earlier this week Reds COO Phil Castellini acknowledge that the Reds likely won’t be competitive again until 2018. That means you’ll be able to enjoy roughly 291 Reds games before you can expect them to push for a playoff spot. While that’s not very encouraging, Red Reporter’s Wick Terrell gives fans reason to appreciate these statements.

“The 2014 season was awful with a turnaround nowhere in sight. What Phil Castellini said on Tuesday is that the 2016 season will be awful with a very, very bright spotlight at the end of the tunnel — just that the tunnel’s a bit longer than you were hoping for. Be mad about it if you want, but I’m focusing on the fact that the people in charge of the team I follow are logical, frank, and realistic.”

Don’t tell that to this guy. He still believes this could be the year. 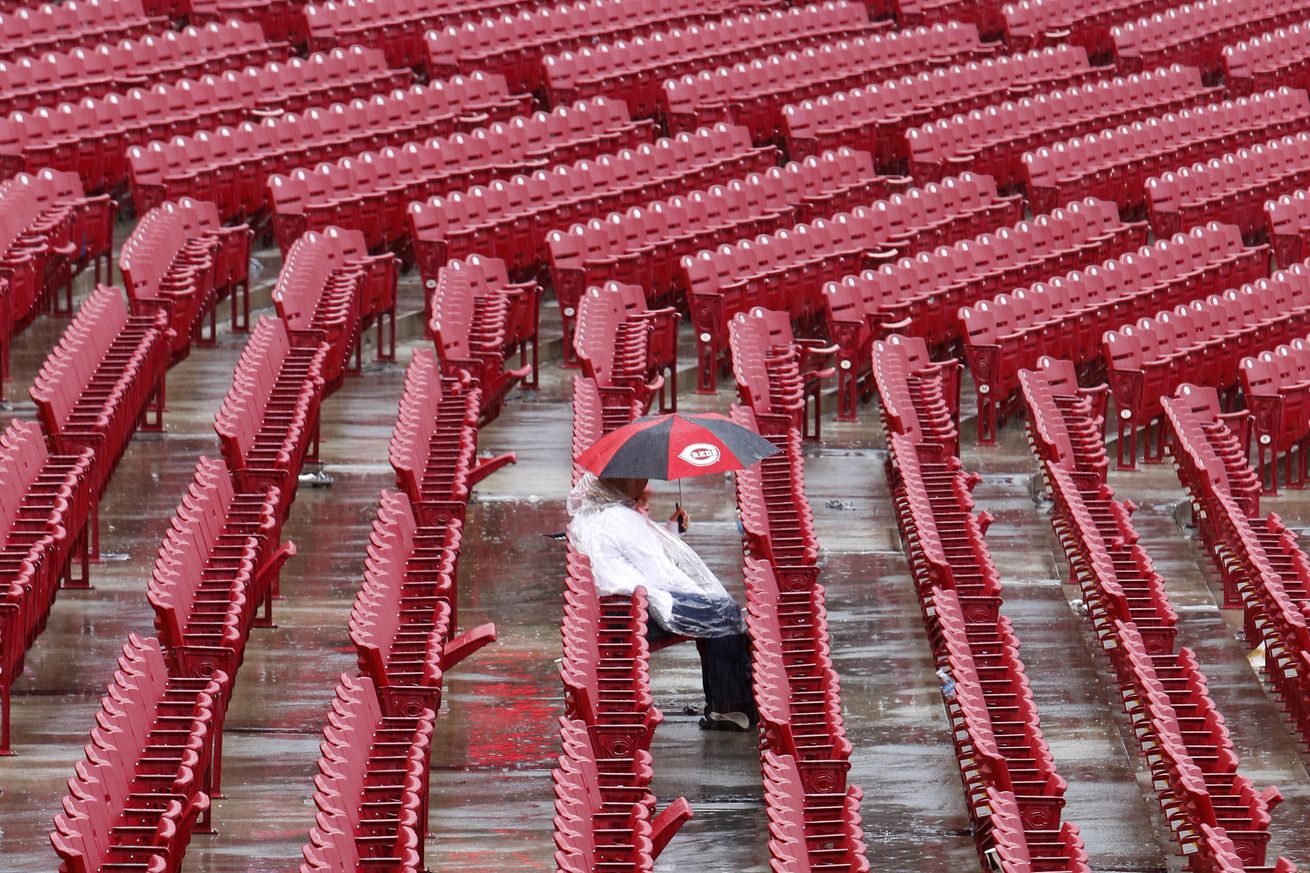 8. However, if you want a reason for optimism this season look no further than pitching prospect Cody Reed. Reed came to Cincinnati from Kansas City last season in the Johnny Cueto trade. The 6’5â€³ lefty is currently 2-1 with a 1.88 ERA and 27 strikeouts while pitching for AAA Louisville. Reed could be in Cincinnati later this season, and could be a huge addition to the pitching staff.

Here’s a little taste of Reed in his start against Toledo this week:

9. Starting catcher Devin Mesoraco underwent season ending shoulder surgery this week. Last season, he was shut down late in June after undergoing hip surgery. It’s a major setback for a player that Cincinnati hoped could be a force in the middle of the lineup.

10. This week I spent some time reading Jeff Passan’s revealing new book, The Arm. In it he talks about baseball’s problem with keeping pitchers healthy and the realities of coming back from Tommy John surgery. One player Passan followed for the book was former Reds reliever Todd Coffey. Coffey pitched in Cincinnati from 2005 through part of 2008. Passan dropped this little nugget about everyone’s favorite reliever:

Why buy The Arm? https://t.co/liqjVB5OtR Because you'll learn about amazing things like the Todd Coffey Sandwich. pic.twitter.com/ukq5l6cRWI

The Reds open up a four game set against the Indians tonight (check out Red Reporter's preview), and then finish off the week at home against the Mariners.

You can follow the Reds all season long, and read more of Eric's writing, at Red Reporter.