If you subscribe to the KSR twitter feed Kysportsradio or follow me on Facebook, you know that in recent weeks the parallels between "The Bachelor and Kentucky basketball have grown. I dont mean that in any sort of metaphysical way or even a Bill Simmons-type comparison between the story arcs. Rather, I have grown to believe that one of the main players on the show has an uncanny resemblance to a former Kentucky basketball great and current member of the UK basketball staff. Simply put, Vienna look like an identical twin of Scott Padgett. At this point on the Bachelor, there are four contestants left. One of them is a bikini model, one of them is named Tenley and is a sweet college admissions counselor at a Quaker school, one of them seems to kiss like a dead fish and then there is Vienna. If you know a girl that watches the show (because apparently the KSR crew seem to be the only men tuning in), my guess is that the women you know hate Vienna. Maybe its because she is bubbly, has low self esteem, seems to be a bit more forward, who knows. But women hate Vienna like Demarcus Cousins hates Australian Centers at private schools in the SEC. However early on, Vienna was a favorite at the KSR Compound. We all agreed that we liked her sass and she seemed to have much more personality than the other girls...which goes a long way with this crew. But then, it ended in an instant. Three weeks ago the Turkey Hunter said, "doesnt she kind of look like Scott Padgett?" From that point on, the crush was gone. I havent seen a lot of reality shows in which the featured women reminded me of former UK players. Brian the Intern claimed that a woman on "For the Love of Ray J" looked like Shagari Alleyne, but I never got that far on that series. So we are left with one of the finalists (and according to some blogs, the leaked winner), being a copy of a beloved UK player with a blonde wig. It is very difficult for me to handle this and it causes much discomfort in the KSR Compound as we watch the episodes. The "Jake" guy who is the Bachelor is already super lame and born to be cast in a PG 13 romantic comedy made by Disney, but now when he kisses Vienna, I feel like he is kissing Padgett and I cant help but turn away and cringe. It is truly ruining the show for me...and I worry that the only news that could be worse is if next season the "Bachelorette" is Rashard Carruth's sister. A reader sends us this meld of Padgett and Vienna...feel free to be haunted: 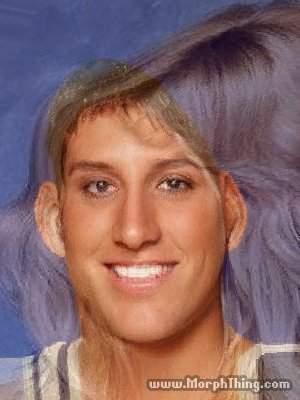