Wrap your head around the fact today is June 21st and we are almost in the month of July. The year 2014 is nearly over but before we can tell the year good bye we've got a whole lot of sports to watch. 2013 has been an awesome year for Kentucky where we battled to the national title game and signed a top recruiting class in football. Now, we get to see some of that pay off in these 2014 games. Here are my picks for the biggest games to come in 2014: 10. Bahamas Tour, August 10-17th The Bahamas tour is going to be awesome. We get to see this team that is absolutely loaded with talent almost 3 months before we normally would and they will take on teams with NBA talent. Since it's only an exhibition the game is low on the list but it's still going to be an epic showcase of this team and we will all get to see what the new guys are bringing to the table. 9. Kentucky @ Florida, September 13th

Why does Kentucky at Florida matter this year more than others? Well, it could be our best chance to win a game in the Swamp in 30 years. The Gators currently hold the longest active win streak in the NCAA with 27 straight but they have never been more vulnerable than they are now. The offensive staff is in turmoil after firing Brent Pease and the resignation of Joker. They went 4-8 last season with losses to Vanderbilt and Georgia Southern at home. Kentucky may not have the pieces ready this season to go down there and win but a 3-0 start to the season would be a major achievement for Coach Stoops. 8. Kentucky Vs UT-Martin, August 30th But you can't get to 3-0 if you don't take care of business during the first football game of the year against UT-Martin. The freshman and sophomores should get plenty of playing time in this game and we will finally see what the offense will look like with a capable QB under center. Will it be Patty Towles or Drew Barker is the biggest question facing this game. All signs are pointing towards the redshirt sophomore being named the week 1 starter. 7. Kentucky Vs Texas, December 5th Rick Barnes would like to remove himself from consideration as coach of this game. Texas will bring a tough team into Lexington which returns all five starters from last season. Unfortunately Kentucky will bring back 3 starters from the national runner-up, a loaded bench, and a stellar class. Myles Turner will be one of the best players to come into Rupp this season but in the long run of the season this game won't mean too much. 6. Kentucky Vs. Mississippi State, October 25th If Kentucky is going to get to a bowl game in year 2 under Stoops then they must win at least two SEC games. Mississippi State is one of the games they can get without having to steal one from one of the big boys like LSU, South Carolina, or Georgia. 5. Kentucky Vs. UNC, TBD 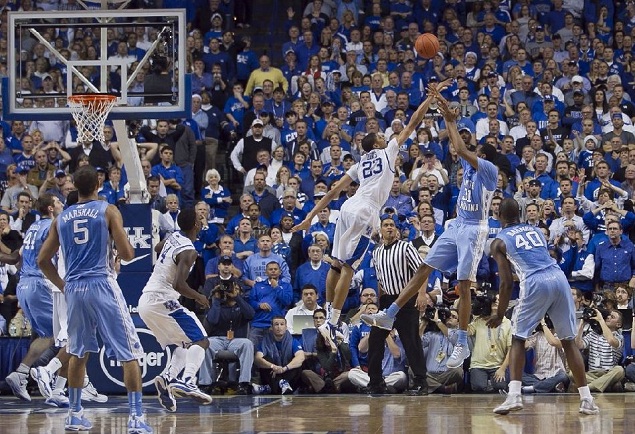 UNC hasn't been to Rupp in two seasons now but the last time they came to town was an all time great. Davis sealed the game with a block as the two best teams in the country met in mid-December. Since 2012 UNC has been a bit down as they have been plagued by injury and players turning pro. This year may be the year that ol' Roy gets things back on track. 4. Kentucky Vs. Vanderbilt, September 27th The last time Vandy came to Lexington for football the result was downright embarrassing. The stands were empty as the 'Dores drummed the Cats by about 1000-0. Now, Vandy is in a new era. No James Franklin. No Jordan Matthews. No Aaron Rodger's little brother. It'll be a different trip this year when they come to Lexington and Kentucky will leave the stadium on top. #Section206 is going to be celebrating. 3. Kentucky Vs. Kansas, Champions Classic, November 18th A potential preview of the 2015 National Championship game? The last time these two teams met in the champions classic it was. Kansas adds Kelly Oubre and Cliff Alexander to a roster that should be preseason top 5. The Jayhawks will give the Cats a challenge at the site of the 2015 final four but UK should come out on top as the more experience team. 2. Kentucky @ Louisville, November 29th The Cats travel to Papa Johns for the last game of the season and both teams could be looking for a victory to be bowl eligible. Bobby P is back to his old ways by taking every outcast from schools all over the nation. Win at all costs: The Louisville Way. With the game so far out it's hard to say what each team will be looking like heading into this game but there is no better way than to close out the season with a rivalry game. 1. Kentucky @ Louisville, Dec 27th

The last time we saw the Louisville Cardinals they were being sent packing by our beloved Wildcats in the Sweet 16. The Cards lost two of their best in Luke Hancock and Russ Smith but with Montrezl and Chris Jones back they should still be formidable. Not enough to take down the Cats, even at home, but the game should still be a good one. Cal is 6 - 1 during his five year tenure at Kentucky so this is becoming less of a rivalry with each passing year plus the Cards will have their eyes on ACC competition looming in late December to provide an easy W for UK.  A 2-1 record in the chicken bucket is coming for Kentucky. What are your picks for the biggest games this season?

Yes, that is a real headline. Father Jim Sichko, a catholic priest in the diocese of Lexington, KY, made a recent trip to Rome where he was able to meet with Pope Francis, delivering many gifts to the head of the Catholic Church. A couple of the...

Don't look now, but the Cincinnati Reds have won seven of their last 10 baseball games. It's hard to get too excited about a team that is still a Major League Baseball worst 11-26, but at least following the team is fun again. For the second...

You can set your watch to it. At least once every ten years a battle between public vs. private schools breaks out across the state of Kentucky. The latest iteration of controversy pits Jefferson County Public Schools (JCPS) superintendent Marty...

Louisville has the UK logo hanging upside down in its stadium

Back in 2019, Scott Satterfield famously complained to Mark Stoops about Kentucky's players doing the Ls Down gesture throughout the Cats' 45-13 romp. Two and a half years later, we're finding out Louisville has its own version: UKs down. The...