The top 15 high school mixtapes of the Calipari era
Article written by: 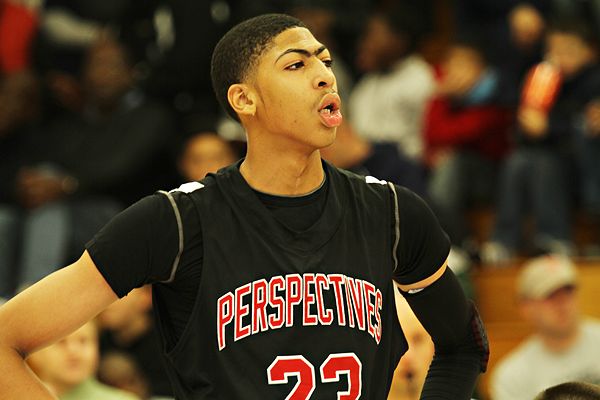 Earlier this week, we told you about John Wall's high school mixtape being named No. 1 of all time by SLAM Online, topping high school sensations like Aquille Carr and Seventh Woods. Today, we're going to rank the best high school highlight tapes of the Calipari era. Let me preface by saying this has nothing to do with actual production at Kentucky or in the NBA, rather the general excitement for each player based on mixtape/film alone. Check out our list:

https://youtu.be/v4CbQGBbUOw The world was introduced to John Wall with this legendary Hoopmixtape. We saw some of the most jaw-dropping passes, dunks, blocks, and ball-handling skills we've ever seen at the high school level. The shifty point guard electrified the BBN, bringing in the Calipari era at UK with a bang.

https://www.youtube.com/watch?v=1OSxB2HZAKE This is where the epic "growth spurt" storyline with Anthony Davis began. The lanky big man from Chicago had the ability to bring the ball up court, defend, shoot from deep, and dunk all over people, and this mixtape showed it all. Little did we know Davis would become one of the best players in the NBA just a few years later.

https://www.youtube.com/watch?v=3Vmt_24T4zE Every time Julius Randle went up for a dunk at Kentucky, we expected the rim to break off. This video was the sole reason.  We were able to see his true athleticism and sheer power, something that translated to the college game with ease. Randle's ability to score on just about anyone in the country was fascinating to watch, and it all started with his dominant high school highlight reel.

https://www.youtube.com/watch?v=kmhMQlM4m3I When Hamidou Diallo was rumored to commit to Kentucky and join the team last Winter, fans expected him to come in immediately and make a major impact. His highlight tapes showed off some of the most epic in-game dunks we have ever seen, with each one better than the one before. His ridiculous athleticism was second to none, and with an elite potential on defense, the hype was real. Diallo sat out for half a year to spend time refining his game, and he's expected to be a star player next season for the Wildcats. Like Malik Monk last year, expect Diallo to live on SportsCenter with high-flying dunks and tremendous scoring ability. Speaking of Monk...

https://www.youtube.com/watch?v=tw8E2N-dBtc Monk brought a unique ability to shoot lights-out from deep, but dunk on someone's face if need-be. His high school tape gave us the best of both worlds. Monk was a threat to score 30+ points on any given night in high school, and that narrative was the same in college. Coming out of Arkansas, many Razorback fans went crazy when their prized recruit left home to join the BBN. So did we.

https://www.youtube.com/watch?v=cZSd-cn2DBA Elite shot-blocking ability, athleticism, dunks, etc., Noel was the best big man in the country and it wasn't close. The energy he brought to the table in this mixtape alone gave Kentucky fans a massive spark going into the 2012-13 season. For a recruiting class that needed a superstar to anchor the unit, Noel gave them just that.

https://www.youtube.com/watch?v=AXe4prvAhyo Drawing comparisons to John Wall, Fox showed off the quickness and elite athleticism we saw at Kentucky in this highlight tape. Everything came to him so easily in high school. (It's weird seeing him in a headband and short hair.)

https://www.youtube.com/watch?v=QiWw8W8oyW4 Karl-Anthony Towns showed off the unique ability to execute traditional post moves and shoot the ball as a big man, on top of his deceiving athleticism. His ability to run the floor with and without the ball in his hands as a 7-foot 17-year old was just ridiculous. After reclassifying to the class of 2014, Towns was actually fairly underrated going into the season. As the year progressed, however, the former Kentucky star developed into the best center in America and the No. 1 overall pick.

https://www.youtube.com/watch?v=SsIGA4oCcNI The anticipation for the Harrison Twins was out of this world, as they were one of the most impressive package deals in recent memory. Considered the No. 1 point guard and shooting guard in the nation, their joint highlight tape provided some of the best examples of their on-court chemistry. Shooting, crossovers, and ball handling, these kids did it all. Oh, and Aaron hit three of the biggest shots in school history. That was awesome, too.

https://www.youtube.com/watch?v=8l7n3jrMqvU A 6'10 shooting guard with ball handling and ridiculous range? I don't believe it. Knox's official mixtape sparked Kevin Durant-like comparisons, and those are going to keep going into the season. This kid is special.

https://www.youtube.com/watch?v=s7JjNCVlrc8 One of the best point guards in UK history started out as a 5'9 kid out of Chicago with a chip on his shoulder looking to cross his opponents up one at a time. His high school highlight tapes proved to tell just part of the future story of his greatness.

https://www.youtube.com/watch?v=zb3Vrkmf0kE Absolutely. Ridiculous. Handles. Briscoe was known as a pit bull from the get-go, going heads up with anyone that dared to guard him in high school. There was no one in the nation with better ball handling abilities, and his scoring at the rim was impressive as well.

https://www.youtube.com/watch?v=Vxf6zuNhZdQ Brandon Knight was the centerpiece of the 2010-11 recruiting class, known as one of the best scorers in the nation. Though he rarely had to show it at UK, his highlight tape showed just how athletic he really was with a few of the crazy dunks and finishes at the basket. He also had a 4.0 GPA out of high school and into college, with that intelligence translating onto the court as a floor general and natural leader of the offense.

https://www.youtube.com/watch?v=oYtgC4_sDRU Teague was considered the top guard in America in 2011, and it's easy to see why in his senior highlight tape. With elite ball handling, athleticism, and court vision, Teague's game translated into the perfect National Championship point guard. It made it even sweeter when he chose Kentucky over Louisville as a senior (wearing a red polo at the announcement, at that.)

https://www.youtube.com/watch?v=IBhAo5FdR9o To have Jamal Murray's tape listed last in the list of top 15 mixtapes just goes to show how unreal Calipari's recruiting ability is. Showing off elite shooting range and athleticism at the rim, Murray shot up the recruiting ranks and hype built on his highlight tapes alone. At Kentucky, he ended up being the perfect compliment to Tyler Ulis, giving the Wildcats one of the most impressive backcourts in school history. The Canadian superstar was one of the best surprises we've received in a while. What does your list look like?