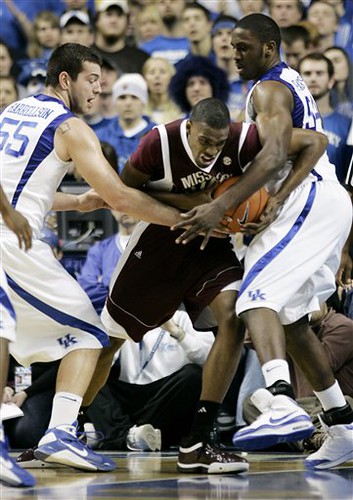 The sports schedule is a little hectic. High school, college, and pro basketball are running strong. NASCAR just fired up the engines for another season. Golf tournaments are building towards the Masters and Tiger's return. Pro Bowling is hitting the home stretch. Mondays are good days to plan out your week and make sure you don’t miss any of the UK-related action.   Monday (2/15/10) -Women's Golf - Qdoba Invitational - All Day: The opening tournament for the Wildcat Lady Linkmasters combines three of Drew Franklin's loves: South Beach, Women, and Qdoba. I can't imagine he didn't try to do everything in his power to attend this event in person. I'm pretty sure Mr. Franklin would have forfeited his substantial KSR salary if Matt Jones would have sprung for a roadtrip and let Drew liveblog this bad boy. As I sit at my computer and watch the snow slowly collect on the ground in Lexington, I can't imagine many better places to be right now than Miami, FL watching golf. The tournament actually started yesterday at Don Shula's Golf Resort and your Wildcats are currently in 13th place. Freshman Betsie Johnson, fellow alum from THE Jessamine County High School, led the Wildcats after posting a 4-over-par 76. Side note for accuracy: The UK schedule calls this the Qdoba Invitational while the articles about it call it the Hurricane Invitational, but I like the idea of free Qdoba much better.   Tuesday (2/16/10) -Men's Basketball - Kentucky at Mississippi State - ESPN - 9:00p: It is tough to get a bead on this Mississippi State squad as they have had an up-and-down season. Their losses have been pretty bad, losing to Rider (currently 14-13) at home being the blackest mark, but there are wins against UCLA and Mississippi that show this Bulldog team isn't terrible. MSU has won eleven straight games at home and I don't envy the Wildcats having to travel to Starkville to play a 9:00pm game. Rick Stansbury always has his teams ready to play the Cats and relishes in the role of spoiler. Stansbury has had an impressive run down in Starkville. The Kentucky native (From? Louisville. /Tom Jackson) and Campbellsville College grad has been down there for 12 years, has won more divisional titles in the last 7 seasons than any coach in the SEC, and made MSU the reigning SEC tournament champions. Hey, is that Varnado kid finally a senior? He is? Good. Gettin' reeeealll tired of that guy. Expect this game to be a battle as UK seeks to end a 3 game losing streak to the Bulldogs.   Thursday (2/18/10) -Women's Basketball - Florida at Kentucky - BBSN - 7:00p: We will get to the UK loss in the Sunday notes because Thursday is tabbed as the annual Pink Zone Promotion game. I couldn't find any information about this year's promotion, but last year the first 1,000 fans received pink t-shirts and fans wearing pink could get general admission tickets for $1 (while supplies lasted). I expect there to be similar give-aways this year as well. Last season, Coach Mitchell said, "Being able to use basketball as a platform to support this great cause and raise awareness for this disease is incredible. We hope everyone comes out Thursday to help us." So, come out for a good cause and help UK Hoops begin another long winning streak.   Friday (2/19/10) -Men's Baseball - Kentucky vs. Virginia Tech - Noon: UK's underrated baseball team received good news last week as players Chris Bisson and Marcus Nidiffer were named second-team All-Southeastern Conference by SEbaseball.com. The Wildcats will also play 7 games on television this year, 6 of which will be from Cliff Hagan Stadium, and one will be on ESPNU (against Tennessee on April 30th). The 12th ranked Coastal Carolina Chanticleers, great name, are hosting the 3 day event and the Wildcats will have to play VT, West Virginia, and the Chanticleers.   Saturday (2/20/10) -Men's Basketball - Kentucky at Vanderbilt - ESPN - 6:00p: If I told you at the beginning of the season that, to this point, UK's most impressive opponent win was over Vanderbilt, would you have believed me? If I told you our best win was over Vanderbilt, wouldn't you assume the season was a total wreck rather than the roundball renaissance we are currently experiencing? The biggest knock I have on this season is how many of our highly regarded opponents have totally tanked after UK took them out to the woodshed. Louisville, of all teams, is the only one really showing life after outlasting Syracuse the other night. Anyway, this has been a tough game as of late as Kevin Stallings has re-energized the 'Dore's fanbase and made Memorial Gymnasium a difficult road arena. Vandy is currently 19-5 although they do have to go to Oxford before they play the Cats. Expect another tight one with gratuitous shots of AJ Ogilvy's haircut courtesy of Fantastic Sam's.   Sunday (2/21/10) -Women's Basketball - South Carolina at Kentucky - FSN - 3:00p: I said last week that Vandy could be a trap game and, well, sometimes it sucks being right. The Lady 'Dores are a good team and there is no shame in that loss on the road. As an aside, how cool was it that the team showed up for the men and College Gameday? Coach Cal recognizing them during his interview was a pretty neat moment. Anyway, this is a revenge game as the UK Hoops team seeks to beat a Gamecock squad that handed them their third loss of the season in Columbia. That loss kicked off the Wildcats 8 game winning streak which finally saw the Cats ranked and put them in great position in the SEC East. Now that the NFL is over, what are you going to do on a Sunday afternoon? Go watch some UK basketball, that is what you are gonna do. Note that this one is also on Fox Sports.