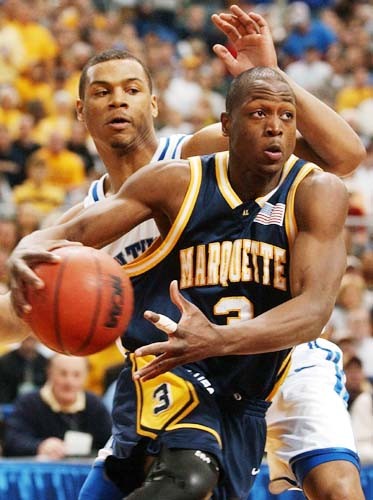 The man above does not play for Cornell. Enough already. BTI has taken the logic game to a whole new level in proving his point that the Wildcats will absolutely destroy Cornell tomorrow night (here and here). I was pretty leery at first, but after Bryan's excellent posts, he, and some other dudes, won me over. This should be a cake walk. As Cats fans all across the world prepare themselves to take on Rorschach's Runts, it might help bolster your confidence to take a look at how Kentucky has performed per round in the NCAA tournament. Let's start with the Rick Pitino era. Why? Because it coincides nicely with the transition away from 4-year-NBA-calibur-upper-classmen to the guard-heavy, 3-point happy game we enjoy today. Here is a table with the Big Blue's ouster over the last 20 years or so (It obviously excludes the years UK missed the tournament (2009, 1991, 1990) as well as the years UK won the whole thing (1998, 1996)): As always a few things stand out: 1) Sweet Fancy Moses, it's a good thing Marquette is out of this tournament. They have knocked Big Blue out of the Big Dance 3 times. Additionally, the Cats don't want any part of the state of Michigan which fielded teams that also eliminated UK 3 times. 2) With the exception of a crazy UAB team, all the schools that have knocked UK out were 'name' schools from large conferences (We all agree that Conference USA wasn't/isn't a large conference, right? It drives fans of teams in that conference absolutely nuts.) 3) BEWARE THE EVEN ROUNDS. UK has been killed in either the second or fourth round a grand total of 10 times. They were only eliminated in the third round twice and neither time was to a double digit seed, much less a mid-major. It is also worth noting that, typically, Cinderella teams don't last long after their initial upset weekend. It is one thing to fly under the radar and upset 1-2 teams in a 3 day period. It is quite another to wait a week and perform the same feat. The coaches and players for the opponent are much more prepared and focused for the underdog's style. Also, the internal pressure mounts on the underdog as more fans, family, and national media members take notice and the turn up the spotlights on the team. Take 2008, for a great example. After (12) Western Kentucky squeaked by (5) Drake in the first round and blew by (13) San Diego in the second, (1) UCLA bested the Hilltoppers when the tournament resumed a week later. Over the past decade, there are other examples of double-digit seeds making it to but not out of the Sweet Sixteen including: (12) Arizona in 2009 (13) Bradley in 2006 (12) Wisconsin-Milwaukee and (10) North Carolina State in 2005 (10) Nevada in 2004 (10) Auburn and (12) Butler in 2003 (11) Southern Illinois in 2002 (12) Gonzaga and (10) Georgetown in 2001 (10) Gonzaga and (10) Seton Hall in 2000. In the past 10 years, the only 12 seed to make it out of the Sweet 16 was the 2002 Missouri team. Missouri is a big school from a big conference that boasted a future NBA guard (Kareem Rush) and was ranked as high as #2 in the polls during the 2001-02 season. These are attributes that (12) Cornell lacks. That said, the Tigers only had to play a #8 seed UCLA to move on as the Bruins had used a double overtime game to upend the #1 seed Cincinnati Bearcats in round two. Cornell doesn't have the luxury of playing an eight seed (Texas) to move on. In other words, starting with the Sweet 16, the NCAA match-ups are big boy games. Kentucky is a big boy. Cornell is not. It is that simple. So, don't sweat this one, Cats fans. It is in the bag.