Welcome to a very special basketball edition of They Are Who We Thought They Were.  Before you get too excited, I should let you know that I just recycled the football preview and made a few adjustments for basketball.  I hope this isn't a problem.  If it is, I'm sure you won't hesitate to leave a hateful comment.  Hey, speaking of hateful, I hate Louisville.  They are who we thought they were... 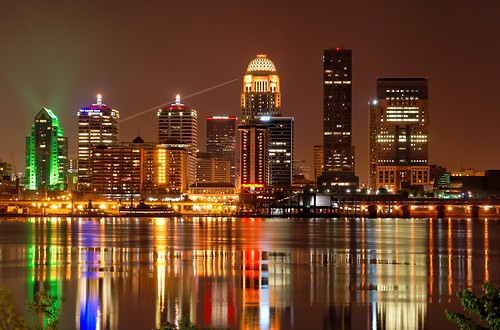 "The Gateway To New Albany, Indiana"

Contrary to popular belief, the city of Louisville is situated in north-central Kentucky on the Kentucky-Indiana border. Its geographic location is commonly mistaken for the Andes region in South America, due to its flooding, birth control methods, and overwhelming population of cougars. According to the census of 2000, there are 693,604 people populating the city. The settlement that became known as the city of Louisville was founded in 1778 by George Rogers Clark and named after King Louis XVI of France. I'm not quite sure why the city bares King Louis' name, but I think it has something to do with the urge to behead everyone that lives there.

-- Fourth Street Live - Bars, live music, fine dining, and the second largest collection of venereal diseases outside of the CDC

-- Louisville Slugger Museum - Provides guests with the opportunity to experiment with wood of various shapes, ages, sizes, and colors

U of L Cheerleader Scouting Report

For the past two weeks, I've scoured the internet looking for the Louisville cheerleading squad. UofLSports.com has absolutely nothing. After numerous failed attempts to find the squad via internet, I took it upon myself to hit the road and find them my damn self. It just so happened they were competing in Tampa last weekend. So, I called up Beisner, bought a video camera, and headed south. This is what we found:

KSR Exclusive Video (Commentary by Thomas Beisner) Head Coach, Rick Pitino Despite the offseason scandal, Pitino continues to bring in big time recruits.  Players say they come to play for Pitino at Louisville to prepare for the NBA.  He teaches them lessons in getting drunk, spitting game, adultery, and giving women cash for abortions.  If those aren't NBA-ready life lessons, I don't know what is.  Players also love his quick-to-the-hole, no protection offense and his pro-choice defensive strategy. Tomorrow, Pitino will enter a very hostile Rupp Arena and look to pull off what would easily be his biggest win at Louisville.  His team is very outmatched, and, he likes Coach Cal about as much as he likes latex.  Let's send the old man back to "The Ville" with a beatdown. Projected Starters

G - #10 Edgar Sosa - 6'2" - Senior I'm sure you remember Edgar Sosa from last year's game.  Yeah, that was garbage.  This season, Sosa is averaging 13 points and 4 assists per game against B league intramural teams.  Tomorrow, he is just hoping to get Wall's autograph in warmups.  Also, according to Louisville's website, Sosa's favorite TV show is John and Kate Plus 8 and he wants Mario Lopez to play him in a movie.  I couldn't make that up.

G - #34 Jerry Smith - 6'2" - Senior Jerry Smith is having a mediocre season, averaging almost 9 points per game, 2 assists, and 1 resisted arrest.  He is two steals away from becoming Louisville's all-time leader in steals by players that look like they're 40.

F - #12 Reginald Delk - 6'5" - Senior Reginald "I'll Never Be My Uncle" Delk is a senior at Louisville after spending two years playing for Stansbury at Mississippi State.  He has a twin brother, Richard, who plays at Troy University and was born on the same day.

F - #21 Jared Swopshire - 6'8" - Sophomore Swopshire will start in place of sophomore forward Terrence Jennings.  The Cards really need him to step up and fill Jennings shoes, which have been known to flee from police with Jerry Smith.  According to his bio, his goal is to finish school with a 4.0 and a national championship.  Good luck with that.

C - #15 Samardo Samuels - 6'9" - Sophomore Somardo Samuels is soft and I'll say it to his face.  Like the always well-dressed, swagger-filled Chip Cosby said on the Hooters podcast, Samuels can't handle big time competition.  Last season, he scored a combined 0 points in the Michigan State and UConn games. Final Word / Prediction A flu-ridden Peyton Siva, in Jordan-like fashion, will check in to the game and put his team on his back.  And when I say Jordan-like fashion, I actually mean he won't score any points and Wall will teabag him on a fastbreak.  But, he will carry his team to Hamburg for Maggie Moo's and Princess and the Frog after the loss. Kentucky wins this one in a blowout.  I plan on dropping more coin on this game than Muha... nevermind.  John Wall will break his own assist record while scoring 25 points and making Edgar Sosa cry.  Hood, Jorts, and Krebs will combine for 15.  Write it down. Kentucky 83, Louisville 62