With the conclusion of the football season comes the end of TAWWTTW for another year.  I hope these previews were informative and helpful in your game preparation this season.  Come back next year as we do it all again in pursuit of a 14-0 record and a BCS Championship.  Now without further ado, ladies and gentlemen of Big Blue Nation, meet the Pittsburgh Panthers - they are who we thought they were.  (And they're going down.) Go Cats. The University of Pittsburgh The University of Pittsburgh, commonly known as Pitt, was founded by Hugh Henry Brackenridge in 1787. The school began as a preparatory school in a log cabin in the Western Pennsylvania frontier.  Today, the university is known for the development of the polio vaccine, the word's largest organ transplant center, and Levance Fields' 10+ years as the point guard of the Pitt basketball team. Pittsburgh, Pennsylvania I spent a weekend in Pittsburgh for a bachelor party a few months ago and I can easily sum up the city in just a few words:  River, trash, beer, hills, beer, where's the skyline?, casino, obnoxious Steelers fan, incline, tunnel, what's that smell?, beer, narrow roads, Iron City, Primanti Brothers, hill, and beer.  Done. Notable Alumni/Staff

Gene Kelly - #15 on AFI's Greatest Male Stars of All-Time list.  Kelly was a dancer, actor, singer, film director and producer, and choreographer.  He is most known today for his performance in Singin' in the Rain. He is also recognized as a key player in the influx of Benzoylmethyl Ecgonine (commonly known today as "cocaine") into Los Angeles from Mexico in the 1940s.  Ok, I made that up.

Mark May - Former All-American offensive lineman for the Pitt Panthers.  Now, like Gene Kelly, he sings in the rain while serving as a human spit cup for Lou Holtz's game analysis on ESPN.

Fred Rogers - Mr. Rogers always wanted a neighbor just like you. It was a beautiful day in his neighborhood, and a neighborly day in his beautyhood.  He always wanted to live by you.  Would you?  Would you be his?  - Sorry, Fred.  You gave me the make believe creeps.  I wouldn't get within half a mile of your house no matter what shoes you had on.

Dan Marino - Lost 22 lbs. and is in the best shape of his life since turning to Nutrisystem's simple meal plan.  Order now and get one week of food FREE!  That's 28 meals!  POT ROAST!

David Dalessandro - Screenwriter of one of the most influential films of the 21st century, Snakes on a Plane 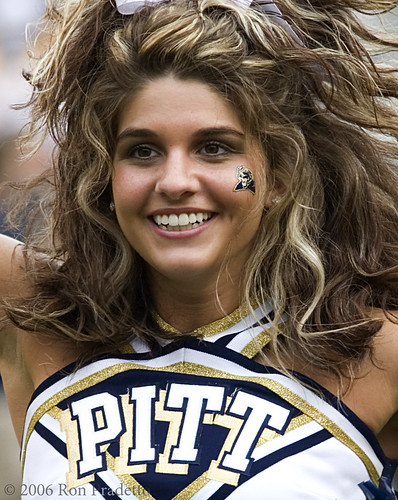 #28  Dion Lewis, RB (197 rushes, 956 yds, 12 TDs) Dion Lewis' numbers have dropped since finishing third in the country in rushing yards in 2009.  Coaches believe it's because Dion missed a key preseason team meeting when players were told not to smile in team photos.

#82  Jon Baldwin, WR (52 rec., 810 yds, 5 TDs) Jon Baldwin has already announced he'll enter the NFL Draft and he bashed his QB, coach, and team while doing so.  "Heck yeah, I'm leaving... It can only get worse... It felt like they were purposely trying to disrupt my draft stock." Plus he kinda looks like Darnell Dodson to me.  Anyone else?  No?