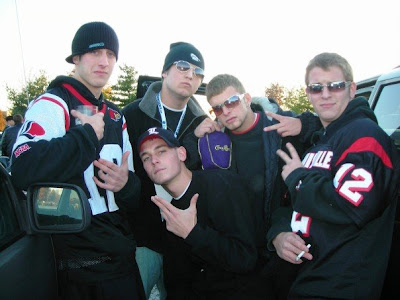 As you read below from Beisner, the news of the day is the Rick Pitino courtship of the New Jersey Nets' job and the subsequent denial by all parties of that courtship. Start with this point. No matter what ANYONE says to you, the reality is that Pitino wanted the Nets job badly and went after it hard. A reporter who is very close to Pitino told me about this a month or so ago and multiple NBA guys have now said the same thing. Rick tried hard to get the Sacramento job and couldnt get it, and then has tried hard to get the Nets job and it looks as if that wont happen either. But when he gets out and says he has "no interest", he is lying through his teeth...something we should be used to up until this point. Many UK fans are singing the praises now of comments like the blast of UL by Doug Gottlieb today on Sportscenter. He said that Rick should get out of Louisville if he can because the Cats have "taken the Commonwealth by storm and UL is now a bit-player." While the first part is certainly true, the second is a bit incorrect. UL has the same fan support now that it had last year. The only difference is that the UK fans are energized. But as outsiders from this state never get (including Rick, who thought he could change the hearts and minds of the Cat fans), allegiance in this state is permanent, not revolving. Cats' fans are energized like never before and Cards' fans are down...but their sheer numbers are essentially the same. With all of that said, I am firmly of the belief that its time for Louisville to turn the page on Rick Pitino. I have made the case often on the radio that as good a career as Rick has had, his time in Louisville has been slightly disappointing. One Final Four, three Elite Eights, two (and depending on how the year ends, potentially three) NITs, and only one conference title is not a bad record...but it isnt what UL fans thought they were getting. If Card fans were honest, had you asked them when Pitino was hired if that record would be the result, they would have said no. They thought they were going to enter the UNC-Duke-UK-Kansas-UCLA tier with the Pitino hire, and it hasnt happened. Instead, they have been a good, but not great program...better than the Louisville of the 90s, but not in the ballpark of the Louisville of the 80s. And worse, things arent necessarily certain to get better. Pitino's 2010 class is bad (although it got better with the commitment of Justin Coleman), and his 2011 class has the potential to be great, but relies heavily on the decision of Marquis Teague, who will be deciding between the Cats and Cards. Even if he pulls off that class, Rick doesnt have the recruiting mojo he once did. Ask yourself this question...is there anyone on the Cards' roster who could start at Kentucky? Probably not. I would take Samuels on my team anyday (even with his difficulties at times), but in general the team's talent is a notch-below where it needs to be. While it is true that the Cards had two NBA draft picks last year, it is difficult to see any pro careers for the players on the roster now, with the exception of Samardo. All of that is why I think it is time for a change in direction at the Cards' helm. Now I am not saying UL should fire Rick...they shouldnt. His success is such that he deserves to leave on his own terms. But a change in leadership would get the program in the right direction. Think about it like this...the Cards are opening a new arena next year with a team that (if Samuels leaves) could be the worst UL team since his first season. He has that messy Sypher trial coming and Calipari has clearly overshadowed Rick for the forseeable future. If Louisville were to get a fortunate change (by Rick heading to the NBA), they could go get a coach who is young enough to go for broke and needs a change in scenery himself...like maybe Billy Donovan. That move would allow everyone a fresh start and potentially point the Cards in a new direction. Many will disagree with those thoughts, but if you are a UL fan and reading this (and I know you are), ask yourself this honestly: At this stage in their careers, do you REALLY believe that Rick can catch up to Calipari again? If you are honest with yourself, the answer has to be no...and if that is the case, then it may be time to cast your lot with someone who can at least try.