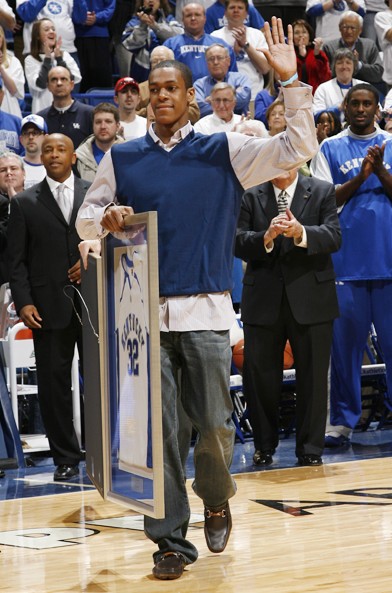 Interesting stuff from CNNSI: --- While reporting a story in this week's Sports Illustrated on Celtics guard Rajon Rondo, I spoke with his college coach, Tubby Smith. While they often weren't on the same page at Kentucky, Smith said longstanding rumors of personality conflicts with Rondo have been overblown. "I had no problem with Rajon,'' said Smith, now the coach at Minnesota. "He kept himself eligible academically, and he did everything we asked him to do. "When Danny [Ainge, Celtics president] came to watch him play a couple of times when we were at Kentucky, I remember telling him, 'You're not going to find a better athlete.' He's as good athletically as there is in the NBA. He has great hands and anticipation, and he's as competitive as anybody. He is really driven and determined to win.'' Smith said Rondo's drive was at the heart of their differences. "Sometimes that can be a sticking point for coaches because you want things done in a certain way,'' he said. "That's one of the things I talked to Doc [Rivers, Celtics coach] about, the confidence [Rondo] has in his ability and if you can live with that and get past that.'' Smith counseled Rondo to turn pro because he believed the NBA style would liberate him. "In college you have a little more control,'' Smith said of his half-court system at Kentucky, "and in the pros you have more freedom on that court. In the open court you can't double-team the guy. No. 1, he's going to beat his man -- that's a given because he can get to the rim against anybody. Now that he's surrounded by great players, his game is elevated.'' But Rondo's need to play in the open floor wasn't the only issue at Kentucky. "I used to say, 'Rajon, you're so good that you've got to make everybody better. This guy can't handle that pass because he's not as talented as you are,' " Smith said. "That's why he's fortunate he went to a team that has great players around him. I'm not so sure, and I hate to say this, but I'm not so sure it would have gone so well if he would have gone to a lesser team. He and I used to talk all the time about this, and I would tell him, 'I know you can do that, but it's going to take all five of us to beat this team.' Sometimes he thought he could do it.'' Smith was speaking Sunday morning before a 72-45 rout of Northwestern. "Coaches have differences with players all the time. Just now we've lost four out of five and I'm concerned about my point guard,'' Smith said of Minnesota sophomore Al Nolen. "He reminds me a lot of Rajon. He's got that stubbornness. It must be me. I must attract them.''