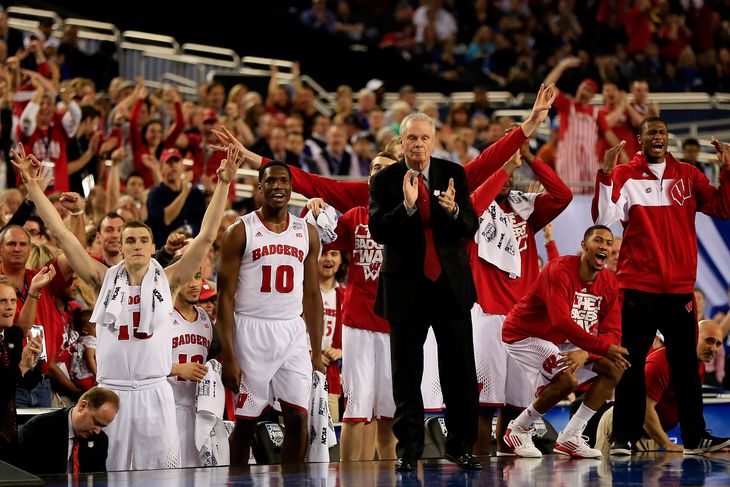 Halfway through Final Final week, it's clear that the Wisconsin Badgers are the media darlings. Each team has a storyline--Kentucky: undefeated; Duke: Coach K is a legend; Michigan State: Izzo has never been more Izzo--but Frank Kaminsky and his ragtag group of happy go lucky kids have become the latest team to, as the national media says, "play basketball the way it's meant to be played." They have an efficient offense! A goofy white guy in the middle who's actually amazing! WHOA they play video games! (Does the national media care that UK plays the same video game? Of course not.) Bo Ryan called himself the Pinball Wizard! Swoon! So, in what will likely be an ill-fated attempt to balance the coverage, here are two things the national media WON'T tell you about Wisconsin:

They have one of the lowest graduation rates in the country

From Derrick Z. Jackson's article for the Boston Globe:

If the 68 teams were seeded by graduation rates, the Badgers would be a bottom seed. They have the lowest Graduation Success Rate for black men of zero and the third-lowest overall at 40 percent. They were one of 16 teams that should be disqualified for historically graduating less than 50 percent of either black or white players or having an overall rate under 50 percent.

Before the haters that are lurking call me a hypocrite for bringing up graduation rates, Jackson also notes that 89% of UK's student athletes graduate. But we're the ones ruining college basketball?

Bo Ryan tried to block one of his players from transferring

This story's a little old, but worth revisiting. Remember when Jarrod Uthoff tried to transfer from Wisconsin a few years back? Probably not, but it became news when Bo Ryan blocked Uthoff from transferring to at least 25 schools in what he says was an attempt to get him to fully explain why he wanted to leave Wisconsin. Uthoff ultimately appealed the restrictions by meeting with Wisconsin's AD Barry Alvarez and the school lifted the restrictions for all the schools outside the Big 10, but it was a bizarre move by Ryan. Uthoff now plays at Iowa anyways. Just a few things to keep in mind as the national media polishes Wisconsin's halo this week.