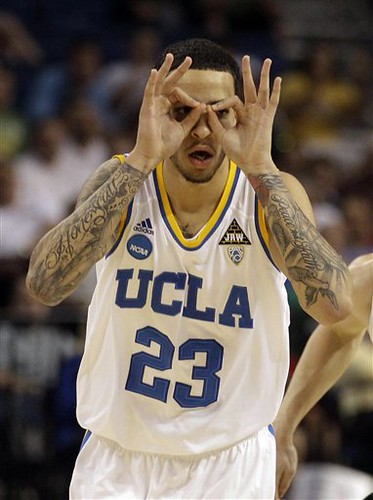 At one time, it was the most dominating program at any level, in any sport. UCLA won 88 consecutive regular season games under John Wooden from 1971-1974 and compiled a 38-game NCAA tournament winning streak with seven consecutive titles from 1967-73. What Wooden did in the 60s and 70s will never be repeated, but what the UCLA program has done as a whole can be matched and surpassed. The University of California, Los Angeles has won a record 11 NCAA basketball tournament titles since the program's establishment in 1920. The Bruins have played in a record 12 NCAA tournament title games with 17 Final Four appearances. UCLA is one of only four schools to have an undefeated season, joining the 1956 San Francisco Dons, the 1957 North Carolina Tar Heels and the 1976 Indiana Hoosiers in accomplishing such an improbable goal. The titles and Final Four wins and appearances are NCAA records. They say an undefeated season can't be done again. And for that, UCLA is the subject of this Thursday's News and Views.

What you just read about UCLA is exactly what John Calipari wants at Kentucky -- and more. UK is currently three national titles behind UCLA's 11 and Cal has his mind set on breaking the record. "We're chasing UCLA," he said after Kentucky won banner No. 8. If he can lure in Shabazz Muhammad, Nerlens Noel, Anthony Bennett, or just two out of three in the next month, Kentucky will be the early favorite to win the title again next season. It'll be the same forecast for the 2014 Final Four, considering UK is lined up to haul in its best recruiting class yet for the 2013-2014 season. All that aside, there are many out there who expect Calipari to be the head coach of the New York Knicks next season, and those believers have a voice on Twitter and on the Internet, unfortunately. On Wednesday, a reporter for the New York Daily News tweeted, "a lot of people believe John Calipari to the Knicks is already being set into motion." The reporter did not, however, say who this lot of people are or why they believe the move is in motion. It's just a rumor. It's expected and will continue to be expected after every successful season at Kentucky. It's part of being John Calipari. He failed in the NBA before, and now that he's won at the college level, his ego could eventually drive him back to the league to prove he can do it. I wouldn't blame him for leaving either, especially if it was for New York. But even with a possible job opening in The Big Apple, Calipari has made it clear he is happy right here in Kentucky. I'm sure many have been quick to tell you he said the same thing at Memphis right before he left, but Memphis isn't Kentucky. He has "the best job in basketball" and he reminded Big Blue Nation of that again on Wednesday afternoon. "I'm not going anywhere," he said. UK athletic director Mitch Barnhart believes Calipari is sticking around the bluegrass too. On Wednesday, he tweeted, "I had a great conversation with Cal and I'm looking forward to chasing UCLA's record." And it's not crazy to think Calipari can get there.

Like I mentioned somewhere above, Cal needs to add Shabazz Muhammad, Nerlens Noel, and/or Anthony Bennett to the 2012 class, and the two prime targets, Muhammad and Noel, will both announce their decisions on April 11. Shabazz is down to UCLA and Kentucky, and Rivals.com's Jerry Meyer said on Wednesday that he's hearing Muhammad will end up a Bruin. While Meyer could end up being correct, remember he is just hearing it from "a couple of reliable sources" at this point. Believe him if you'd like, but until I get a who or why, I'm still hoping for Muhammad in Kentucky blue. I think this one will ultimately come down to who makes the decision. I believe Shabazz wants to go to UK but he's being pressured by his father and others around him to stay out west. Let's hope he does what is best for his basketball future.

If you ask a staff member from UK or UCLA about where they think Shabazz will go, you'll probably end up with completely different answers. Jeff Goodman said both staffs are telling people "it's done for them." I guess someone has to be wrong.

It won't be the end of the world if Shabazz picks the Bruins, as long as UK can get a commitment from Nerlens Noel. We've felt very strongly about the flattop feller becoming a Cat since he reclassified to 2012, until Wednesday when Evan Daniels tweeted that no less than three industry sources told him they believe Noel will end up at Georgetown. However, Evan told us he doesn't necessarily agree with his industry sources. He said he is still not sold that Nerlens doesn't end up at Kentucky. Evan is one of the best and most-informed in the business and he said he would be shocked if Kentucky doesn't get two out of the big three left on the board.

For more on Nerlens Noel, go read his latest blog entry over at ESPN.com. The nation's top prospect wrote about talking to hundreds of UK fans in New Orleans, including one guy who offered up his wife. Nerlens also wants you to ignore people like the ones talking to Evan Daniels. "Rumors are rumors, what can you do, but just know that I'm far from a decision no matter what you hear."

Another 2012 recruit is still floating around out there uncommitted and he has Kentucky on his list of four schools. Amile Jefferson, who we at one time believed was down to Duke and NC State, said he received a phone call from Kenny Payne and the UK assistant told him they expect to lose six players to the NBA. It's unclear if that'll affect his decision but we at least know UK is still in contact with the forward from Philadelphia.

Enough with the recruiting talk; let's get Hollywood. Anthony Davis will be a guest on Jimmy Kimmel Live! Thursday night at 12:00 AM ET. He'll be on with the smokin' hot Lena Headey from 300 and Game of Thrones. (I wonder if she's seen Davis in Moncell Allen's This Is UK video.) Needtobreathe will be providing Kimmel's music.

If history repeats itself, the Wildcats will visit President Obama at The White House sometime in May. The past three NCAA champions -- '09 UNC, '10 Duke, and '11 UConn -- all made their celebratory trip to Washington, DC in the middle of the month. We're making sure our schedule is completely free so we don't miss out on the visit.

Some of the 2012-2013 preseason college basketball polls were released on Wednesday, which is completely ridiculous, and everyone seems very high on Kentucky, Indiana, and Louisville at this premature stage in the game. CBSSports.com, CNN, NBC, and Yahoo all ranked the three schools in some various order at the top of the rankings, while Andy Katz put Indiana at No. 1, Louisville second, and Kentucky fourth behind Kansas. Assuming the big names at IU and UofL stay in school, it could be a very fun non-conference schedule for the Cats next season. It's great to see the local rivals back to prominence.

The Craft Center's trophy case has some new hardware:

(via @CoachCalDotCom) I'll leave you with that. Go Cats.