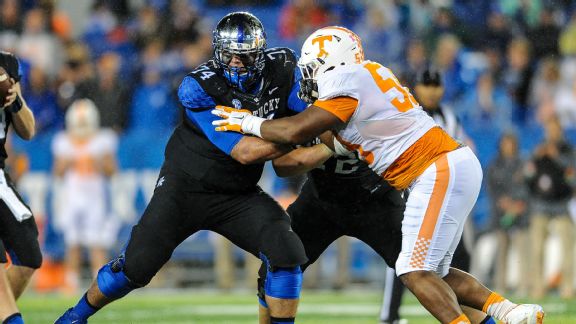 Brian Lynn | Icon Sportswire[/caption] Cole Mosier will miss the 2017 UK football season after the left tackle suffered a torn ACL in his right knee during the Cats' first preseason scrimmage.  The injury will end his senior season and his career; UK announced in a press release he is not eligible for a sixth season. “We’re extremely disappointed about Cole’s injury,” Coach Mark Stoops said. “He has been with us all five seasons we’ve been at Kentucky. He helped set the example of hard work that is the theme of this program, as he came in as a walk-on and earned a scholarship. We know Cole will continue to support his teammates this season and we wish him the best in his recovery and in the future.” A former walk-on from Walton, Ky., Mosier earned a scholarship after becoming the No. 1 left tackle as a redshirt freshman.  Last season he started in ten of UK's 13 games, sidelined for three after a minor injury at Florida. “Tearing my ACL was a big blow and it’s unfortunate because I wanted to finish my career here at UK with my teammates,” Mosier said in a statement. “However, I’m going to have surgery on Thursday and I plan to rehab my knee in order to participate in UK’s Pro Day in March. I want to thank Coach Stoops and Coach Schlarman for everything they’ve done for me. I also want to thank the Big Blue Nation for their support. Coming here as a walk-on and then earning a scholarship was a dream come true. I’m going to continue being around the team to cheer them on and help the team as much as I can.” In Mosier's absence Stephen Johnson will rely on sophomore Landon Young to protect his blind side.  The former five-star recruit from Lexington played regularly in John Schlarman's 2016 offensive line rotation and registered 27 knock-down blocks as a true freshman. There have been a few players "banged up" here and there, but it's the first major injury of preseason camp.  Mosier's injury marks the second consecutive year an injury in the Cats' first preseason scrimmage has caused a player to miss the entire season.  In 2016 safety Darius West's season ended early with a similar knee injury.