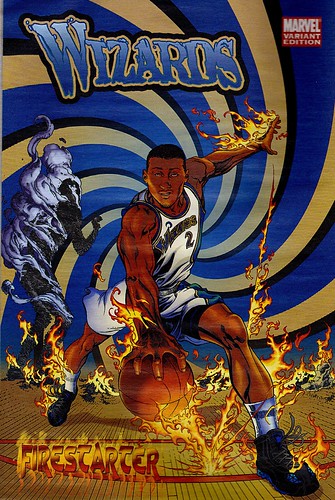 As we continue our trek through ESPN's glorious renditions of NBA teams in comic book form, we have the #1 overall draft pick and starter of dance movements: John Wall. Wall as The Human Torch? Oh. I like that. I like that a lot. I'm good with that being his nickname and joining Jorts, Boogie, and Black Kool-Aid to round out the nicknames for last year's nickname core four (Yeah, I just stole that from the Yankees. Wanna fight about it?). Since Wall gets his own cover and everything (and really he should. . . he is the only real thing the Wizards have going for them short of changing their name back to the Bullets. . .which they should do, like, yesterday) I'll quote what the Mag says about him:

No. 1 overall pick John Wall as Marvel's Human torch? It's easy to see why: The rookie point guard's highlight package already includes 360 degree layups that reduce defenders to toast. The real question is whether Wall will build or burn bridges with Gilbert Arenas. if No. 9 can successfully move to the 2-guard, we could be looking at a repeat of the Wizard's 2004-05 season, when Larry Hughes stepped aside for a young Arenas to take the point full-time. That result? The highest scoring backcourt duo in the league. Hot stuff, indeed.

Excellent. My only problem with this is that the face looks nothing like John Wall. It looks way more like Jamaal Magloire's head. . .maybe even Randolph Morris.