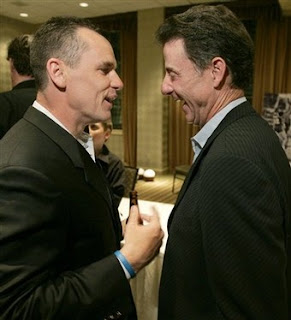 If you know the rest of the Cats schedule then you know that there is one home game left. That game will be Senior Night against Billy Donovan and his Florida Gators but it'll have other significance on the recruiting trail. The final home game means the final shot at getting recruits into Rupp for a live game atmosphere before spring decisions. You don't have to tell that to our staff though, they aren't wasting that moment on just anyone. Here's an update on our two planned Florida visitors:

Marquis Teague When Marquis wasn't able to make it to the Tennessee game, speculation was that he must be planning on making the trip for the Florida game. With only two home games left at that time and South Carolina coming in on a weekday night, a noon game on Sunday against Florida seemed like the logical choice. Evan Daniels made a recent trip to Indianapolis to see the talented players that the city had to offer and of course made a stop by to see Mr. Teague. Teague confirmed his plans to go to the Florida game and also said that he'd like to visit Cincinnati and Indiana one more time before deciding. Pitino has been all over Teague lately, visiting him on multiple occasions to watch him play. It looks as if he is trying to make a strong late push to add Teague to an already healthy 2011 class for UL and Donovan (that's another story). While it's hard not to say that UL is the favorite with the family history, previous naming of UL as a favorite and the class he would be joining, it's equally as hard to imagine any top point guard not wanting to follow in the footsteps of Wall, Rose, Evans, etc. All I can say is that this race is going to be a tough one to call and it looks like it's headed for a photo finish. Cincinnati, Purdue and Indiana will most likely end up being the "also ran" teams.

Josh Selby Kansas fans got their Rock Chalkin' feathers in bunch this week when the rumor mill churned out that Selby and his mother might be upset with Kansas' fans and their reaction to the adversity that has faced Kansas guard Tyshawn Taylor recently. This prompted KU's ESPN affiliate, TheShiver.com, to give Ms. Witherspoon a call and get her feelings on the subject. According to Witherspoon, she had a joking encounter with a Kansas fan where she said that she hoped "fans would be as harsh as they've been on Tyshawn," if Selby were to stumble while trying to fill Sherron Collins' shoes. She reassured Kansas fans that this sort of thing wouldn't bother them or have an effect on their decision and that if she didn't think Josh could handle it, schools like Kansas wouldn't be on their list. Looks like that rumor is squashed. Selby will be traveling to UConn this weekend to watch their home game against Louisville. Kansas and Arizona have already been visited, leaving his trip to Lexington on the 7th as his final official visit to the four schools on his list. However, if Selby's Lake Clifton team were to win their playoff matchups on Tuesday and Thursday, the visit could come in conflict with his playing schedule.  If that were to happen, I would expect a visit to still occur, it just won't be during a home game, something that UK would much rather see happen.