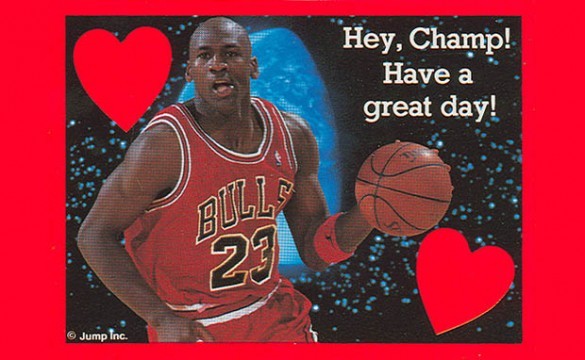 I miss these cards. If you're here reading this post tonight, cheers to you, my friend.  It looks like we're in the same boat. While 95% of America is cuddled up in bed with that special someone -- after a long day and night of blowing money on dinner, chocolates, gifts, edible skivvies, and overpriced flowers, followed by two to three minutes of making sweet, passionate, uncoordinated love under a mutual agreement to not turn the lights on -- you and I are rebels of love, the nonconformists of the Feast of Saint Valentine. F*** Hallmark, man. We don't need a designated day to be romantic, especially not one in the middle of basketball season. We're modern day revolutionists who chose to sit at the computer, alone, in the dark, in our footed-jammies, on Valentine's Day night. We're going against the grain! Trend setters! And by that, I mean, I'm single so I volunteered to do tonight's News and Views. What a guy. Thanks for logging on and keeping me company.  I love you. Let's talk sports...

Nerlens Noel is still gone and will continue to be gone for the remainder of the season. There's nothing you or I can do about it, although I'm willing to keep trying if you have any suggestions. We have to move on, as hard as it is, and get behind the team as they play for an NCAA tournament bid. The first test in the A.N. (After Nerlens) season is this Saturday in the unfriendly confines of Thompson-Boling Arena in Knoxville. The Vols are looking to snap a six-game losing streak to Kentucky and get back to .500 in the Southeastern Conference this season. For Kentucky, whatever happens in the game will likely be a sign of what's to come in the final six games of the regular season. Will the Wildcats rally and battle for their fallen teammate? Or will the loss be too much for the Cats to withstand? We're about to learn a lot about Calipari's young team and how they deal with adversity. Everyone will need to step up.

Okay, just one Nerlens Noel note.  We can't resist.  Noels' brother, Rodman Noel, told CBSSports.com that he'd be surprised if Nerlens returned to Kentucky for his sophomore year. "Right now people still say he'll be a top-five pick. It would only be smart to take it while you can," he said. The older Noel, a starting linebacker at NC State, told Jeff Goodman that Nerlens is devastated by the injury because he is unable to finish out the season or compete in the NCAA tournament.

The McDonald's All-American game rosters were announced Thursday and, as expected, five soon-to-be Wildcats were invited to participate. Dakari Johnson is the odd Cat out on the East roster; he'll be going up against Andrew Harrison, Aaron Harrison, Marcus Lee and James Young on the West squad. The game will take place April 3 in Chicago.

Notably absent from the McDonald's All-American rosters is UK target Julius Randle. Randle, the top-ranked power forward in the class, did not get an invite because he's missed the majority of his senior season with a broken foot. However, there's still a chance for Randle to be a late addition to the All-American game if he can get back to the court soon.  His mother told the USA Today that her son will return to action this Friday for his team's senior game. If he's able to play at a high level, expect the McDonald's people -- Ray Kroc, or whoever calls the shots -- to give him a late invite.

Andrew Wiggins made a guest appearance on ESPNU during the McDonald's All-American television special to discuss his recruitment. He said that he'll make his decision in April, and then named Kentucky first when listing the schools he is considering. Wiggins said he's looking for a good coach, good facilities and good fan support.

From the Herald-Leader, Mark Story thinks UK should look to the Billy Gillispie era for inspiration. I stopped reading after the title. I can't imagine anything below the picture making sense.

And in case you missed it earlier, Rex Chapman wrote a phenomenal piece on Nerlens Noel for NCAA.com. It's so good, it almost made us forgive him for writing for NCAA.com.  What's up with that, Rex?

Check out the championship rings the 1996 UK team will receive during their reunion at Rupp Arena on February 27, the night of the Mississippi State game.

The team didn't receive fancy rings from UK after winning the title in 1996, they only got the crappy ones from the NCAA.  Now, they'll have some bling they'll be proud to show off, like the 1998 and 2012 championship teams.

I think we've found the biggest John Wall hater in North America and it's not Colin Cowherd, surprisingly. David Falk, the former agent of one Michael Jordan, said John Wall will never be good as Kyrie Irving was in his first week in the NBA. Falk told The Washington Post, "You guys are in dreamland. Because this team stinks so bad you guys want John Wall to be someone he will never be. Before Wall becomes Nene, I would trade him and get rid of him.” Wow. Falk said Wall has all the size and athleticism but he only knows one speed. "He doesn't have a feel for the game," he added. While I agree that Wall could stand to have a better feel for the game, to say he'll never be as good as Kyrie was in his first week is a little harsh.

Terrence Jones got called up from the D-League, so, there's that. Good for him.

In football news, the Kentucky Senate Appropriation Committee passed House Bill 7, which includes the projects put forth by the University of Kentucky, including renovations to Commonwealth Stadium, the Nutter Training Facility and the construction of that new science building you've all been hoping for. The committee did make one change to the bill, adding wording to state that UK is not allowed to raise tuition to fund the projects for Commonwealth Stadium. The bill will now go in front of the full Senate for approval. #StoopsEffect

We'll close with two pieces of football recruiting news: NATE WILLIS WILL BE A CAT: Forget everything you heard over the last 24 hours.

NEBRASKA IS SALTY: Running back Braylon Heard, a former star at Cardinal Mooney in Ohio, will transfer out of Nebraska and he is lovin' him some Kentucky.  The only problem is Nebraska granted him his release under one condition: he cannot transfer to Kentucky. Apparently, the folks in Lincoln are still upset over Marcus McWilson picking the Cats. However, clauses like these rarely last and Heard should be able to work his way around it.  If he does, which everyone expects, Stoops and the staff won't put too much effort in signing a running back to the 2014 class because Heard will be the guy. He was the No. 5 back in the country when he committed to the Huskers in 2010 and he'll have two years of eligibility wherever he goes.   That'll do it for tonight, folks.  Tune in to Kentucky Sports Radio radio in the morning when Ryan and I fill in for Matt Jones, with special guest Mary Jo Perino.