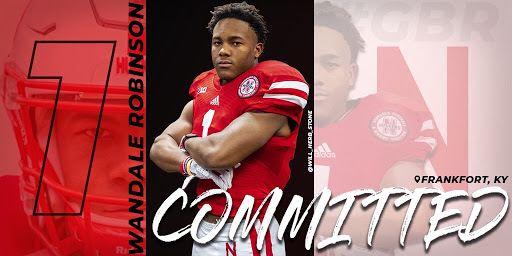 It's official. Four-star Frankfort native has flipped his commitment from Kentucky to Nebraska. It's a big blow for UK.  Robinson's tweet below details the flip. He notes pressures of pleasing everyone and the pressure of staying home for why he initially committed to Kentucky. I'm not sure when Robinson will do another interview, but he did tell Dave Lackford of Rivals that "The whole time I was committed to Kentucky I still had Nebraska in the back of my mind." The timing of all this is bizarre. Robinson committed to Kentucky a month ago, wins Mr. Football and just two weeks before signing day he switches his commitments. It was about 24 hours ago he was talking about getting other in-state players to join him at UK. That's recruiting, folks. But this sting shouldn't last too long. The Cats should get some great news on the recruiting trail tomorrow and UK's staff did just about everything they could to land Robinson, even visiting several times after he was "100 percent" committed to the Cats. Best of luck to Robinson moving forward. https://twitter.com/robinson__era/status/1070399891996839936