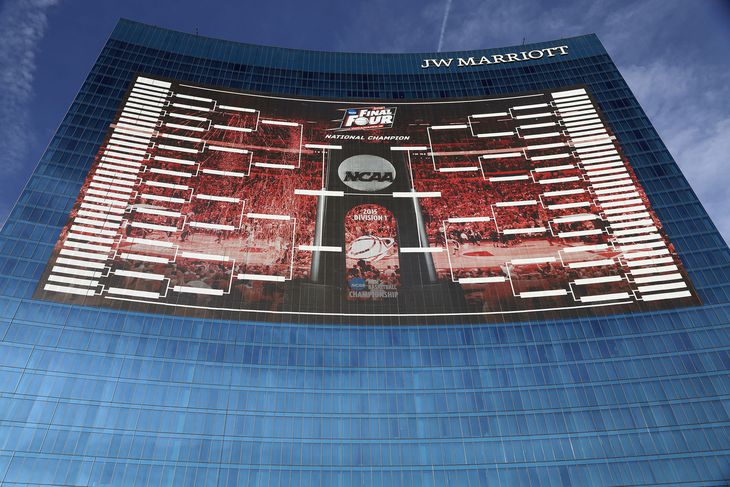 USA Today[/caption] The Final Four is here, Cats fans! After months and months, wins and wins, and zero losses, the final stage of college basketball is upon us. Now there's only one thing left to do: bring home the title. But before we get to Monday night's title game, there's a ton of stuff going on in Indianapolis in the days before Kentucky's seminfinal game with Wisconsin. I will make the drive up to Indy early, early, early tomorrow morning and KSR will have coverage from the scene as soon as I touch down. (And check in to the hotel. And eat. And pick up my media credential. And sit by someone I will probably hate in the media room.) So check back with us often as we bring you everything from the Final Four these next few days. It's going to fun a weekend and hopefully an even better Monday and Tuesday as the Cats attempt to complete what so many have said can't be done. Let's. Go.   The team is in Indianapolis.

As always, #BBN welcomes us with a grand entrance. pic.twitter.com/pyfcaHbrR4

The Cats arrived in Naptown around 7:00 pm Wednesday to begin the biggest five-day stretch of their lives. Tomorrow they will talk to the media in Lucas Oil Stadium, beginning with John Calipari and Bo Ryan at the podium at noon, followed by one player from each of the four teams. They will return to Lucas Oil on Friday for more media and the open practice, scheduled for 3:00 pm. Saturday, it's on. Oh look, Kentucky is on the cover of Sports Illustrated again.

Do it again next week? Jason Whitlock blasted Karl Towns on PTI. Whitlock, filling in for Michael Wilbon, said he expects Karl Towns to have a tough time with Wisconsin's "grown men" inside. Whitlock said Towns will "get handled" by Frank Kaminsky & Co., although Kentucky may still win the game without a big contribution from arguably its biggest offensive contributor. He also called Towns "a kid" and "overvalued" and then spoiled The Wire ending with no warning. Isaiah Briscoe wants Jaylen Brown and Malik Newman at UK. Sitting courtside with Jay Williams at the McDonald's All-American game, Isaiah Briscoe told ESPN viewers he would like to play with Jaylen Brown the most out of the eight uncommitted players in Chicago this week. Briscoe said he is also recruiting Malik Newman to Kentucky with Brown. "I just need somebody on the wing that can catch and shoot," he told Williams. Briscoe, the lone Kentucky representative at the game, said John Calipari's proven record with guards is what drew him to Kentucky. "It's the highest stage of college basketball and that's something I couldn't say no to," he added. Williams then asked if the pressure of playing in Lexington scares Briscoe. "Pressure is not in my vocabulary." Other notes from the McDonald's All-American game: -- The East (Briscoe, Jaylen Brown, Cheick Diallo, Thomas Bryant, Ben Simmons, Antonio Blakeney, Luke Kennard, Diamond Stone) won, 111-91. -- Cheick Diallo took MVP honors with 18 points and 10 rebounds. -- Briscoe had 11 points and five rebounds. -- Malik Newman doesn't have a lot to say interviews. We did learn his father's ties to Mississippi State will have no impact on his own decision, though. -- Jaylen Brown has phenomenal hair. It would look great with a Kentucky uniform next season. -- Brown also picked Kentucky to win the Final Four. -- UK target Stephen Zimmerman dunked on UK target Thomas Bryant. -- Jay Williams said, "Tom Crean has done nothing but win at Indiana." He did. He said that. That is something that left his mouth and went on national television. -- Don't forget: Caleb Swanigan will decide at the Nike Hoop Summit next week and Kentucky is in the mix. John Wall is a wizard. Wall went between the legs then no-look pass to Otto Porter before Nerlens Noel ruined the highlight play, blocking Porter's layup attempt at the rim. And I just realized Wall is, in fact, a Wizard. My headline was unintentional and I'm leaving it. Boogie messed around and got a triple-double. Cousins had 24 points, 21 rebounds, 10 assists and a career-high six blocks in the loss at Houston. There's talk Sacramento may shut him down for the season. STOP RUINING COLLEGE BASKETBALL, WILLIE!

Willie had a Monday lunch date with one of his biggest fans, a four-year-old with cerebral palsy who hopes to one day be his wife. A nurse posted a video of her confessing her crush on Willie on Facebook, he saw it and arranged a lunch date in Wildcat Lodge. These guys really are the best, on and off the court. For KSR radio show fans in Indianapolis... Friday's show will be in studio, then Ryan and I will host the pregame show at Tin Roof Indianapolis at 6:00 Saturday. The plan is to do Monday's show at Tin Roof, assuming Kentucky beats Wisconsin. I hope this helps. Check out the new KSR Pop Up Shop in Lexington!

We are set up in the Crossroads Plaza at 3270 Nicholasville Road in Lexington. Stop by to get your official KSR merchandise, just in time for the Final Four. See you in Indianapolis!