What's next for Brandon Knight?
Aritcle written by: 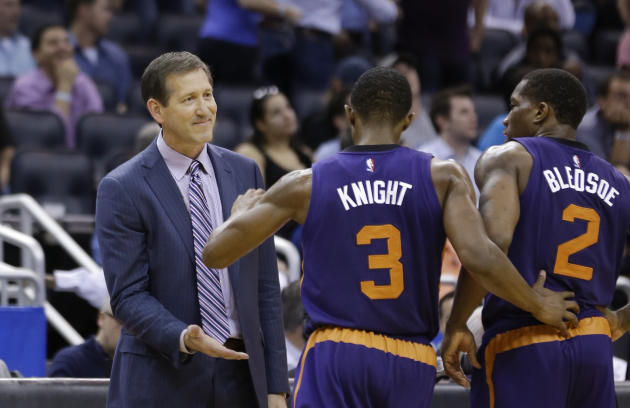 Via YIMG.com[/caption] Brandon Knight's fourth year in the league saw the young point guard break out into the player many expected him to be when he left Kentucky. He was a major player on a Milwuakee Bucks team that won 41 games and made the playoffs, a 273% increase in wins from prior year. The Suns sacrificed a pretty hefty bounty when they made a move just before the trade deadline to acquire BK and this summer he will head into restricted free agency. So, what's next for Brandon Knight?

Every year that Knight has been in the league he as improved in just about every aspect of his game. After being dealt to Phoenix mid-season BK played in just 11 games alongside former Cat Eric Bledsoe but at times though the two looked like a dynamic duo. What made them so goo? Let BK tell you himself as he said in an interview with SiriusXM NBA Radio.

"I enjoy playing with Eric, because he's a great talent and he's not a selfish player, He's very, very unselfish. He's just trying to make the right play, trying to win. So, as far as playing with Eric goes, I think it's a great thing because you have two players that can attack at any time, instead of having one team focusing on just one of us. Being able to have two guys that can really break down a defense at any time, I think, will make it not only easy for myself, but easy for him as well.

In just a few weeks the NBA free agency period will open and potential suitors will begin to battle for the services of Knight. Knight is a restricted free agent so the Suns will have the option to match any offer that Brandon gets from another team. Knight will also face the challenge of how that deal is structured. In 2016 the NBA's new TV deal will take effect and result in a drastic increase in the max contract of players. So while signing a long term deal would give Knight some ease for his future as an NBA player he may also be leaving himself out of millions of dollars.   Either way it is going to be an interesting summer for Kentucky's former point guard.