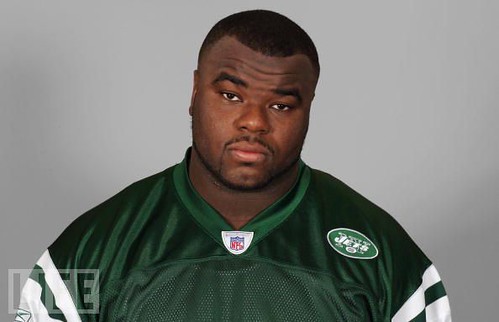 UK's own little Biz Markie Quick, which SEC team has only had one first round pick in the NFL draft over the past decade? If you said Vanderbilt, you lose! Vandy has had 2. The unfortunate answer is your University of Kentucky Wildcats (Weirdest rank? Tennessee tied at #1 with 10 first rounders. There is a reason Fulmer no longer coaches there). For those that think the pigskin is just a neat diversion until basketball season begins, UK's last first round pick was a doozy. Dewayne Robertson was selected #4 in 2003 draft by the New York Jets (who actually traded up to snag the SEC's second-team DT). The outstanding defensive lineman left UK before his senior year after racking up 114 tackles, one fumble recovery, three forced fumbles, and 10.5 sacks. Why bring this up now? Well, with the NFL draft going down in PRIME TIME (For all those that read that with Chris Berman's voice in your head, I am truly sorry) tomorrow night, it seems our decade's only first rounder has been cropping up in the news lately. When the college football season ended this year, it was widely believed that Ndamukong Suh would be the first pick of the draft. Since then, due in part to the assuaged concerns over Sam Bradford's shoulder and the rising stock of DT Gerald McCoy, Suh has fallen from #1 overall pick status. HOWEVUH, Suh and McCoy are expected to make history by being the first pair of DT's to be taken in the top 3 picks of the draft. This strikes many reporters and NFL prognosticators as an odd development because, while the position is important in the NFL, it isn't one that has historically been filled successfully via the draft. Enter DeWayne. Sites everywhere are proclaiming the Memphis native's status as a bust. He is being linked to names like Big Daddy Dan Wilkinson and (gulp) Steve Emtman. Robertson is being used as the poster child for all that can go wrong when a team selects a DT in the top 5. Wildcat football fans everywhere realize this is unfortunate (although DAP should be given to Mens Journal for using the hilarious phrase 'useless elephantine nose tackles'). While at UK, Robertson was caged fury and an absolute joy to watch. His big play pre snap routine, where he entered his three point stance and kicked the ground with one foot like a starving bull, was simply awesome. Few Wildcats could explode off the line, bowl over a lineman, and absolutely destroy a quarterback like our man Dewayne. As a player, I can think of few individuals that embody the spirit and the love for the Big Blue more than Robertson. I can safely say that the current NFL free agent is one of my favorite UK football players of all time and his contributions warrant far better than. . Wait. What? You want me to check out this video where Robertson gets his cars, I believe the term is 'pimped' (I'd embed it, but we have had so many videos on the site today that one more might make Matt Jones' head explode. Robertson enters around 3:14 to go). He. . .he. . gets them all done in Tennessee orange? And says he has to represent and 'do it for (his) hood'? . . . Aw. Screw that guy. He was a bust and a total disappointment. I never liked him anyway.