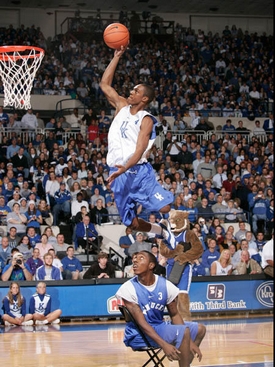 If you followed Matt’s updates from media day today, you know a couple things.  1.)  Big time media members make Matt mad.  2.)  Laodu is back, and he brings love for Chuck Hayes from China.  And 3.) Coach Cal said as far as Big Blue Madness visitors?  “That’s a secret.”

So let the speculation begin.

-Matt later went on to say that all four commits for the 2012 Cats will be there, so that gives us Gilchrist, Teague, Davis, and Wiltjer.

-We can likely rule out Tony Woods, Pete Thamel, and Samantha Ryan (I mean let’s face it, she probably couldn’t get a ride.)

-Will there be an appearance from our favorite Hip-Pop artist?  Drake is currently touring, so it’s probably not too likely… but today he is in Chicago, and his next stop is Tuesday in Detroit, so it’s a possibility.

-Think LeBron will be bringing his talents to Lexington?  Again, I would be surprised if his highness came back for a Kentucky practice, especially given the relative proximity to Cleveland.  But he doesn’t have another pre-season game until Monday, so it’s impossible to rule out.  Until you remember he would be missing a Friday night in Miami to travel to Kentucky.

-So what about last years Draft Cats?  I think that’s who we would all like to see, but for that reason, I think they may sit this one out.  Knowing Cal, he’s smart enough to keep the focus of the first Kentucky 2010-11 experience on the future and not the past.  If you don’t want to invite the continuous comparison between this freshmen class and last years, you don’t bring Wall and Boogie back to steal the spotlight.  Plus, Patterson is in China.  I think they absolutely make a trip back this year, but I doubt it’s this Friday.

-Last year we saw Tayshaun coach against Drake, but Prince has a pre-season game Friday night, so that’s another marked off the list.  Rondo plays Friday night too.

That really doesn’t leave us with too many that would qualify as ‘secrets,’ unless Cal is just teasing the fans and there aren’t any visitors other than recruits.  But I’ve got the feeling that he has a couple guests up his sleeve, I just can’t figure out who.