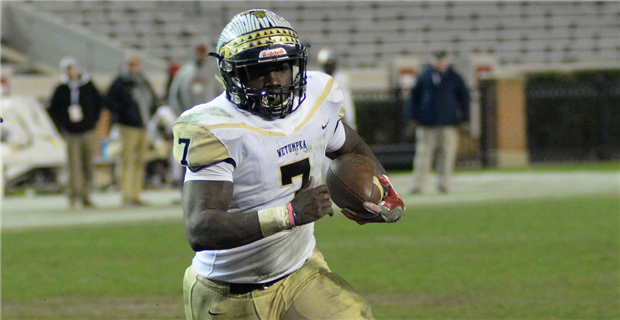 247[/caption] The Kentucky football team could land its most important remaining recruit in the 2018 class before the weekend concludes. Originally scheduled to visit Lexington last weekend, Kavosiey Smoke postponed his official visit to UK until this weekend. Kentucky must do everything they can to secure a commitment from the powerful Wetumpka, Alabama running back while he is on campus. In search for one final running back in the 2018 class, Smoke can make one cut and power through opponents with a running style that mirrors Benny Snell's.  As Freddie Maggard noted, Kentucky has a couple other recruits that are ranked higher, but none are more important.  Eddie Gran's offense has succeeded on the shoulders of UK's running backs.  To continue that success, they need Smoke's broad shoulders in the backfield. Can Kentucky make it happen?  Mark Stoops and Vince Marrow were able to convince Nick Lewis and LiAllen Dailey to commit after last week's official visits.  It might be more difficult to persuade Smoke to spurn North Carolina, but it could happen before the weekend concludes.  Stay tuned. [mobile_ad]