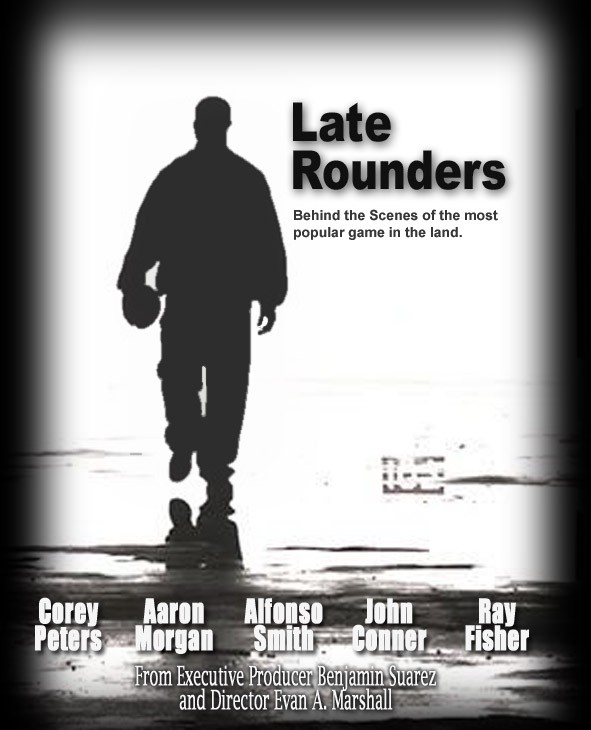 Even during the biggest part of the basketball season, Kentucky football is finding a way to garner a little media attention.  This weekend on Selection Sunday, a film will debut at the DC Independent Film Festival that follows three former wildcats as they make their way into the NFL.  The film ‘Late Rounders’ follows John Conner, Corey Peters and Alfonso Smith from the end of the regular season, through the combine, and into draft day.  All three players played in the 2010 NFL season, with Conner making the biggest splash of the three.  While I haven’t seen much of the film outside of what’s available on their website, it actually looks pretty solid.

Here are the bios provided on the films site, which will give you a feel for how melodramatic the whole thing seems to be:

Corey Peters: At more than 300 pounds, sporting long dread locks, Corey’s looks do not match his demeanor. Introspective and beautifully unimpressed with the world he’s hoping to dive into, Corey prepares for the NFL Combine in hopes of adding needed publicity to his name. But he’s not the only one struggling for respect. He has taken a chance on a fledgling talent agency, HOF Player Representative. Critics say Corey needs to be with a bigger, more experienced agency. In fact, the only soul who believes in agents Greg “Tripp” Linton and Michael Puterbaugh, is Corey himself.

Alfonso Smith: Alfonso “Fonzo” Smith is blessed with an amazing combination of speed, power and size. Standing 6’1” and over 210 pounds, “Fonzo” could blow through the 40-yard dash with sub 4.4 speed. Clearly, those are numbers any NFL scout would salivate over. Fonzo chose the wrong year to get injured and the wrong draft class to be a running back. A stress fracture ruins his senior season. And when the draft starts, something is wrong. No one is drafting running backs. Will that combination render Fonzo unemployed at day’s end, or will some team take a flier on this athletic superstar? As all these elements swirl around Alfonso, they all seem trivial when faced with a personal battle that would crush anyone with less intestinal fortitude.

John Conner: With a nickname like “The Terminator” and the look of a professional full back, John Conner is a force to be reckoned with. Hard-hitting on the gridiron but unassuming and polite off the field, there is no doubt that John will make it in the pros. But the bigger question on draft day is who will take him and when. When those questions are answered, even his agents are left speechless.

Dramatic emphasis aside, watching the trailer actually gives a pretty good vibe about the film.  It seems like a project worth keeping tabs on, and who knows, maybe we will have a whole lot of ‘Late Rounders’ dvd’s to give out on the site one day soon.