COLUMBUS — The track career of Anavia Battle started in the streets of Inkster, Michigan.

Holding races in the roads of her hometown, her passion to run began while chasing her friends to the nearest stop sign or a neighbor’s house. Even then she had an inkling she had a gift as she constantly beat the boys. And when she joined the Wayne Memorial High School track and field team as a freshman, Battle wanted something to do outside of the classroom.

Soon after it became clear — she was fast. By the end of her high school career she was the Michigan state champion in the 100-meter dash.

Next month, the Ohio State track and field star will represent Team USA in the 2020 Tokyo Olympics in the 200-meter dash.

“When I was in high school, I would say my freshman year I was just doing it to be like a part of something,” Battle said. “But once I realized, like, the gift that I have and how good I am at this sport, I started to take it seriously because I like winning.

“When we were little, we used to race people in the street to the stop sign or to a neighbor’s house. But I would like beat the boys. And you know, I’m just out there having fun. … And then I just was like: ‘Oh I’m kind of fast.'”

One of the fastest women in the world, in fact.

And now the time at Ohio State has prepared her for this moment. Set to graduate in August with a degree in human development and family sciences, she won Big Ten Freshman of the year in 2018, and has developed into one of the top sprinters in the nation. Battle’s won seven individual Big Ten titles across the last three years and was the Big Ten’s Outdoor Track Athlete of the Year this spring after winning conference championships in the 100- and 200-meter dashes.

All of the experience and training in Columbus led to her record-breaking performance at the Olympic Trials. Battle became the first collegiate runner to sprint a wind-legal time faster than 22 seconds in the 200-meter dash with a 21.95-second time. Her personal record was good enough for a third-place finish and to secure her spot on the team. 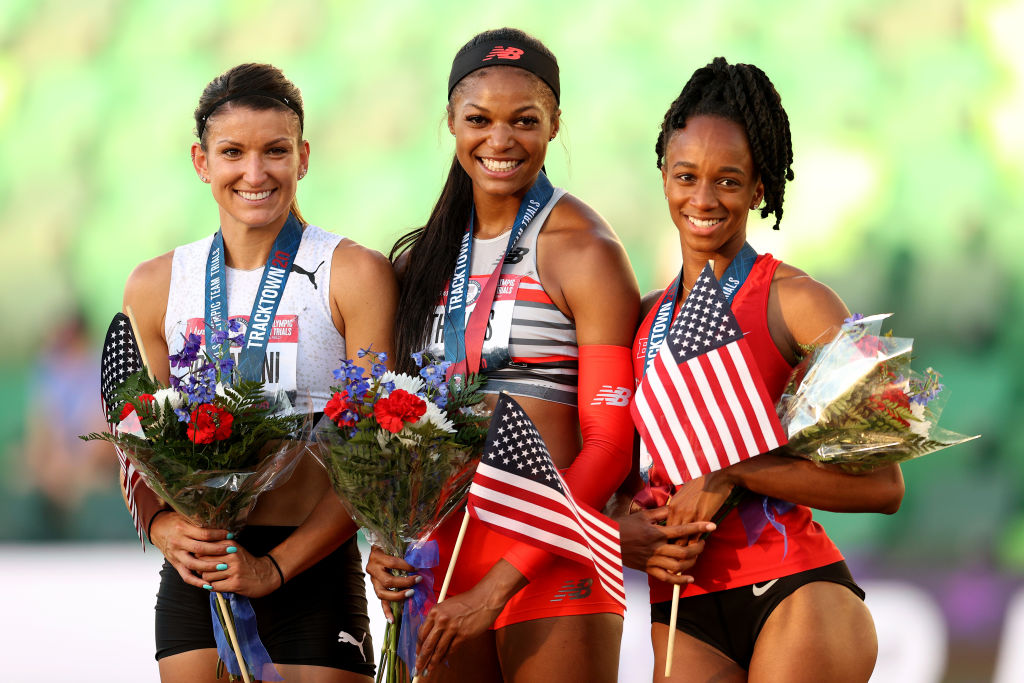 â€œMy dreams are coming true,â€ Battle said. â€œBeing little and not taking track so serious and to become an Olympian, itâ€™s unbelievable.â€

When she arrives in Tokyo, Battle will be one of five Ohio State track and field athletes representing countries from around the world.

The Buckeyes brand brought her to Columbus, and it is one of the reasons she has a legitimate shot of winning the 200-meter competition next month. Her medal quest begins Aug 2. when first-round competition in the 200-meter starts. The semifinals will be held the same day with the final set for Aug. 3.

Anavia Battle will be representing herself, her country and Ohio State when she takes to the track next month.

“People don’t really look into our track program — and seeing that we have five athletes going, I think that’s pretty amazing, shine some light over here,” she said. “We have a lot of talent on the team that goes unnoticed. And I think that this will actually shed some light to them, too. And have people look more into the program and see the talent that we have.”