Ohio State will benefit in big way after keeping faith in Austin Mack
Aritcle written by:

COLUMBUS — The makings of an unforgettable night for Austin Mack were clear right from the opening drive.

It turned out to be one that the Ohio State wide receiver needed to erase from his memory while it was still happening.

In a unit that isnâ€™t short on either depth or talent and has playmakers in virtually every shape and size, Mack is almost always the first guy pointed to by the Buckeyes as the complete package for the position. He runs sharp routes, heâ€™s fast, confident, willing to embrace contact — and has regularly shown some of the strongest hands on the team.

So watching one sure touchdown slip through his fingers was surprising. Seeing a second easy grab hit the turf was shocking. And by the time Mack had his third drop in what would eventually be a 40-28 win for Ohio State over TCU, it was fair to wonder if the usual go-to target should just go straight to the bench instead.

â€œAustin is usually a reliable guy,â€ offensive coordinator Ryan Day said. â€œAnd the big thing we talked about going into the game was that this going to be a fight. You heard the guys talking about it. And when you go into a fight, sometimes you get hit. And when you get hit, you canâ€™t flinch.

â€œSo, we didnâ€™t flinch. We kept putting Austin back in there.â€

The patience, faith and perseverance would pay off down the stretch. Mack shook off what appeared to be a case of the catching yips with a pair of third-quarter receptions as part of the onslaught that buried the Horned Frogs on Saturday night at AT&T Stadium. Standing by him in a tough time might yield even more dividends as the season progresses.

It would have been almost impossible to imagine Ohio State would even be facing a decision about sticking with Mack in the rotation after the first three plays of the game. By that point, the junior already had two catches and had flashed his incredible potential with a highlight-reel snag of a 48-yard deep ball from Dwayne Haskins. But the drive ended with Mack failing to corral a surefire touchdown in the back of the end zone, and he appeared to have fumbled away his confidence in the process. 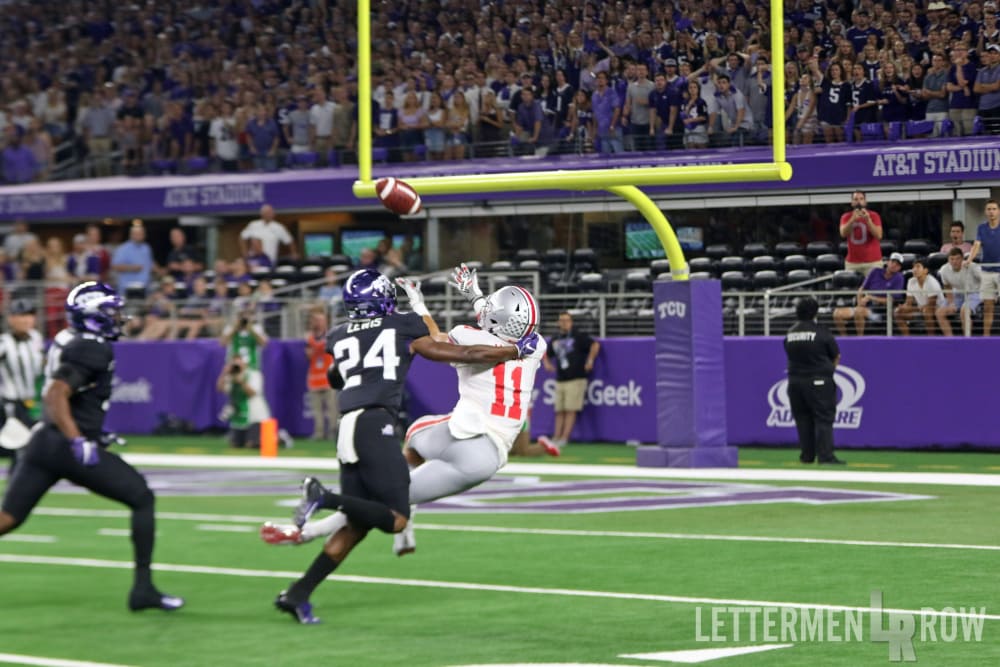 Austin Mack came up with a sensation catch for Ohio State in the win over TCU. (Birm/Lettermen Row)

â€œWe are really close,â€ Haskins said. â€œSo I was just saying, â€˜Look, play. If you mess up, Iâ€™m going to keep coming to you, throwing you the ball.â€™

â€œIt was hard for him having those drops like that in key moments in the game, but he kept pushing. And I relied on him again in the big moments, and he came through for me.â€

That gap in between the hot start and the bounce-back moment would understandably cause some concern, but the Buckeyes never wavered with Mack. Given his work ethic and potentially some new-found motivation to avoid another stretch like that, that rough patch could wind up laying the foundation for Mack to tap into his potential more consistently and take his game to an even higher level moving forward.

With all those other wide receivers on the field, that doesnâ€™t necessarily mean his numbers are going to skyrocket. But obviously the Buckeyes are never going to be shy about looking Mackâ€™s way, even when he doesnâ€™t have his best stuff.

â€œHe came back and he made a catch,â€ Day said. â€œThen he made another catch. So, we believe in our guys.

â€œWe know what we see every day in practice. We trust that. Some days guys are going to maybe put one on the ground. We donâ€™t like that, but we believe in our guys. And when things donâ€™t go well, weâ€™ve got to stick together.â€

More often than not, the ball tends to stick to Austin Mack as well.

And heâ€™s going to have a lot more chances to make some positive memories with the Buckeyes coming his way soon.