COLUMBUS — A 28-point leap into the first quarter on the way to a 24-point win. A total offense advantage of 469-228. The successful, sometimes spectacular launch of the Justin Fields quarterback era.

There were plenty of reasons for the restocked Ohio State offensive line to feel good about its season debut. Yes, there were the droughts of the second and start of the third quarters to reconsider, but more on that later.

Through the first several possessions of the 45-21 win over Florida Atlantic on Saturday in Ohio Stadium, the Ohio State offensive line was standing â€˜em up and knocking â€˜em down. Right there in the midst of it all taking care of business was senior right tackle Branden Bowen.

Maybe you remember him â€“ the last time he started a game for the Buckeyes was Oct.7, 2017, in the Horseshoe against Maryland. He left prematurely and on a cart, courtesy of a broken lower left leg. He had a setback last year when he tried to return; the break had not healed properly and had to be readdressed.

That made this past week one of triumph for the personable, new-father Bowen — first when he was named the starter at right tackle ahead of celebrated 2018 recruit Nicholas Petit-Frere, and second when he actually made the start, just 22 months since taking that cart ride that included team chief physician Dr. Chris Kaeding holding his air-casted lower leg steady.

â€œItâ€™s definitely really exciting, something that I canâ€™t really describe,â€ Bowen said after the game. â€œBut Iâ€™m just happy to be out there, happy to be with this [offensive] line unit specifically. Weâ€™re having a lot of fun out there.â€

The heat of the action was no time to take stock of his comeback. He said he had done that well before that first possession that saw Fields gallop through a huge hole 51 yards to the opening touchdown.

â€œBefore the game, when we came out to stretch at first, thatâ€™s when I was â€˜Wow,â€™ â€œ Bowen said. â€œRunning down the tunnel, hearing music, hearing the fans — it gave me chills the whole time.â€

As the game progressed, and after Ohio State had built a 28-0 lead, then came the sobering part of the opener. The Florida Atlantic defense made adjustments, and for a while the Buckeyes line had trouble protecting Fields on some plays and opening holes for J.K. Dobbins on others.

Some of that dropoff fell at the feet of Fields, coach Ryan Day indicated, meaning he missed on some pass protection calls at the line and at times made the wrong choice on option decisions, to be expected from a sophomore first-time starter. 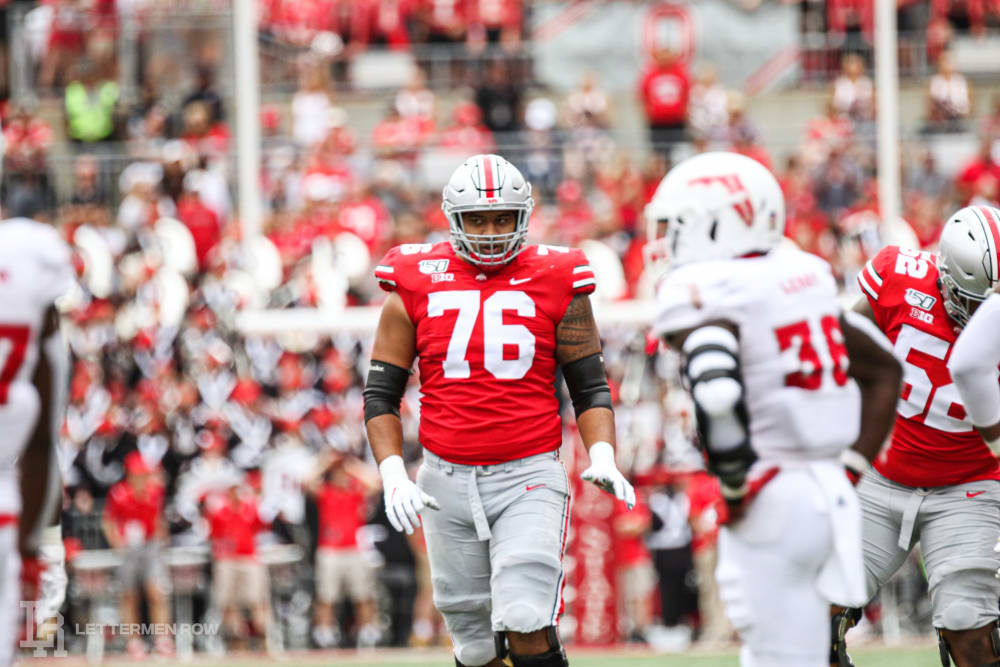 Ohio State right tackle Branden Bowen made his long-awaited return to the starting lineup for the Buckeyes. (Birm/Lettermen Row)

â€œI think itâ€™s just our assignments, really, understanding â€“ you know, sometimes teams throw stuff at us that we havenâ€™t seen on film,â€ Bowen said. â€œItâ€™s coming over to the sideline, not panicking, working out what happened on that last drive to help us on the next few drives.â€

Besides, the final totals are what tell the real story. And Branden Bowen was just glad to be a major character in the story again.