Following the tradition of the helmet stickersÂ that dates back to the days of Woody Hayes, Lettermen Row shares out our version of the award after every game for the best performers on offense, defense and special teams for the Buckeyes.

A five-star talent from nearby Pickerington, Sawyer has been talked about as one of the next great Buckeyes defensive ends since he committed three years ago. But now the talk of potential is over. Sawyer has his first results inside Ohio Stadium to prove he can be what is expected of him — and more.

Sawyer dominated the Ohio State Spring Game on Saturday afternoon. He had four sacks. He forced a fumble. He made every offensive tackle he lined up across from look like he was still playing high school football. Except he was in an Ohio State uniform for the first time in the Horseshoe.

The latest performance was just an extension of what the Buckeyes have seen all spring from the early-enrollee.

Sawyer wasn’t tallying his sacks by going against Thayer Munford and Nicholas Petit-Frere, two of the best offensive tackles in the country. The results against better offensive linemen is still yet to be seen.

But while showing off his power, speed and agility from the edge, Sawyer is making a push to enter the rotation of one of the country’s deepest defensive line units. He came in and immediately began doing so in January. It’s all paying off at the end of spring, just 15 practice sessions into his career.

â€œOff to a great start, for sure,” Ohio State coach Ryan Day said. “Heâ€™s earning more and more reps, heâ€™s working his way up the depth chart. I think across the board, our [defensive] line was solid this year. We have some good depth. Jack in particular came in with a lot of confidence, and heâ€™s made a lot of plays. What you saw today was pretty much most every practice out there. If he can keep building, getting stronger and keep building, then hopefully heâ€™s going to have an impact and be able to participate early in the season.

“We have a couple big games early on, so the more depth we have the better off weâ€™re going to be.â€

Sawyer proved he can help the Buckeyes early in the fall, but he was just one of a handful of impressive Ohio State stars during the Spring Game. As always, Lettermen Row is handing out Buckeye Leaves from the exhibition in the Horseshoe. 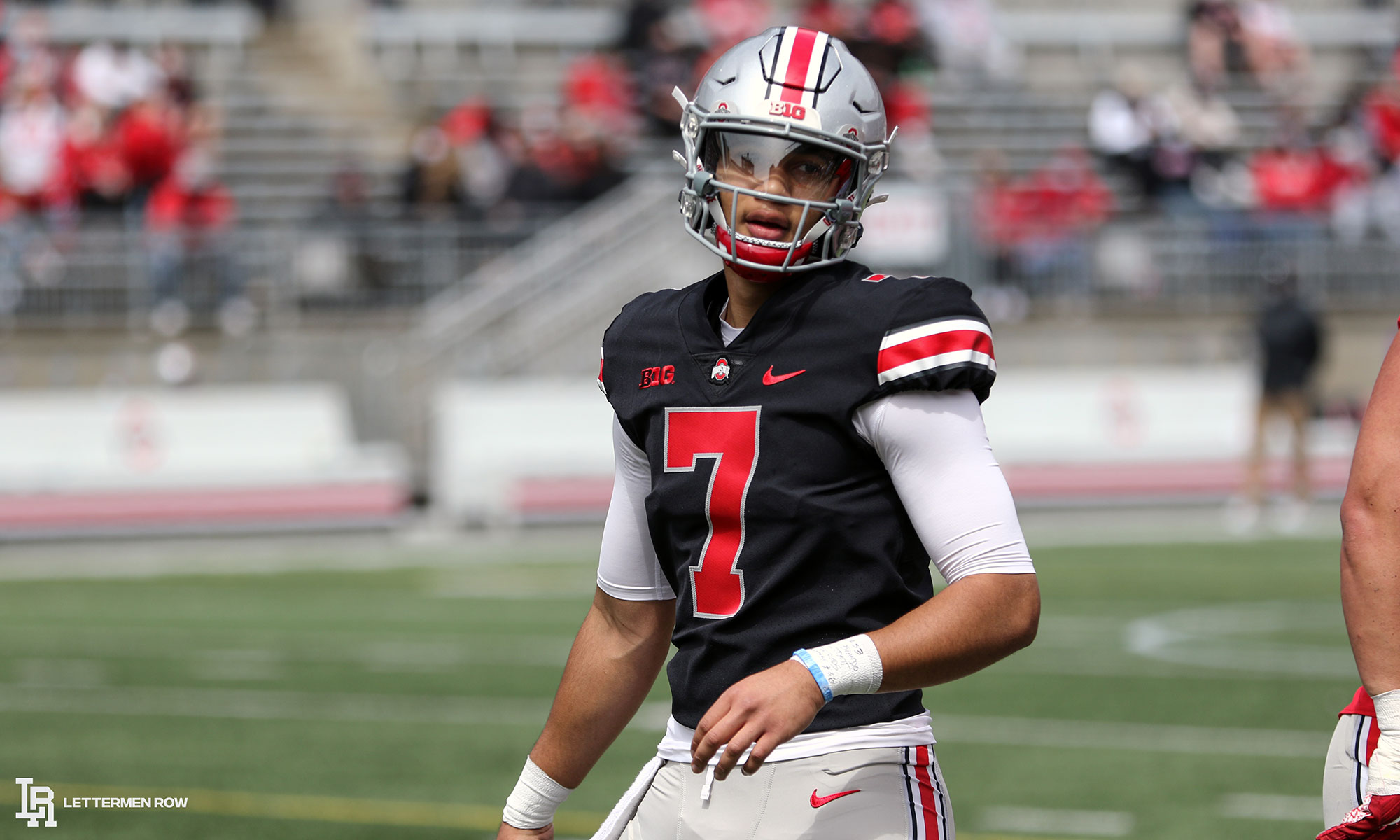 All the attention this spring has been on the quarterback battle at Ohio State. As the spring has progressed, the Buckeyes have remained tight-lipped about the state of the competition, opting to not share who has pulled ahead or impressed during the 15 practice sessions. But sophomore C.J. Stroud made a clear statement Saturday in the Spring Game. He’s the quarterback to beat in the race. Stroud had a pair of touchdown passes, commanded the offense and looked ready to take control of first-team reps throughout the afternoon. The Buckeyes may continue to evaluate the quarterback situation into fall camp, but Stroud’s performance left little doubt into who is leading the competition heading into summer.

Jack Sawyer hasn’t played in a competitive football game since his junior season of high school. And although it’s hard to classify the spring game as real action, Sawyer didn’t seem rusty at all. The former five-star prospect lived up to the hype — and then some — in his first appearance inside Ohio Stadium. Sawyer dominated four different offensive tackles he faced. He tallied four sacks to go along with a couple of pressures and a forced fumble of quarterback Kyle McCord. In his first impression after a stellar opening spring, Sawyer delivered a glimpse of what his Ohio State career could look like over the next three seasons — scary. He is only getting started. 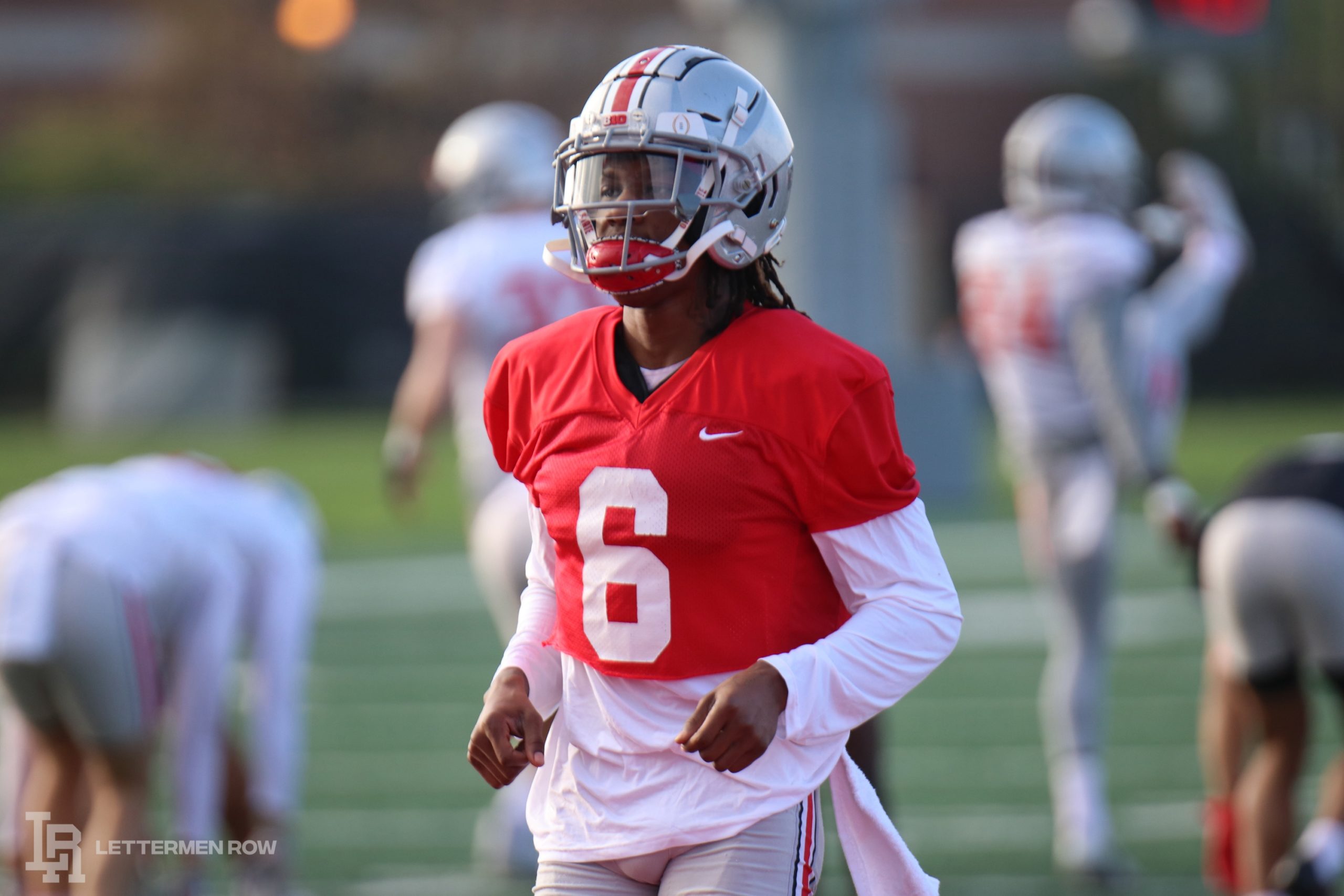 Jameson Williams could be a dangerous option at kick returner. (Birm/Lettermen Row)

Ohio State didn’t practice any live kick returns or punt returns, but Jameson Williams caught numerous kickoffs and punts in the practice reps. After going through a carousel of kick returners over the last few seasons, the Buckeyes could find Williams’ speed and reliability to be a luxury they haven’t had in years in the return game. The spring game was just one small sample, and it wasn’t much to see, but Williams has a chance to find a role in the return game and stay there. And maybe he could be the returner to snap the Buckeyes streak of no kick returns for a touchdown since 2010.