COLUMBUS — If Ohio State busted out the speed gun to measure the fastball from Justin Fields or had him compete in a longest-throw competition against a couple of his predecessors, maybe he wouldn’t win.

When it comes to raw, awe-inspiring power, the edge there would probably go to former Buckeyes Cardale Jones or Dwayne Haskins. But Fields has more than enough strength in his arm to potentially top the production of both guys, which for Ryan Day is just the latest example to the limitations of measuring passers solely by how hard they can sling the pigskin.

What matters most to the Buckeyes coach is timing, accuracy and command of the offense — all of which wind up being more important to Day’s evaluation than the ability to make a receiver’s hands sting. Of course, it doesn’t hurt that Fields can also uncork some bullets, which he did again last week at Northwestern during a four-touchdown performance that included a few difficult throws that he made appear routine.

“Arm strength is a funny thing,” Day said. “Being a quarterback, we can talk for hours about what really arm strength is. It’s not the strength of your arm physically. It’s all about sequencing, how you can take energy from the ground up. He does an excellent job of that. 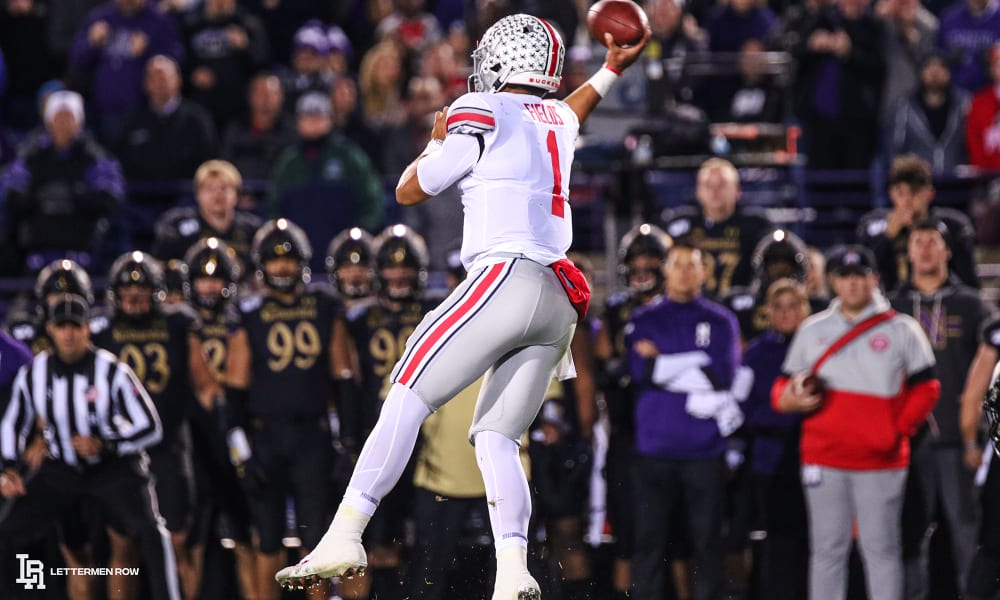 “So much of it has to do with your footwork, making sure your cleats are in the ground, you’re driving the football. Some guys have naturally better whip than other guys, push the ball down the field.Â There’s a certain level of just natural ability. But a lot of it is coaching and understanding the footwork, timing of the footwork to make sure the ball comes out at the right time with the right pace.Â He’s been very good at that. Is he perfect? No. He’s doing a good job so far.”

The Buckeyes could hardly have asked for much more from a first-time starter who is undefeated in his first seven games with the program, has completed nearly 71 percent of his passes and has already accounted for 30 touchdowns this season.

Fields isn’t done growing, of course. And he’s also facing a major test from one of the nation’s best defenses on Saturday against Wisconsin — and another strong outing might thrust him right into the thick of the Heisman Trophy race.

What has allowed Justin Fields to flourish in the Ohio State offense? How impressive have some of the throws he’s made recently been for the Buckeyes? Where could he still keep improving down the stretch? Former Heisman Trophy winner Troy Smith was back in the Lettermen Row film lab breaking down the tape and trying to answer those questions in the latest episode of BuckIQ.