Whether or not there are there ‘must get’ prospects in recruiting is up for debate but there’s no doubt that some recruits are, for whatever reason, more important for Ohio State in a specific recruiting cycle. For the Buckeyes and the Class of 2022, those players are becoming clear. Who’s onÂ The List? Today’s featured player is Center Grove High School defensive lineman Caden Curry.

There just aren’t many big-time defensive tackle prospects within a three-hour drive of Columbus anymore. The demographics have changed and it’s indisputable.

That’s why, when prospects like Greenwood (Ind.) Center Grove defensive lineman Caden Curry come along, it’s vital for Ohio State to find some way to be the school he eventually decides to play for.

When the Buckeyes spend a year-plus recruiting a player from Central Indiana, there’s got to be a good reason. That’s why the 6-foot-4, 260-pound Curry is onÂ The List of must-get 2022 recruits for Ohio State on the recruiting trail. 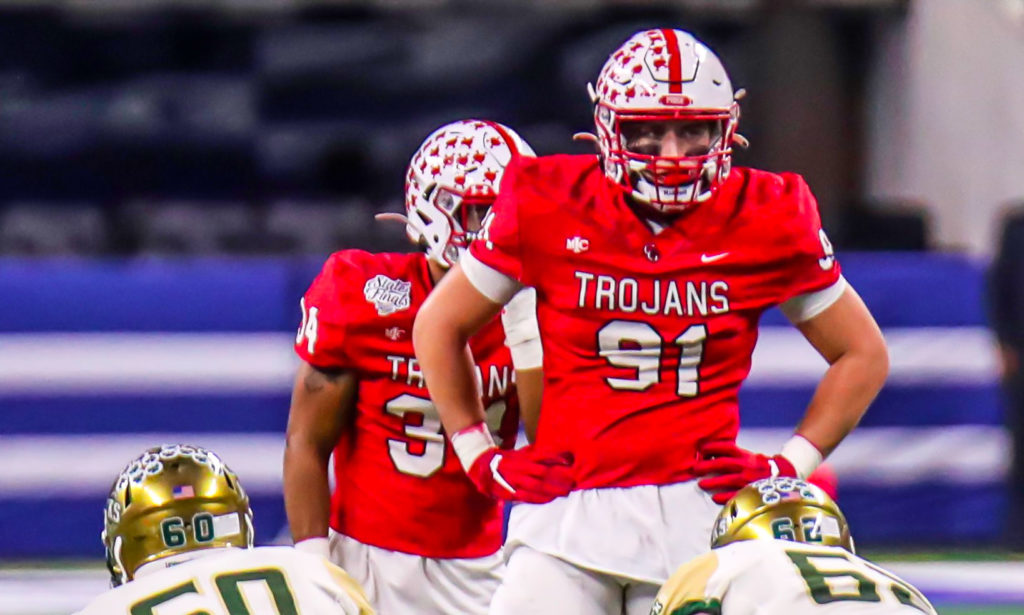 Caden Curry can play inside or outside on the defensive line and is the highest-ranked defensive lineman north of the Mason-Dixon Line in the Class of 2022. (Caden Curry/Twitter)

And the battle for Curry is shaping up to be a big one down the stretch for Ryan Day, Larry Johnson and the rest of the Buckeyes coaching staff. Ohio State, Clemson, Notre Dame, Alabama are all very heavily in the mix for the second-ranked player in Indiana, but he’s been unable to make any visits to that group of schools and it’s forced his recruitment into an unexpected and unfortunate standstill.

So whenever the NCAA allows him to, there’s going to be an all-out blitz for Curry, a player who can play inside or out on the defensive line, and for Ohio State there’s no doubt that his eventual decision is one that will shape the entirety of the Buckeyes 2022 recruiting class.

What is about Caden Curry that puts on theÂ The List? Jeremy Birmingham and Spencer Holbrook break down his recruitment and why it’s so important for Ryan Day and Ohio State.