COLUMBUS â€” Caleb Downs is just a rising junior, but his attention to detail had caught the attention of Ohio State assistant Matt Barnes.

It was a simple matter of putting his feet and hips and eyes in the right place the first time he worked through the drill Barnes was teaching. Most players this young don’t get itÂ that quick.

Downs, the country’s No. 3-ranked 2023 safety, flew through the rest of the drills with a similar nonchalance. He makes it look easy on the football field. That’s part of his DNA. His father Gary played in the NFL, and his brother Josh was recruited by Ohio State as a receiver prospect in the Class of 2020 but ultimately picked North Carolina. This is a family that understands the work that goes into doing it right.

So for Caleb Downs seeing Ohio State the first time, it was the Buckeyes attention to detail that made the difference. That’s what he’ll take away from his first trip to Columbus.

Ryan Day made a big first impression on Downs as well. 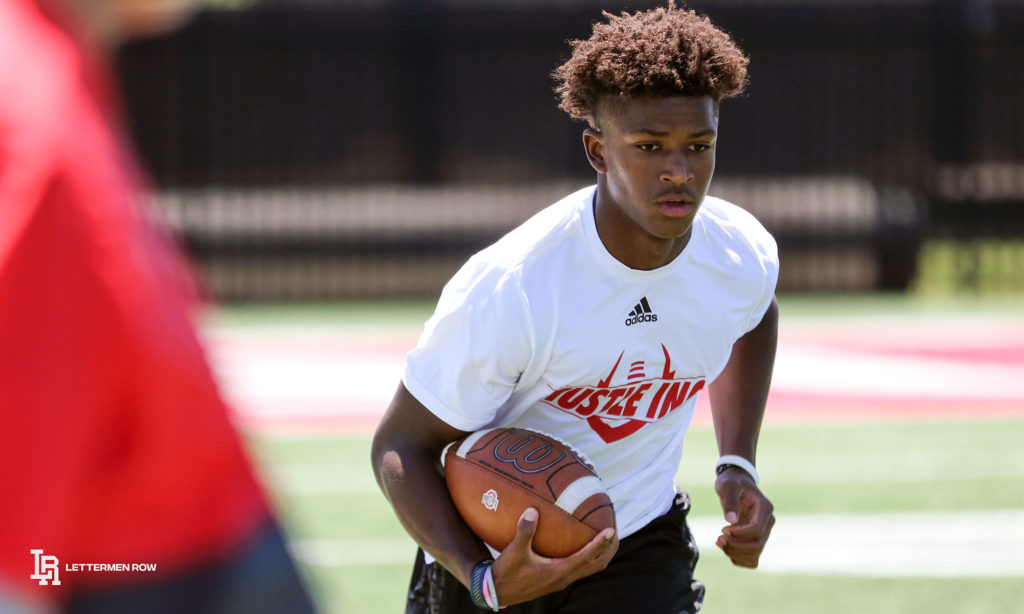 “Man, Coach Day is just a really personable guy,” he said. “He knows how to recruit the right kind of people and he knows how to lead a team. He’s a family man, and the guys here love him. I can see why. There’s not a thing bad you can say about him.”

One of the guys that Downs knows well at Ohio State is Jordan Hancock, a Buckeyes freshman defensive back. He helped connect the Ohio State staff with Downs when they offered him back in February. Downs is also close with fellow 2023 Georgia stars A.J. Harris, who recently visited Ohio State, and Ethan Nation, who was in town with him this week. That group talks a lot about playing together at the next level, and it’s something he hopes can play out.

“We’ve told a lot of places that we want to play together,” Caleb Downs said. “And we’re going to keep saying that. But they’ll be my brothers even if it doesn’t work out.”

The 6-foot, 185-pound Downs isn’t going to be wowed by facilities. He’s seen great weight rooms all over. The Mill Creek (Hoschton, Ga.) High School three-sport athlete has been to Clemson. He’s been to Georgia. He’ll be at Alabama this weekend. The same kind ofÂ bells and whistles are everywhere.

“Everyone has a lot of the same stuff,” Downs said. “And some schools will excel in areas where others don’t. So I really have to key in on what I’m looking for in a school. I’m looking for a place that can develop me into the player I want to be.

Coming from Atlanta, Downs likes the feel of the city of Columbus and sees no problem with leaving the confines of home for college.

“Everybody tells me it’s a city up here,” he said. “But you don’t know what a city looks like or get the feel of it until you’re there. I learned a lot about Columbus, so it was surprising. I had high expectations, and it met them. It feels familiar to me. I’ve never been one to shy away from a challenge and moving to a new place for school isn’t a big deal for me.”

That’s just another detail in the big picture of recruiting Caleb Downs. Put it on the teach tape.