COLUMBUS — Maybe the turning point is already in the rearview mirror for Chris Holtmann.

After all, heâ€™s already guided Ohio State back to the NCAA Tournament. A successful first recruiting class was put together on the fly and has quickly impressed during summer workouts. Heck, he even had an NBA draft pick with an impressive contract to point to after less than a year on the job.

All of that reinforced the fact that Holtmann was absolutely the right guy for the Buckeyes when the time for change arrived last year. But if the future is really going to be as bright as it seems, Ohio State might be looking back at his work over the last couple months as the pivotal juncture when the momentum truly shifted — while Holtmannâ€™s hair was falling out and his eyes were getting infected.

â€œYeah, five years from now, I donâ€™t know what Iâ€™m going to look like,â€ Holtmann joked. â€œI think everybody knows recruiting is really cutthroat. Sometimes youâ€™ve got to wear the battle scars a little bit from a week on the road.

It might not look like it thanks to that bald patch on his head in April or the glasses he had to wear to his press conference before practice on Tuesday. But Holtmann has Ohio State collectively as healthy as it has been in years.

Chris Holtmann is on a recruiting roll

The on-the-court success of his first season in charge of the Buckeyes is obviously a significant factor and a key part of his sales pitch. But Holtmann and his staff have also proven to be relentless, tireless workers on the recruiting trail, using that track record and building relationships to put the program on pace to once again be a national contender in relatively short order. 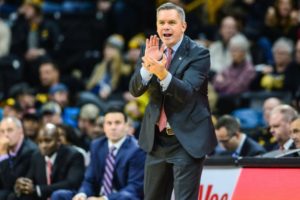 That, of course, might prove to be difficult this year, even after going out and landing graduate transfer Keyshawn Woods as part of Holtmannâ€™s busy summer — which will end with a tour of Spain with the current Buckeyes in August. Thatâ€™s a nice head start for his second season with the program, though replacing Keita Bates-Diop and Jaeâ€™Sean Tate remains a daunting challenge for a roster that will be relying on a lot of new faces.

But beyond this season, the Buckeyes are clearing building something special following 5-star point guard DJ Cartonâ€™s pledge to the Buckeyes over the weekend. That gave Ohio State a pair of top-30 recruits in the next class after already getting a commitment from Alonzo Gaffney, and it previously added Florida State guard CJ Walker on the transfer market.

â€œWell, I think [on-court and recruiting success] go hand in hand, for sure,â€ Holtmann said. â€œI just think for us, we have got to continue to be really diligent in recruiting. And our staff is that way, we have some dogs when it comes to recruiting. They really, really are aggressive and do a tremendous job. Now, that doesnâ€™t always translate into recruiting success, but I believe if you do it enough and you get there close enough with certain kids, youâ€™ll get your fair share. We have to continue to do that.

â€œHopefully we can put quality class after quality class together — and guys that fit us, too. Itâ€™s not going to be for everyone.â€

Chasing down those guys clearly isnâ€™t always easy, and Holtmann hasnâ€™t been able to hide the physical toll the grind has taken on his body.

There may even been more rough patches coming this season, at least compared to what the Buckeyes did in Year One and the remarkable turnaround Holtmann engineered right away. But heâ€™s clearly not afraid of a little work, and Ohio State is set to reap the benefits for years to come.

â€œWeâ€™re certainly excited about these young kids we have here now, and then hopefully continuing to put together quality classes together,â€ Chris Holtmann said. â€œWe feel like weâ€™ve gotten off to a quality start.â€

The best, though, appears to be on the road ahead.