The speculation, debate and conversations about Ohio State never end, and Lettermen Row is always ready to dive into the discussions. All week long, senior writer Austin Ward will field topics about the Buckeyes submitted by readers and break down anything that’s on the minds of the Best Damn Fans in the Land. Have a question that needs to be tackled, like the one today about Ohio State and the place in history for Chris Olave and Garrett Wilson as part of Position Week? Send it in right here — and check back daily for the answers.

Are Olave and Wilson the most talented duo of WRs ever at Ohio State?

There is no debate about the top receiving tandem in the nation this season.

The conversation can get a little trickier, though, when Chris Olave and Garrett Wilson are competing against history — especially at a program with as rich of a tradition at the position as Ohio State.

There might already be a strong case to be made that the current combination is the best the Buckeyes have ever seen, thanks in large part to what Olave has accomplished in three seasons and the undeniable athleticism Wilson brings to the position. But the body of work is still incomplete, and those talented targets are still going to have to go out and earn their spots at the top of the all-time list this season before it can be official.

The standard to chase? The Buckeyes could mix-and-match first-round receivers during another ridiculous run at the position in the mid-2000s, a stretch that included four of those guys in as many years. With all due respect to Michael Jenkins and Anthony Gonzalez, the pick here would be the matchup nightmares created by putting the lightning-fast Ted Ginn Jr. on the field with the freakish Santonio Holmes — a twin threat that reached its peak with simultaneous 100-yard receiving games in 2005 against Notre Dame in the Fiesta Bowl. 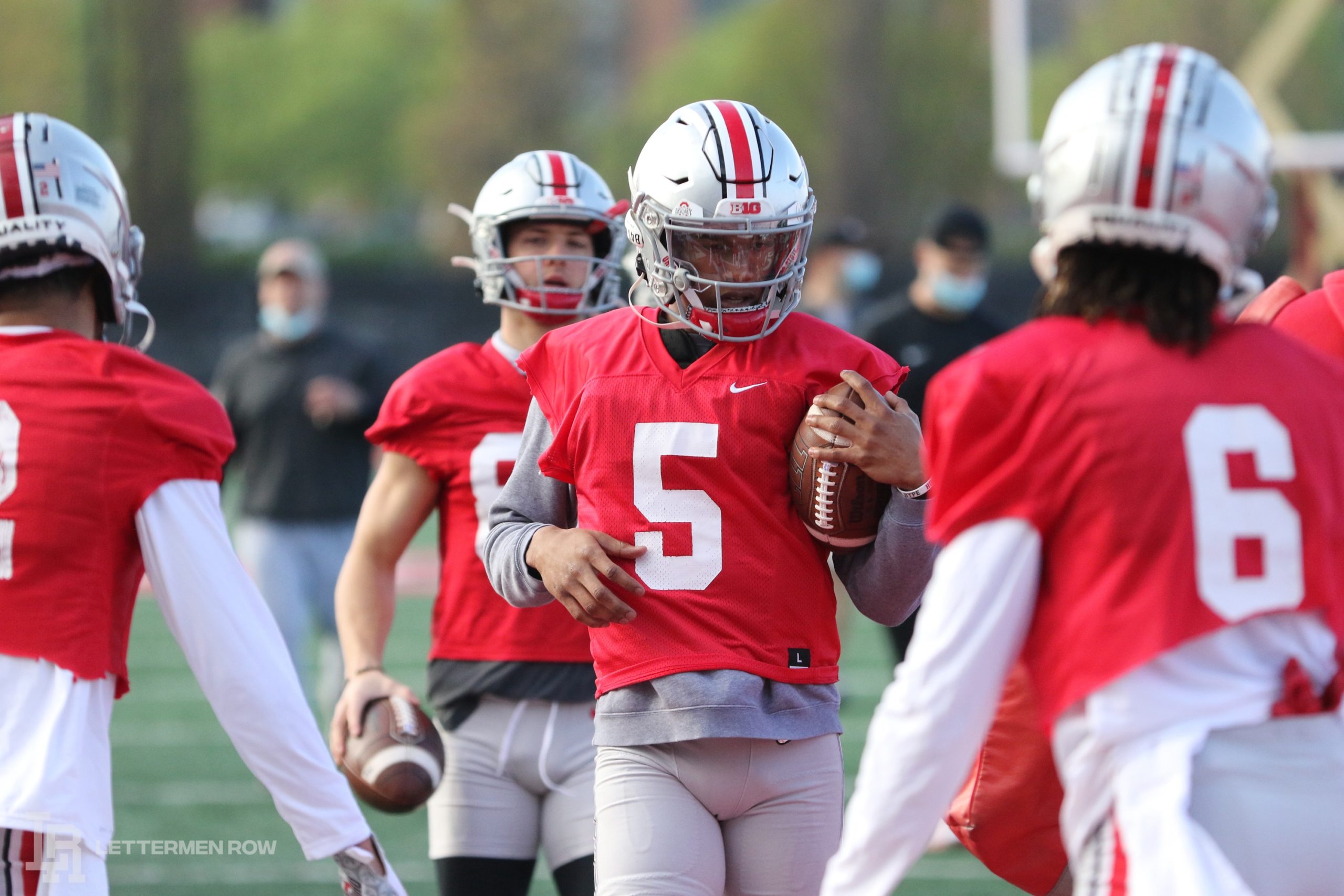 It’s difficult to compare the numbers for those wideouts in that era compared to what Olave and Wilson can do in a passing attack that is lightyears more advanced than what Jim Tressel was operating then. But that might only make the combined 104 catches for 1,780 yards and 15 touchdowns even more impressive for Holmes and Ginn in 2005. Those guys also already have the advantage of proven evidence they could take their games to the NFL level and thrive, while Olave and Wilson are still in the projected-first-round-pick stage of their careers with the Buckeyes.

Olave’s decision to return for his senior season gives him a legitimate shot at rewriting the record books and leaving a remarkable legacy for the Buckeyes. The fact that Wilson is on the other side of the formation before he almost certainly jumps early to the NFL will make it almost impossible for opponents to put double-coverage on both of them, which benefits them individually and the Buckeyes offense collectively.

Yes, the Buckeyes are going to be breaking in a first-time starter at quarterback. But that guy will be throwing to a tandem that is building a legitimate case as the best Ohio State has ever seen, which obviously helps.

Chris Olave and Garrett Wilson are chasing a national title, first and foremost. But they’ll be measuring themselves against Buckeyes history along the way.