The speculation, debate and conversations about Ohio State never end, and Lettermen Row is always ready to dive into the discussions. All week long, senior writer Austin Ward will field topics on Ryan Day and the Buckeyes submitted by readers and break down anything that’s on the minds of the Best Damn Fans in the Land. Have a question that needs to be tackled, like the one today about Chris Olave and the wide receivers? Send it in right here — and check back daily for the answers.

Already a legendary figure in The Game and a key contributor in a Big Ten championship game, it might seem like Chris Olave has already arrived as a star for Ohio State.

But the sophomore is really only getting started, and that strong finish to his debut season is really just an indication of how much potential is still ahead of Olave. Even with those highlight-reel catches, the three touchdowns and the blocked punt that sparked the Buckeyes in the blowout over Michigan, Olave finished with just 12 catches overall last year. So, there’s still an incredible amount of room to grow, which will make him one of the most important players to watch as he develops through spring ball, summer workouts and into training camp.

Even at the NFL Combine last weekend where the former leaders of the wide receiver unit were putting on a show in the on-field workouts, guys like Terry McLaurin still took time to address the future of Zone 6 — and Olave was the first guy mentioned. Ohio State already knows what K.J. Hill, Austin Mack and Binjimen Victor can provide, and there is plenty of optimism with all three of them. But it’s Olave who continues to generate the most buzz for the way he works on the practice field, his impressive set of skills and a knack for delivering game-changing plays at critical moments. 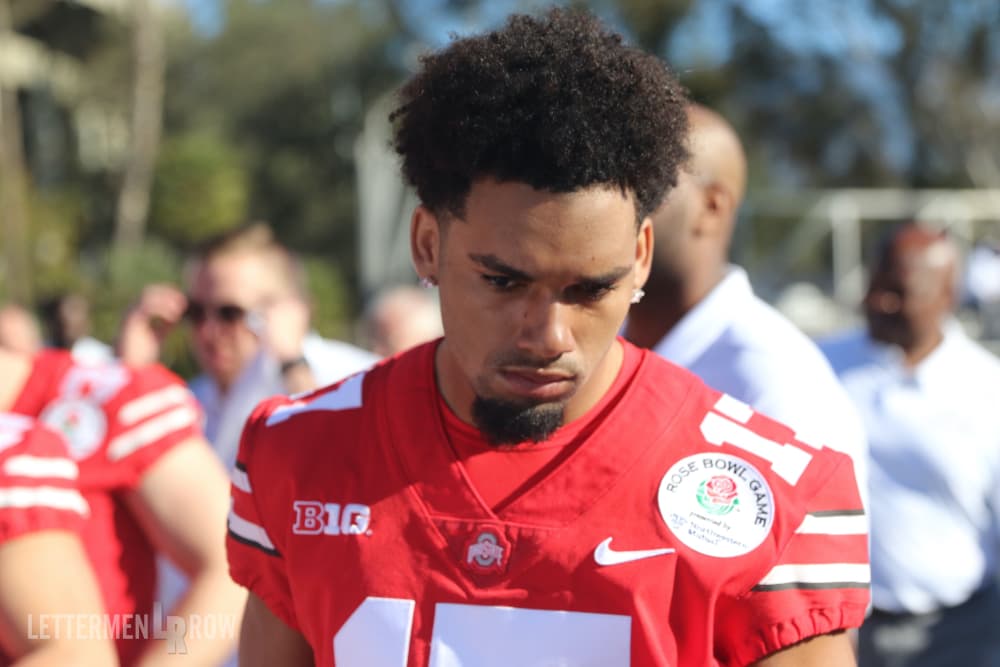 Ohio State wide receiver Chris Olave has a bright future ahead of him with the Buckeyes. (Birm/Lettermen Row)

“That kid is the real deal,” McLaurin said. “To come in as a freshman and to have done what heâ€™s done, you canâ€™t ask for much more. Austin went down [last season due to injury], thatâ€™s a big part of our rotation, and he picked up the slack.

“Heâ€™s going to be a great player — not just on the field but off the field. Heâ€™s raised right and Iâ€™m happy to see what his future holds.”

The expectations have been growing since the moment Olave arrived on campus, and there were whispers before the season started that he could crack that deep, talented rotation right away. That ultimately didn’t happen instantly, but by November there was no holding him back. All of his catches but two came during the last three weeks of the regular season and in the Big Ten title game, serving as both important team production for the conference champs and invaluable individual momentum for Olave heading into a year when he should be a key cog for the wideouts.

There is plenty for Ohio State to be excited about at wide receiver right now. But Chris Olave with another year to develop might be at the top of the list.