COLUMBUS — Damon Arnette was aware that many expected him to be done at Ohio State as he smiled in the Rose Bowl locker room.

After four years with the Buckeyes and plenty of ups and downs along the way, there even seemed to be a few people outside the program who actually wanted him to move on to the next level.

Arnette toyed with that idea, of course. His athleticism, experience and a frame that was built to play cornerback could have made him an NFL Draft pick. Instead, though, Ohio State gets to use it all for one more season, putting it in a spot that most secondaries around the country will look at with envy.

There may still be skeptics about Arnette, and that’s fine. The rising senior admits he isn’t a finished product yet, and his return is not only a chance for him to improve — it’s a big deal for a defense trying to get back to the standard the Silver Bullets have historically set.

â€œI feel like it could have gone either way,â€ Arnette said after the Rose Bowl. â€œJust based off [the history] of people coming here, start two years and then itâ€™s natural for them to leave.

“But on the other hand, somebody could feel like itâ€™s premature [to leave] because they could still get better.” 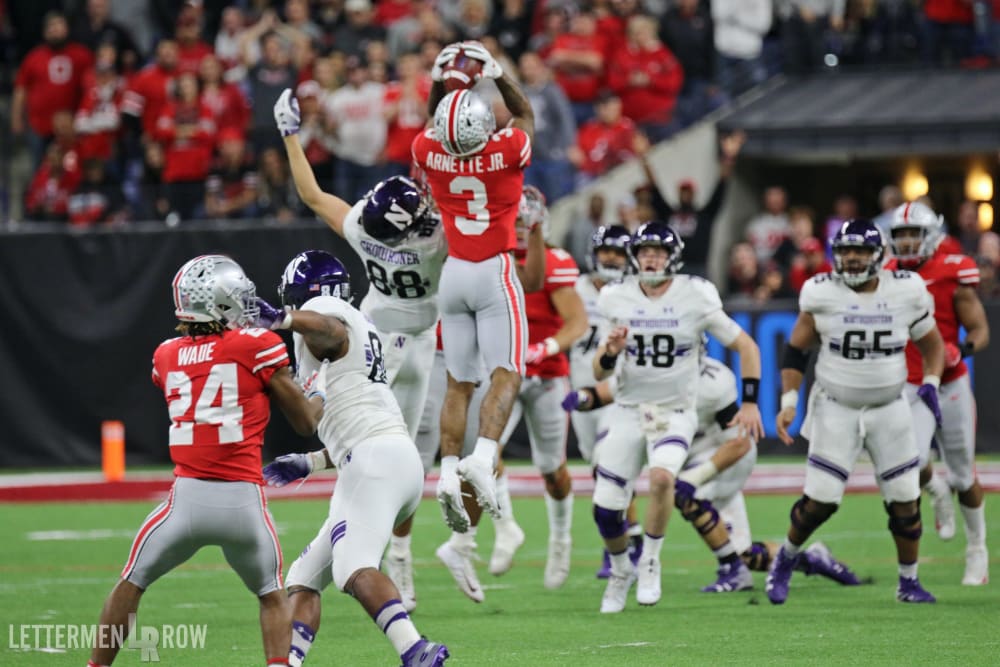 The assumption heading out to California last month was that Arnette was leaning toward leaving. But the fact that he even acknowledged the latter perhaps was more telling than it seemed at the time, since the normally brash, confident Arnette wasn’t hiding from the truth that there was room to grow.

Yes, there have been times where Arnette has been beat in coverage. Sure, he’s been flagged for pass interference more times than Ohio State would like. No, he’s not yet looked like the next first-round pick to roll off the cornerback assembly line the Buckeyes have built.

But much of the criticism that has come Arnette’s way is undeserved, and he was probably much closer to being Ohio State’s most consistent cornerback last season than he was a liability for the defense as a whole. And if the Buckeyes didn’t see the clear value of bringing back a former four-star recruit with multiple years of experience for another season, they could have easily encouraged him to make a different choice.

But having Arnette back is much better than the alternative and can potentially change the dynamic for the entire secondary.

At the most basic level, Ohio State gets veteran leadership and can continue to rotate cornerbacks without sacrificing game experience, knowing Arnette and Jeffrey Okudah are more than capable of leading the way. Maybe Shaun Wade will go out in the spring and make it clear that he should be a bigger factor at cornerback instead of safety — but having those other two guys there could allow him to thrive in more of a hybrid role in the nickel package. Tyreke Johnson, Sevyn Banks and Marcus Williamson are all capable of competing for reps and providing depth. But after years of scrambling due to losing early entrants to the NFL, Arnette putting that off should ease some of the pressure of having to put young guys on the field before they’re ready.

If they’re ready? The Buckeyes will have to play them. Arnette’s decision to come back shouldn’t and won’t come with any guarantee of keeping a starting job. But it’s also worth remembering that he’s plenty talented enough to keep his spot — and strange as it might sound, he could have just left for the NFL if he was worried about losing it.

â€œI really feel like thatâ€™s how it always is, people come and go when itâ€™s their time,â€ Arnette said after the Rose Bowl. â€œBut Iâ€™m excited to see what 2019 holds for everybody in the room.â€

Damon Arnette isn’t leaving it yet. And that’s a huge positive for Ohio State.