FRISCO, Texas â€” Ohio State isn’t out of the race yet for 5-star offensive lineman Darnell Wright, though there’s no doubt that work remains to be done, somewhere.

The country’s No. 1-ranked offensive tackle won’t go so far as to say exactly what the Buckeyes still need to put on display for him. But he’s been to Columbus enough in the last year-and-a-half to know what’s what with Urban Meyer’s football program.

Wright made a recent visit to Ohio State, showing up on campus on June 23 during one of the year’s most important recruiting weekends for the Scarlet and Gray. The trip allowed him to spend more time with offensive line coach Greg Studrawa and provided Ohio State another opportunity to showcase the opportunities offered beyond football. 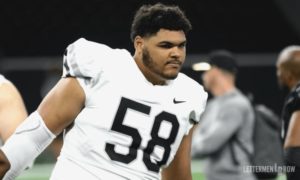 “I want to be able to market myself, and building myself as a brand and also as a football player for the next level, of course,” Wright said. “Thatâ€™s why I liked it so much.”

The Buckeyes have created an environment that is unique, no doubt. The focus on life after the game and their “Brand U” concept is huge for players all over the country. Wright joked that he’s thought about asking other schools recruiting him what they can do to mimic the Ohio State approach.

“I was thinking about that,” Wright said with a grin. “I was there and I was like â€˜I could just take what they’re doing and ask other schools like â€˜What are you doing about this?â€™ And then they can make one.â€

Ohio State, of course, is hoping that its position as first will lead to being the best inÂ that aspect of recruiting, but Wright says that no program recruiting him as any advantage over any others. Ohio State, Tennessee, Alabama, Georgia and many more are still in play.

“IÂ donâ€™t really see how any school can be in front of any other,” he said. “I’ve got a lot of opportunities to go somewhere.”

If the Buckeyes hope to land Wright, they’ll need a combination of factors to come into play. Yes, there’s “Brand U.” There’s also a major need at offensive tackle in the Class of 2019. Studrawa and the relationship he has with the country’s fifth-ranked 2019 prospect will also play a key role.

“[Ohio State’s primary recruiter] is mostly Coach Stud for sure,” he said.”Heâ€™s an energy guy, always in your face. I think Iâ€™ve grown to understand how he is. People are how they are and you take it for how it is. Heâ€™s a cool coach, and I like him.”

What happens next is important. Wright needs to get back to Ohio State to get a better feel for the Buckeyes, but there are not any cemented plans to make an official visit in the fall. That will depend on whatever other schools come into the mix, and it could be impacted by their geography.

“I donâ€™t want to miss out on another school thatâ€™s far away that I may not be able to get down to.”