The speculation, debate and conversations about Ohio State never end, and Lettermen Row is always ready to dive into the discussions. All week long, senior writer Austin Ward will field topics about the Buckeyes submitted by readers and break down anything that’s on the minds of the Best Damn Fans in the Land. Have a question that needs to be tackled, like the one today about Ohio State and offensive linemen like Dawand Jones? Send it in right here — and check back daily for the answers.

How do you think the O-line will shake out?

Dawand Jones is just about physically impossible to overlook, and he certainly isn’t in anybody’s literal shadow at Ohio State.

But maybe because the massive offensive lineman was considered a project and didn’t arrive as one of the nation’s top-ranked recruits, Jones occasionally doesn’t get the attention he probably deserves when it comes to the tackle situation for the Buckeyes.

No, he’s not likely to supplant a healthy Thayer Munford on the left side. And, yes, Nicholas Petit-Frere has the experienced edge on the right with touted freshman Paris Johnson instantly jumping into the mix for first-team reps during his debut spring practice in March. But Jones proved last season that he’s a quick study with a rare package of size and strength, and he’s going to be an important part of the depth this year — and potentially a key cog for the Buckeyes as they build for the future.

It’s certainly fair to consider Jones as ahead of schedule in his development, because Ohio State didn’t recruit him expecting that he would flash enough value not to redshirt in his first year on campus. But Jones first presented an intriguing option as a battering ram with an enormous wingspan who could make field-goal attempts difficult for opponents. And from there, he delivered a crushing block that paved the way for a touchdown at Northwestern that really opened eyes about what he was becoming for the Buckeyes. 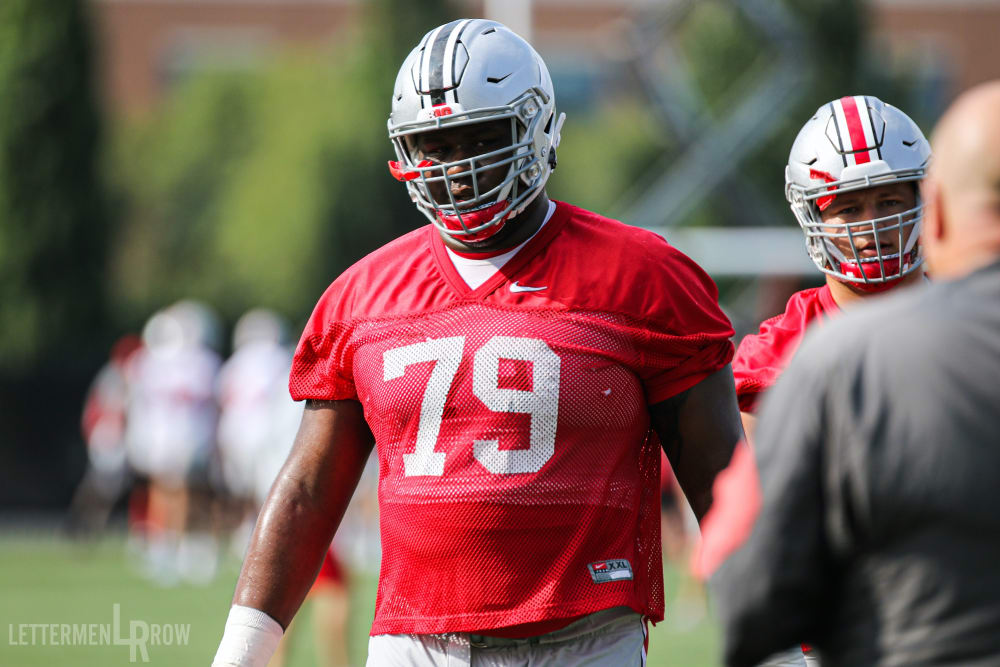 “In our meeting room, we have this wall where all the legends are, all the All-Americans are,” Jones told Lettermen RowÂ late last year. “And thatâ€™s what Iâ€™m just chasing, honestly. On my paper that I have where we have our goals, [itâ€™s written down] to be the next Orlando Pace. Thatâ€™s my goal, honestly, going out there.

“I write down those goals every day and try to live it out every day in practice.”

That single-minded focus on a mission fuels his workouts on the field to keep improving technically and off the field keeps him locked in on managing his weight. And if Jones stays on the pace he set as a freshman, it’s much easier now to envision him becoming a star at Ohio State than when he arrived as somebody who seemed likely to need two or three years of molding.

It might still take him another season or two to become a starter with Munford returning for one more campaign at left tackle and Petit-Frere and Johnson both bringing elite potential to the position as well. But Jones is already showing that he’s going to be a valuable piece of the depth for possibly the nation’s best offensive line, and he’s only going to get better for Ohio State.