The speculation, debate and conversations about Ohio State never end, and Lettermen Row is always ready to dive into the discussions. All week long, senior writer Austin Ward will field topics about the Buckeyes submitted by readers and break down anything that’s on the minds of the Best Damn Fans in the Land. Have a question that needs to be tackled, like the one today about Ohio State and Demario McCall? Send it in right here — and check back daily for the answers.

Is Demario McCall getting reps running back with that injury situation?

Demario McCall is probably not the permanent solution at running back for Ohio State.

In the short term, the Buckeyes are almost certainly going to need him to help take a couple reps and few carries off the shoulders of Steele Chambers, who is currently the only healthy scholarship running back on the roster. But by training camp and the start of the season, it seems clear where Ohio State believes he has the best chance to succeed — and that’s not in the backfield.

Certainly the picture has changed somewhat dramatically for the Buckeyes already in camp with Master Teague suffering a torn Achilles during the first practice of spring. And it’s also true that the program always had some plans to work McCall into the rotation occasionally at running back, leaving that option open if needed by keeping him in the loop.

Somebody with McCall’s speed, elusiveness and confident mentality can never be counted out as a potential contributor, which is why the conversation about his role with the Buckeyes is now spilling over into a fifth year. But it’s also worth a reminder that he’s had plenty of chances to make an impact at running back previously, and the fact that it’s never clicked there is one significant reason Ohio State had him working at wideout this spring in the first place.

“Demario can still do [running back], though,” Day said last week before the Teague injury. “We’re just starting him out at slot, and we can always bring him back. He has that skill set. It’s something that we’ve always tried to find that role for him where he can be a running back and also be a matchup problem for teams like that. 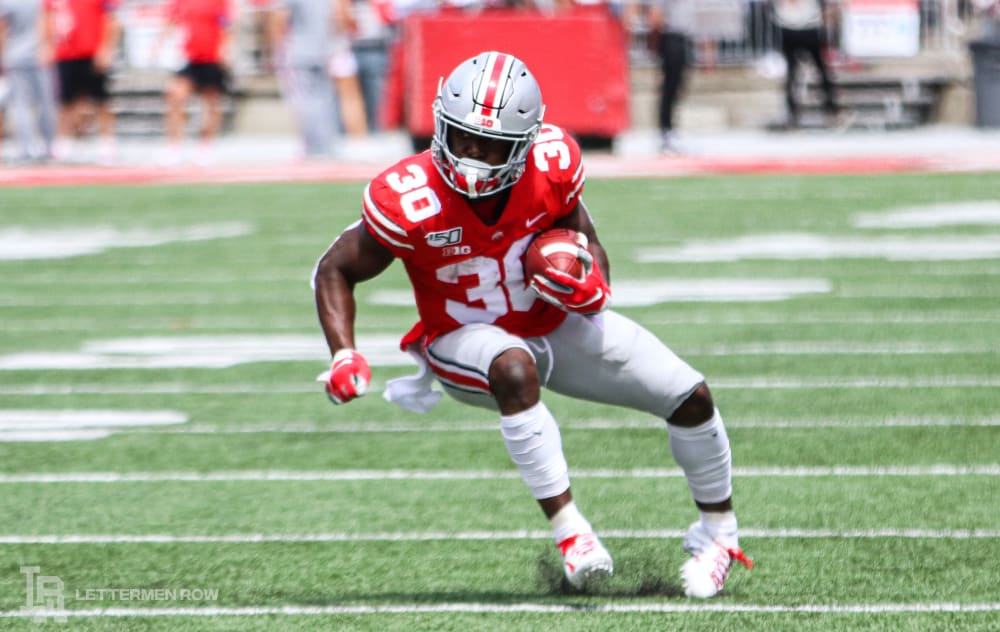 “This spring he’s going to play some running back. He’s going to line up at slot and do both of those things.Â But, yeah, we’re going to get Marcus [Crowley] back before the season starts. And then we have Miyan [Williams] coming in. Once we get to the summer, we’ll be whole.”

That’s obviously no longer the case anymore with sources indicating to Lettermen Row that Teague has had surgery on his Achilles and is facing a road to recovery that could potentially make it tough for him to get back in time for the start of the season. The exact timeframe remains unclear for Teague at this point, and his absence will obviously create a new challenge for Ohio State in remaking the rushing attack. But he also wasn’t likely to become the all-encompassing, do-everything tailback that J.K. Dobbins was last year, so the Buckeyes were already experimenting with different looks for the rushing attack with or without Teague.

McCall can be a part of that effort even without lining up at tailback. And based on the small sample size last week that included an impressive touchdown grab late in the opening practice, leaving him at wide receiver, letting him create mismatches and maybe having him bolster the rushing attack with jet sweeps or pop passes is probably the best way to utilize his skills.

Plans can obviously change in a hurry, as Ohio State found out yet again shortly after camp opened. But the Buckeyes don’t need to make any panic moves and abandon the plan for Demario McCall just to get through the spring, either.