The athleticism remains fresh in mind.

So much so, in fact, that Chuck Kyle recalls the recruitment of Dreâ€™Mont Jones by a Big Ten school not named Ohio State.

That program had a vision for Jones, the reigning Big Ten Defensive Player of the Week following his six-tackle, pick-six performance in the Buckeyesâ€™ come-from-behind win against TCU, isnâ€™t recounted for its hopes to sign him as an defensive stalwart.

â€œWhen he was being recruited his senior year, most of the colleges and a number of Big Ten colleges, they were of course saying they were recruiting him for defense,â€ Kyle told LettermenRow. â€œBut there were a couple talking to him about playing tight end. One was a Big Ten school. They said, â€˜We use our tight end quite a bit.â€™

â€œIt was clear we were dealing with a very, very fine athlete that could handle the characteristics of offense and defense. I think itâ€™s pretty clear what his future is on defense, that heâ€™s going to have a chance in pro football.â€

Kyle counts former players and coaches, now in the NFL and professional ranks, among his gridiron progeny. He doesnâ€™t, however, first focus on the considerable athleticism of the 6-foot-3, 286-pound Jones in discussing his former pupil. 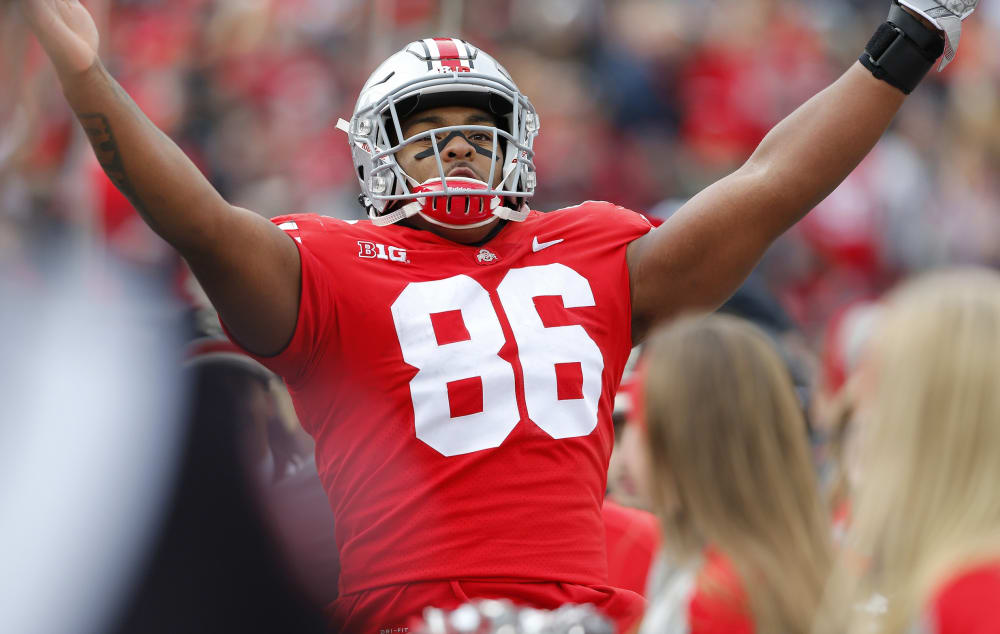 Instead, Kyle regularly heralds Jones to his current Wildcatsâ€™ team for his classroom efforts.

â€œBelieve me, I use [Jonesâ€™ academic success] every day. I do,â€ said Kyle, whose gilded resumÃ© includes 11 state and three national championships. â€œHereâ€™s young freshmen or kids who visit that may come to our school, and itâ€™s great to be able to say, â€˜You see that guy who intercepted that shovel pass? Yeah, well he went to school here. Heâ€™s Big Ten All-Academic.â€™ You should see their eyes. Itâ€™s like, â€˜Whoa, thatâ€™s impressive.â€™

â€œItâ€™s a very, very good learning tool. It kind of reflects back to Anthony Gonzalez, another former Buckeyes player, who is running for Congress now. He was an excellent student. Made huge plays for Ohio State, was a wide receiver with Peyton Manning. Then he got his graduate work at Stanford, goes on to get his M.B.A., and now it looks like heâ€™s going to be our Congressman.â€

This, of course, does nothing to diminish what Jones is doing on the field for an Ohio State defense now dealing with an injury to star Nick Bosa and still settling itself in the back-seven. Four of Jonesâ€™ 11 tackles through three games are for losses; he owns three sacks, a pass break-up and the sideline-cutback pick-six.

â€œYou never envision scoring a touchdown as a defensive tackle,â€ Jones said. â€œI would love to get another one.

â€œFinally I feel like I have more snaps under my belt. Iâ€™m getting a rhythm this season.â€

Itâ€™s a rhythm with roots on both sides of the ball, as well as the hardwood, from Jonesâ€™ prep days. His senior stats from the 2014 campaign at St. Ignatius show a player with the skill-set to compile team-bests with 58 tackles, four forced fumbles, a fumble recovery for a touchdown and 16.5 tackles behind the line, good enough for second-most on the Wildcatsâ€™ roster.

Oh, and Jonesâ€™ offensive skills from his senior campaign in high school include two more touchdowns on eight receptions for 193 yards.

â€œOne thing that always caught your eye about Dreâ€™Mont Jones is that he is just very athletic,â€ Kyle said. â€œYeah, he was an All-State football player but he was the best basketball player we had on the team — a power forward-type guy. He would do the dirty work, getting a rebound and sticking it back in.

â€œBut on the football field, weâ€™re a program that doesnâ€™t really want to be having guys go both ways. A guy like that, he was actually a very good tight end. He would make some impact plays at tight end. By his sophomore year, it was pretty obvious he was going to be an impact player. He was a competitor, really enjoyed competition. The excitement of it, challenge of it.

â€œYou can see it on the football field today.â€

Who knows? You might soon see it again in an end zone near you. 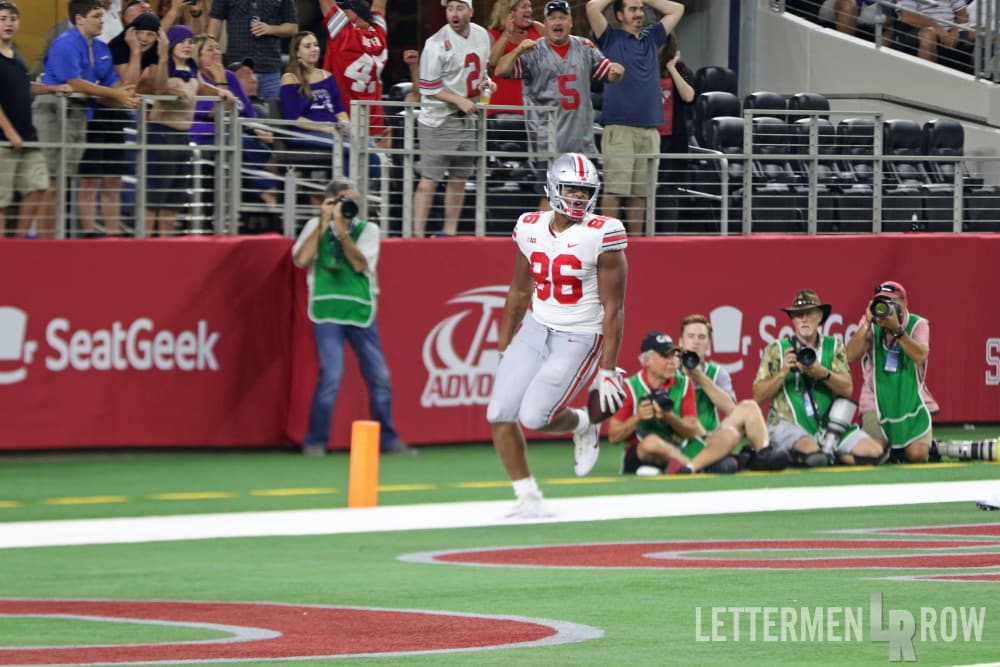 Dre’Mont Jones celebrated a touchdown in the Ohio State in over TCU. (Birm/Lettermen Row)