COLUMBUS — Drue Chrisman expected to be a little rusty.

During the season, the Ohio State punter issues a self-imposed ban on one of his two favorite types of flipping. Right now, bottles are out, the field is in.

But on Wednesday morning after class, Chrisman strolled into the Woody Hayes Athletic Center willing to make an exception and teach a complete amateur the secrets of his favorite hobby, the one he discovered by chance purely by scrolling through Twitter. He grabbed five cold water bottles, drained them down to roughly a quarter of the way full — and one after another, effortlessly tossed them in the air with full revolutions into perfect, rightside-up landings.

So much for being out of practice.

â€œItâ€™s the ultimate party trick,â€ Chrisman joked. â€œWhen I saw it on Twitter, the first person I showed was actually my mom. My mom loved it. Then I flipped one for her, and she loved it even more. She was like, â€˜Man, I think youâ€™ve got something here.â€™

â€œI just started practicing that night, and the next day I was doing it at school. Then I started making videos and it started catching on, then the whole correlation of flipping the bottle and flipping the field caught on, too. It just became my thing. Instead of playing a video game, Iâ€™ll just flip a bottle.â€

Not, of course, during the season. Unless heâ€™s asked specifically to break his rule, in which case Chrisman views it as charity outreach to spread the word about the pleasure that comes from being able to learn a trick that isnâ€™t as simple as it looks.

After countless hours of practice, Chrisman has learned which bottles work best, and he swears the refrigerators at the Ohio State practice facility stock the most elite brand for flipping. Ideally, room-temperature water is preferable to cold. He recommends getting the contents inside the bottle moving before release, and itâ€™s imperative to have some strong wrist action.

Mentally, it takes a blend of composure and confidence, which for a punter who performs in high-stakes games on the biggest stages in college football, doesnâ€™t ever appear to be an issue.

â€œThere probably isnâ€™t as much carryover between them as Iâ€™d like to think there is,â€ Chrisman said. â€œBut I think it definitely takes a certain amount of concentration to do them both. You know, being able to flip it perfectly every time, you canâ€™t be jolty with it. Like a punt, itâ€™s got to be a smooth drop, just like the smooth flip.

â€œBut I keep them separate [now]. I donâ€™t want people believing that Iâ€™ve just been spending all my time flipping a bottle and thinking: â€˜You should be practicing and actually punting a ball.â€™ That takes a backseat during the season.â€

Maybe that explains Chrismanâ€™s strong start with the flips that matter to the Buckeyes, maybe not. Either way, Ohio State canâ€™t complain with how heâ€™s handled his role so far on special teams.

Through 11 attempts early in the season, Chrisman is averaging more than 42 yards per punt. Heâ€™s boomed a long of 65 already, an incredible field-flipper against Oregon State that finished at the 3-yard line and set the table for a defensive touchdown two plays later. Chrisman has also pinned 8 of those attempts inside the opponentâ€™s 20-yard line, and he executed exactly what Ohio State wanted last week against TCUâ€™s vaunted special teams, holding them without a punt-return yard.

â€œThey have a punt returner and kick returner that is one of the best I’ve seen, certainly in the last 10 years,â€ coach Urban Meyer said. â€œWe knew that going in. Kind of took your breath away as you’re getting ready to watch him play.

Thatâ€™s the ideal outcome for Chrisman, and a product of countless hours with a football in his hands instead of a water bottle. 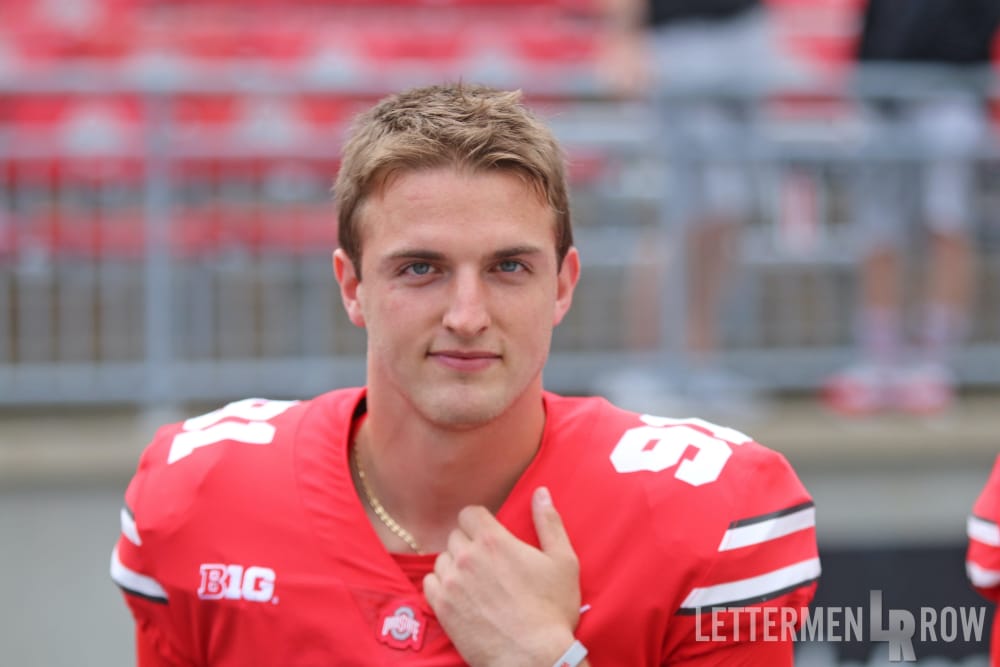 There are times when the two can be blended together, and heâ€™s used his teammates before to create social-media videos showing off some of his bottle-flipping exploits. Heâ€™s also been challenged a few times by Buckeyes in the locker room to head-to-head battle bottles, which can keep the mood light for a national-title contender and give Chrisman another way to showcase his gift.

â€œI mean, guys like it a lot,â€ long snapper Liam McCullough said. â€œItâ€™s fun, Drue is funny and heâ€™ll run around and do it in a guyâ€™s locker or have somebody put a book on their head and heâ€™ll flip a bottle on it. Itâ€™s kind of fun.

â€œDrue Chrisman is just a great guy, thatâ€™s a cool thing about the specialist group is we donâ€™t have any bad guys. Drue is a guy who works hard on the field, works hard in the classroom, heâ€™s real close with his family. I mean, heâ€™s just an all-around good guy.â€

When Ohio State needs to flip a football field, obviously Drue Chrisman has a strong leg that can handle it.