The speculation, debate and conversations about Ohio State never end, and Lettermen Row is always ready to dive into the discussions. All week long, senior writer Austin Ward will field topics about the Buckeyes submitted by readers and break down anything that’s on the minds of the Best Damn Fans in the Land. Have a question that needs to be tackled, like the one today about the NFL Draft stock of Dwayne Haskins? Send it in right here — and check back daily for the answers.

@AWardSports what should we think now that @dh_simba7 is not going to the draft?

Silly season ahead of the NFL Draft is officially here. When stories about the stock of Dwayne Haskins sinking for no good reason start popping up, clearly the nonsensical part of this cycle has arrived.

No, Dwayne Haskins isn’t going to be in Nashville for the first round of the draft. And that could certainly feed into a narrative that there are concerns about how early the former Ohio State quarterback should be taken. Haskins confirmed to Lettermen Row on Tuesday that he’ll be at home with his family for a watch party, and it’s worth a reminder that somebody as proud of where he comes from and tight with his inner circle might not care that much about hugging Roger Goodell on a stage in Tennessee. That’s not usually an offer that players turn down, obviously, but it’s unlikely to faze Haskins any.

It’s also probably not the best way to evaluate where Haskins sits on draft boards right now, because there are almost certainly six teams in need of a quarterback putting out smokescreens hoping that the most professional-ready passer in the pool falls to them. For starters, it’s almost inconceivable that the New York Giants or Cincinnati Bengals wouldn’t jump at the chance to grab him and begin planning to build around him for years to come. But no matter what happens, it’s a safe bet that Haskins will make the teams that pass on him pay. 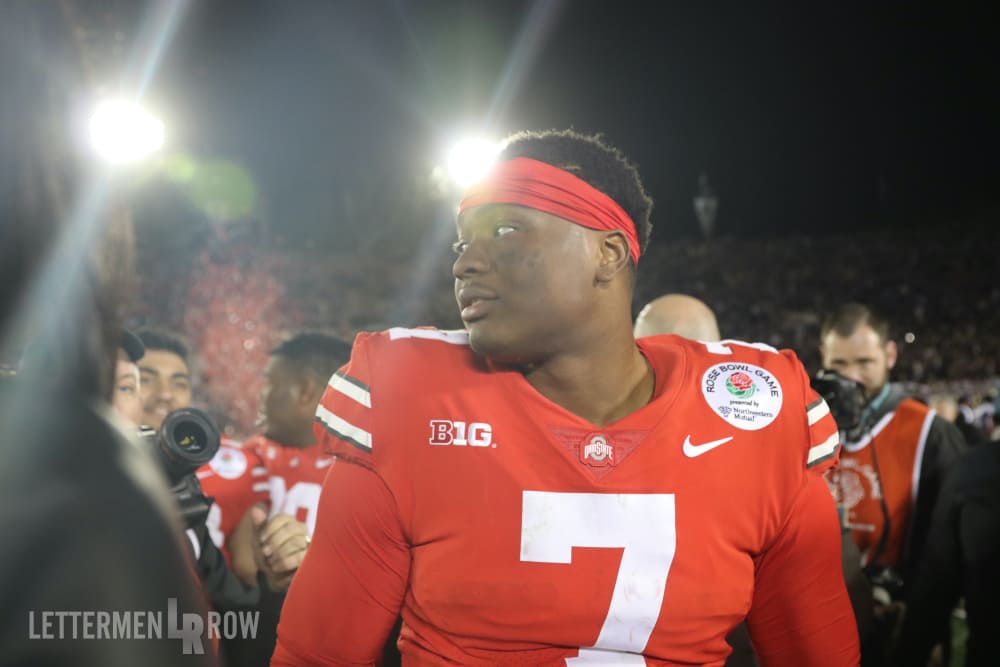 What, Haskins doesn’t have enough experience? Sure, he was only the starter for one season. But that year just happened to be the most prolific in Big Ten history, came in an offense with next-level responsibilities and also featured his best performances against the toughest defenses in the country. Haskins had nothing more to prove about himself as a college quarterback, and he made the right decision to leave in that regard.

Haskins didn’t run fast enough at the Combine? Big deal. Put on the tape and it’s clear to see Haskins using his size, strength and feel in the pocket to extend plays when he needs to — and there are even some clips of him running away from a couple defenders to pick up first downs with his legs. Plus, his arm more than makes up for whatever mobility he lacks compared to Kyler Murray.

Maybe there’s some weird concern about the relative lack of success from Ohio State quarterbacks in the NFL? Teams really have to be grasping at straws to find reasons not to pick Haskins, so maybe that excuse holds up as well as any — despite the fact he’s far and away the most pro-ready passer the program has ever seen. Haskins is a high-character person, has elite arm talent, is a devoted student of the game and just spent the last two years getting coached by an offensive coordinator with NFL experience. Honestly, it’s hard to imagine how any conversation about him sliding in the draft can be real.

The smart money is that it isn’t. But if it happens on draft night, Dwayne Haskins will have a list of teams that will regret it for years to come.