Granted, there is still only a small sample size to break down with the new starter at the most important position for the Buckeyes. But that was all it took for Troy Smith to come way impressed with what Haskins can provide in the role where he once thrived as the nation’s top player back in 2006.

Sitting down in the Lettermen Row film lab for his debut on BuckIQ, Smith popped in the film of Haskins on his first drive in The Game to get a better feel for what Ohio State should expect from him moving forward this season. Starting with Haskins coming off the bench with his team trailing in the cold against a Michigan defense that was one of the toughest in the nation last season, the stakes hardly could have been any higher or the pressure greater for a backup quarterback. 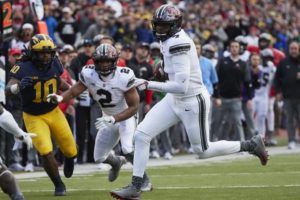 Haskins, of course, delivered in impressive scoring drive that highlighted his big arm, underrated mobility and poise leading the Buckeyes in less-than-ideal circumstances after J.T. Barrett was injured. That performance immediately helped establish Haskins as a legitimate heir to the throne at one of the most scrutinized positions in the country, and Heisman Trophy buzz has followed in short order with the redshirt sophomore now with the best odds on the Ohio State roster to end a drought that dates back to Smith’s win.

There is obviously still some uncertainty with Haskins since he hasn’t started a game in his career yet, and virtually all of his work in training camp has been done in private thanks to the media blackout at Ohio State this month. But there are still plays on tape that can provide a glimpse at Dwayne Haskins and his immense potential — and few people are more qualified to break him down than a Heisman winner.