Have a question about Ohio State recruiting? This is the place for you, five days a week. Submit your questions on Twitter or on the Lettermen Row forums. Check-in daily to see what’s on the mind of Buckeyes fans all over the country. Today’s question is all about Emeka Egbuka, who seems to be heading toward a college decision at the end of this week.

The long-time recruitment of 5-star wide receiver Emeka Egbuka is in its final days.

With one week left before the December signing period begins, the nation’s top-ranked wideout has made his highly-anticipated visit to Oklahoma. He went to Norman over the weekend and spent time hanging out with his father, Henry, and a number of Sooners commitments and targets — including 5-star quarterback Caleb Williams, who has become a driving force in the push they have made in the last four months. Egbuka, thanks in part to the NCAA permitting recruits to attend games as “fans” in conferences where fans are allowed at games, was in the stadium as the Sooners beat Baylor, so he was able to get some feel for the program during a game day.

As expected, upon his departure from Oklahoma, reviews from the trip began coming in. Each one, it seems, has been more glowing than the last. Oklahoma commitments are reacting as though the 6-foot-1, 190-pound speedster has the intention to join them in the 2021 class, and the media associated with the Big 12’s flagship program are “working sources” to confirm that the big news is coming. Cautious optimism abounds.

And that’sÂ probably fair. Lettermen Row has been saying for months that it’s not exactly ideal for the Buckeyes pursuit of Egbuka that making a visit to Norman was such a priority for Brian Hartline’s top target. If the NCAA-mandated dead period would have actually been a dead period, rather than the Loophole Period that it’s turned out to be, it’d likely have been a good thing for Ohio State. But, again, Egbuka was adamant for months that he’d never make a decision of any kind until he visited Oklahoma.

Now he’s set to announce a decision on Friday.

Over the months as we’ve written about Egbuka, there’s one thing that I’ve tried to make clear: He is not a typical recruit and definitely not the typical wide receiver prospect.

He is pensive. He is thorough. And he is logical.

There have been visits to many schools over the last 18 months, and at each turn the buzz coming out of the trip was that a commitment could be coming. At each turn, he stopped, sorted out his feelings and then carried about business as usual. Is this time going to be different? 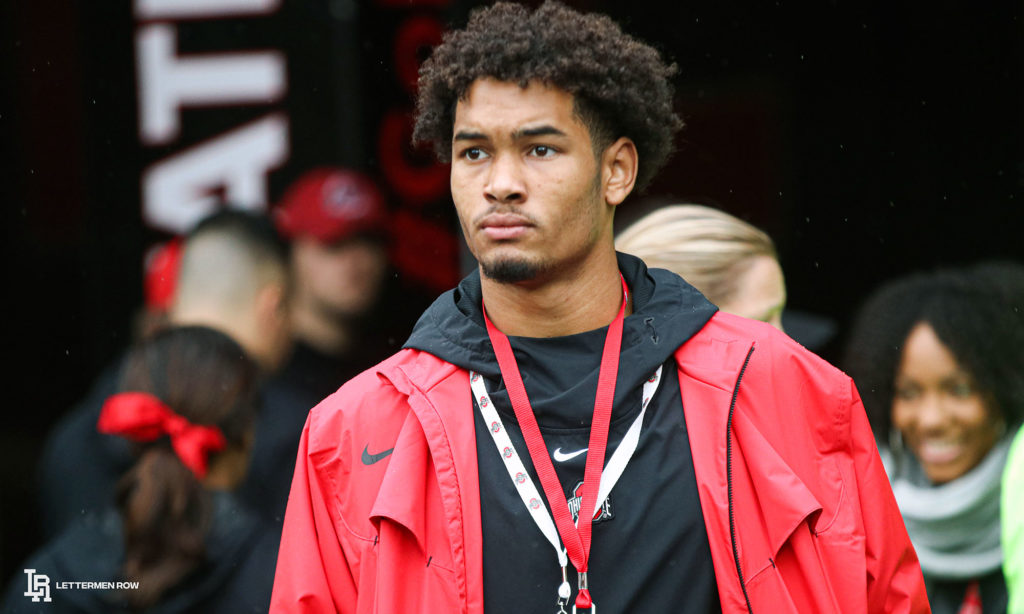 The timing of the Oklahoma visit ahead of a potential signing next week is more coincidental than anything else. If he could’ve made it to see the Sooners in August like originally planned, a decision was still not going to happen until next week. Still, it’s not going to leave Ohio State feeling warm and fuzzy because recency bias and post-visit glow affect the average recruit quite a bit.

In speaking to some folks close to the recruitment of Egbuka, there was not much concern from the Buckeyes side of things heading into his trip last weekend. Coming out of it, there’s more — but again that’s to be expected anytime a top target visits one of the few programs in the country that rivals Ohio State in terms of history, offensive production, development, etc. Oklahoma is a top-five program and can’t be waved away.

Buckeyes opponents will point to Julian Fleming, Gee Scott and Jaxon Smith-Njigba as reasons to avoid joining that depth chart, but Brian Hartline and company will need to point out that Oklahoma signed three top-10 receivers in 2019 and its leading receiver right now is a true freshman. The path to playing time isn’t easier in Norman, in fact it may be a bigger challenge because four of the Sooners top-five receivers are sophomores or younger — and two members of that 2019 haven’t seen the field much yet, including former No. 1-ranked receiver Jadon Haselwood.

If the argument is from a production standpoint, yes, right now Oklahoma usesÂ more players. But in five games, there are two Ohio State receivers with more catches and more yards than any Sooners receiver has in 10 games. If Egbuka decides to enroll early, he’s going to be closer in terms of college football readiness to the Buckeyes freshmen, who’ve been hampered by the Big Ten’s lack of games this season.

But the bottom line here is simple: If the Buckeyes want to see fruit from a nearly two-year recruitment of Emeka Egbuka, they have to win the relationship battle while also showing him how their program will better develop him on and off the field.

Brian Hartline’s relationship with Egbuka and his family has been strong. So is Ryan Day’s. The Buckeyes were informed of the visit to Oklahoma before it happened and have spoken with Emeka Egbuka since he returned. There has been, to this point, no decision relayed to the Ohio State coaching staff. If the emotional reaction can be avoided for a few days longer, there’s no reason to think that the Sooners trip provided him anything he’s not experienced before.

There’s just days to go before a decision, but for now, Ohio State is holding on in the battle for Emeka Egbuka. Can the Buckeyes come out on top after almost two years of being the leader in his recruitment? Did Oklahoma do enough to overtake Ohio State? Will the pandemic and proximity to home give him a reason to stay home at Washington?

The country will find out in three days but it’s hard to imagine any relationship better than the one this young receiver has with the Buckeyes and because of that, I still think he’ll end his recruitment with a commitment to Ohio State.