Think back to those names that will forever be remembered for Ohio State’s magical run to the first national championship of the College Football Playoff Era. Where is Evan Spencer slotted on that list?

Wherever that name ranks now, think about moving it up quite a few rungs closer to the top.

Maybe he’s already on that short list near the top for some people. And if that’s the case, perhaps this first edition of a throwback version of BuckIQ isn’t exactly necessary to refresh the memory — in which case, it can just be enjoyed for a unique two of the most memorable plays of the Sugar Bowl upset of Alabama. 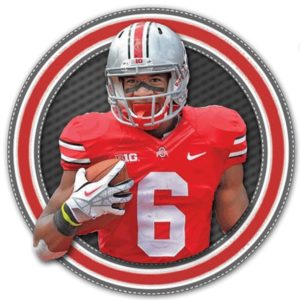 Evan Spencer was a key piece for Ohio State on the way to the national championship in 2014. (Birm/Lettermen Row)

But if Spencer’s role and importance to the Buckeyes has somehow started to fade from memory, this should be a useful, educational episode as the man himself reflects on his touchdown throw and a key block that would help pave the way for Urban Meyer’s program to head to the title game.

Cardale Jones was phenomenal. Ezekiel Elliott built his legend over those three postseason games alongside him in the backfield. Michael Thomas proved once more that he was an aerial acrobat with his toe-tapping touchdown grab. And obviously that’s just scratching the surface for a loaded roster of Ohio State players who had to shine before getting their hands on the championship hardware.

Evan Spencer deserves a share of that top billing as well, with that semifinal performance proving exactly why Meyer and the Buckeyes counted on him so much as a glue guy and leader in the locker room all year long. And now here as a contributor at Lettermen Row, he’s helping kick off what should be a fun variation on our game-film breakdowns that will look back on some of the best plays in school history from the perspective of the Buckeyes who produced them.