COLUMBUS — Ohio State football will be back.

The Buckeyes are just still in the process of figuring out exactly when that will be.

All athletic director Gene Smith knows for certain at this point is that his program is fully prepared when the Big Ten again gives the green light, and the strong protocols in place for Ohio State give it faith it could execute the winter or spring season that is currently in the works.

“We want to play the game,” Smith said in an open letter released by the Buckeyes on Wednesday night. “We will have our student-athletes back to competition as soon as possible.

“The Ohio State University is confident that we have the safety protocols and rigorous safeguards in place for our student-athletes to practice and return to competition immediately. While a decision has been made by the presidents of the Big Ten Conference to postpone the fall season, we view this as a temporary delay, and Dr. Johnson has directed us to prepare for the possibility of bringing at least some of our fall sports back to practice and competition by the end of the year. We are actively planning for the winter and spring seasons for all sports, including the return of football.” 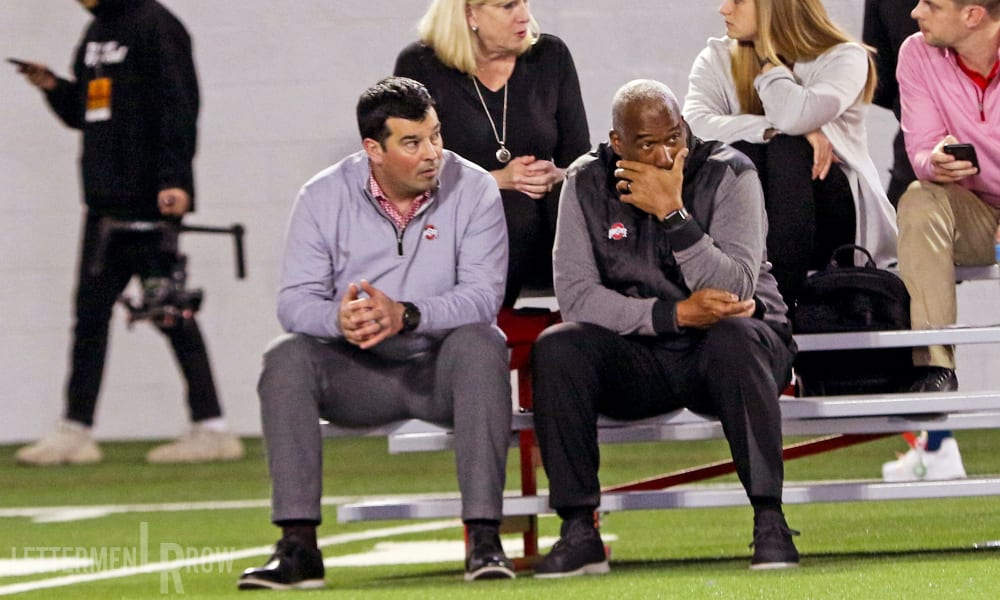 The Buckeyes should be able to resume workouts again on Monday thanks to an NCAA decision that will allow 12 hours of activity for football programs dealing with a postponement, which Big Ten commissioner Kevin Warren reiterated would be the case for the league this fall in his own letter posted on Wednesday.

When will the next game be for the talent-laden, three-time defending conference champion Buckeyes? That is still to be determined, but multiple sources have confirmed to Lettermen Row that momentum is growing for a schedule that would start in January and include domed facilities around the conference footprint.

Ohio State coach Ryan Day, Gene Smith and school president Kristina Johnson will all have some influence on what that plan will look like moving forward. And Smith helped set the course with his letter to the Buckeyes community, which can be read in its entirety here.

Lettermen Row will continue to update this story as it develops, and additional content is also available on our YouTube channel. 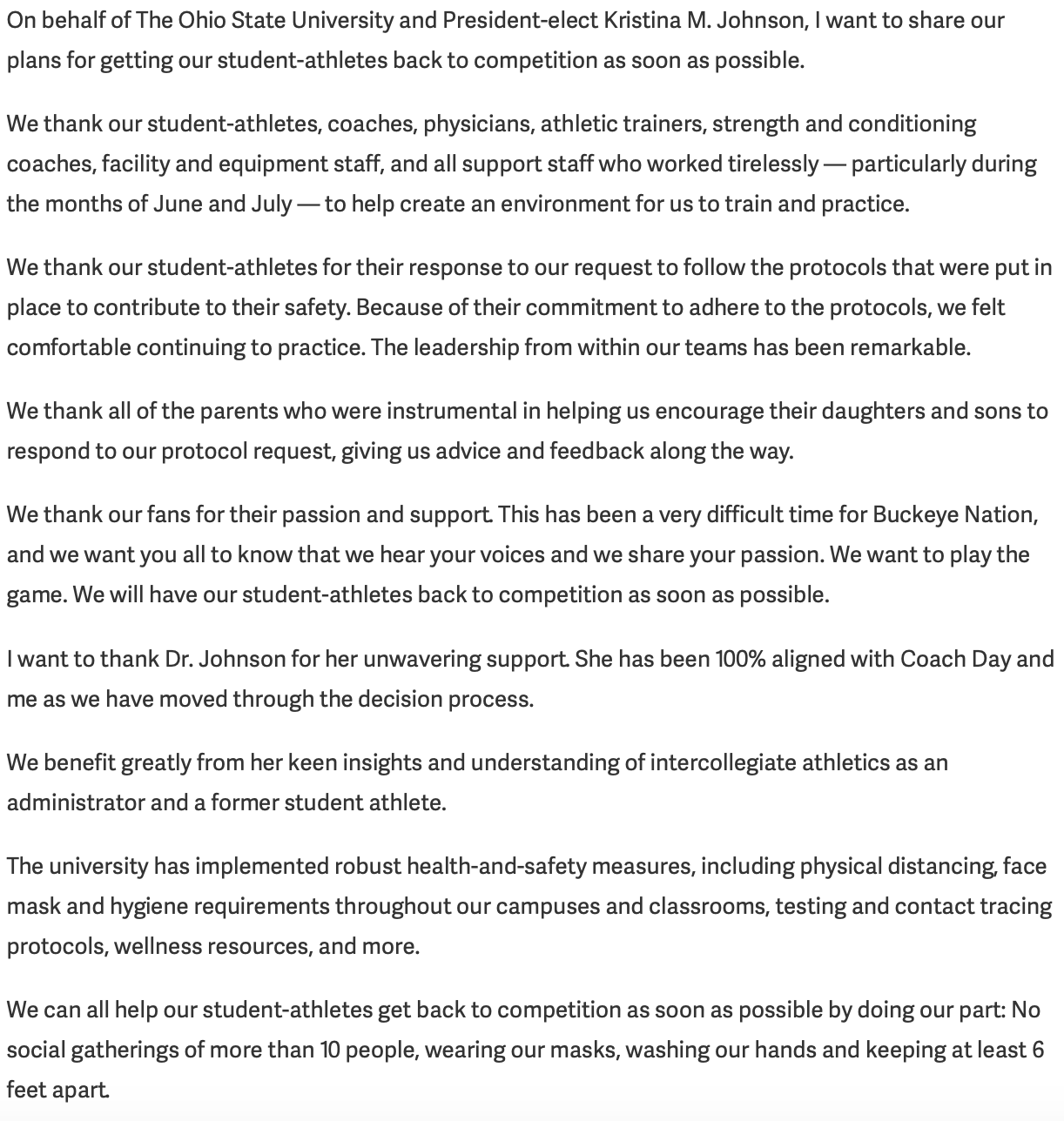 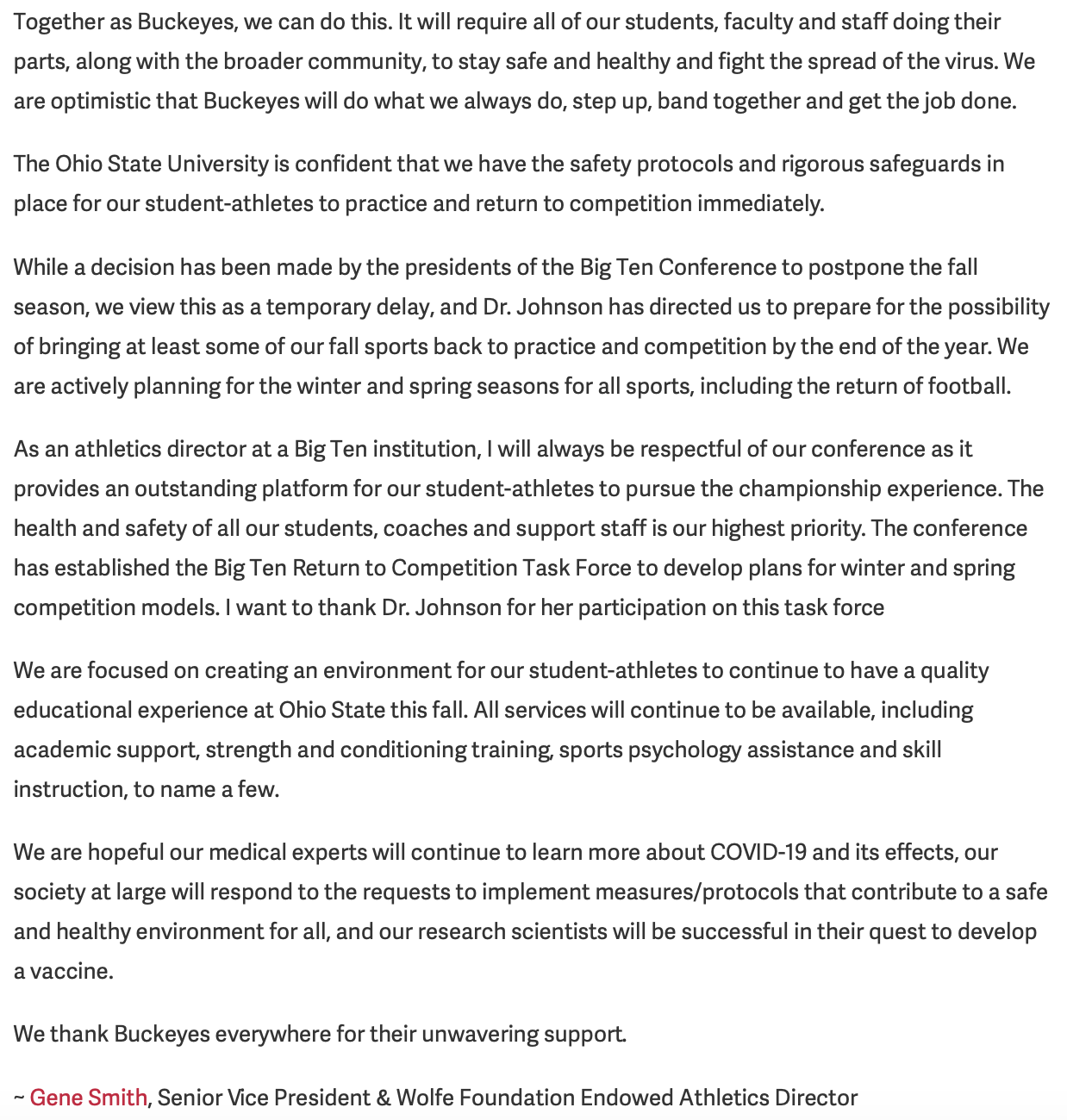