The speculation, debate and conversations about Ohio State never end, and Lettermen Row is always ready to dive into the discussions. All week long, senior writer Austin Ward will field topics about the Buckeyes submitted by readers and break down anything that’s on the minds of the Best Damn Fans in the Land. Have a question that needs to be tackled, like the one today about Ohio State and the potential starting spot for Harry Miller on the offensive line? Send it in right here — and check back daily for the answers.

Could Josh Fryar and Luke Wypler win starting jobs? Who has a leg up for the kicker and punting job? Chrisman was huge especially when it came to field position.

The slide out of the spotlight for Harry Miller over the last couple months was understandable.

There were occasional struggles with holding penalties at guard last season. He struggled with his snaps after being pressed on emergency notice to play center for a game. Then he spent spring camp recovering from a shoulder issue. Add in the buzz around some young guys and there just wasn’t a ton of attention to spare for the junior offensive lineman.

Whether that’s fair or not to Miller doesn’t matter. Because once he’s fully healthy, he’s going right back into the heart of the Ohio State offensive line and definitely shouldn’t be overlooked as one of the most important players on the roster this season.

So, can Luke Wypler or Josh Fryar earn a starting job? Both have the talent to be front-line assets for the Buckeyes, but there will almost certainly only be room for one of them once Miller gets back to full-contact work when camp opens in August. 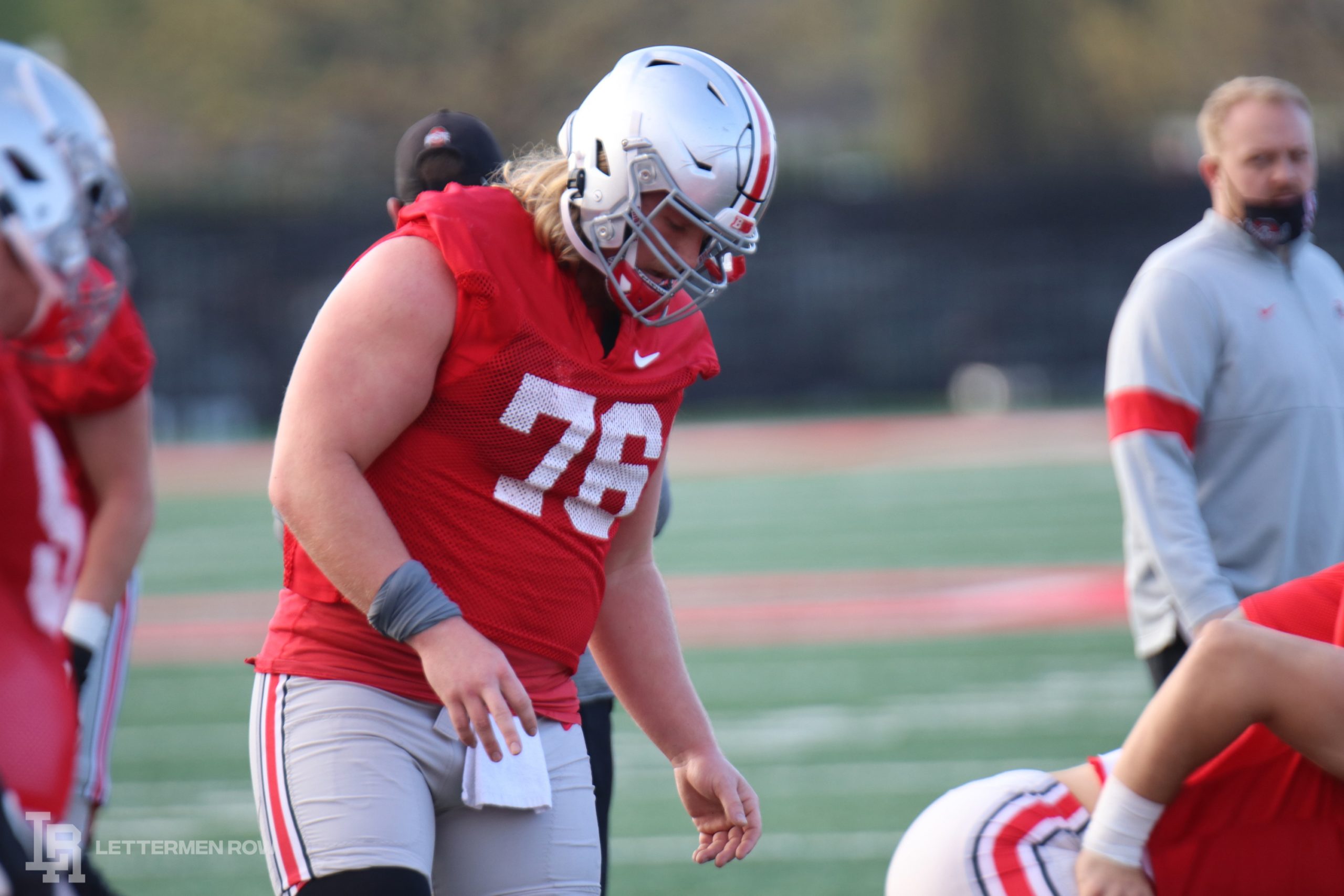 “Absolutely, thereâ€™s no question — I would assume [Miller] is going to be one of the best five,â€ offensive line coach Greg Studrawa said. â€œThese young guys are getting the reps and getting the work. But when the preseason comes, Harry is going right back into that mix â€” whether that be at center or at guard. Weâ€™re working on the best five, and I would assume he will be one of them. But weâ€™ll see.â€

Nothing is ever promised with the Buckeyes, and both Wypler and Fryar gave the coaching staff plenty to think about with strong spring practices. But even with some of the inconsistency Miller showed a year ago, it’s important to keep his sophomore season in perspective.

The former five-star recruit was a first-time starter working through the challenges of a year unlike any other, and a handful of Champion grades at guard were clear reminders of his potential up front. And while the rollercoaster ride at Michigan State raised eyebrows since Harry Miller has always been tabbed for a future at center, that start came without almost no advance warning or practice time after the Buckeyes had positive tests pop up on the offensive line late in the week. Neither of those are meant to be excuses for Miller, but the context is important in understanding why the Buckeyes haven’t lost even a shred of confidence in him as a potential anchor up front.

Now, it’s certainly possible that Wypler’s work at center in March and April could change the competition and configuration of the unit in August. But he’s also still early in his development as a second-year player, and both the Big Ten experience and Miller’s knowledge of the offense are probably going to give him the edge. With Paris Johnson chiseled into one of the guard spots, that leaves Wypler, Fryar and Matt Jones likely jostling to complete the unit.

It’s a huge bonus for the Buckeyes that two of those three could snap if needed. But the favorite for that role remains a healthy Harry Miller, and he should be back in the center of attention soon enough.